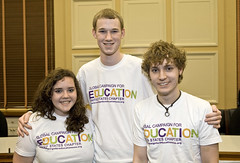 So afters weeks of anticipation the Global Campaign for Education Action Week is drawing to a close. I want to salute the thousands of educators and students who have already participated in the Worldâ€™s Biggest Lesson in 48 of the 50 states.

During my time in the US for GCE Action Week I also had the privilege to meet and spend time with some of the smartest and dedicated young people in the United States. More than 50 high school and college students came from around the country to learn about why education saves lives and about the Education For All Act of 2007. I was so impressed by watching these articulate youngsters come together for this cause and asking the â€œolder peopleâ€ some really smart questions about the sort of arguments they hear about why the US should not give financing for education overseas. 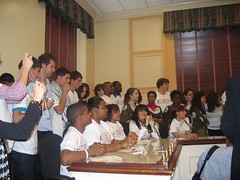 The big Congress day arrived and the buzz was infectious. The youngsters took the bull by the horns and met with 75 representatives and senators in a frenzy of 100 meetings running between the Senate and the House and back again. In the middle of it all, they participated in a press conference with the impressive Honorary Chairperson for GCE Action Week Shakira and Congresswoman Nita Lowey. However, it was the youngsters coming from 12 different organizations including a large delegation from the ONE Campaign who really made me proud. They were sharp and passionate. I felt for the first time in a few years the US might just take the leadership on Education for All in the coming years with activists such as these.