The Ebola outbreak in West Africa is the worst ever recorded. Over 1,100 people have died and the World Health Organisation has declared it a global health emergency.

The hardest hit countries are Liberia, Sierra Leone and Guinea, which have some of the weakest health systems in the world.  There are not enough trained doctors and nurses, clinics don’t have enough supplies to diagnose and treat patients, and villages lack running water or reliable electricity which only compounds the crisis.

Campaigning for long-term investments in global health systems has been a priority for ONE from the start. Almost 6 million members around the world have helped achieve remarkable progress in the fight against HIV AIDS, malaria and other preventable diseases.

ONE members have asked us how to help. If our governments don’t step up and pledge resources for the emergency response, we’ll be calling on you to use your voice. In the meantime, many other organisations that deliver vital services are already in West Africa, working hard to save lives and protect communities.

These are just some of the organisations you can support:

ActionAid volunteers are on the ground now in communities affected by Ebola in Sierra Leone. They’re going from house to house, helping people to understand what they can do to protect themselves and their families to limit the spread of the disease, and making sure they know where to go to get help if symptoms appear.

ActionAid are appealing for support so they can scale up their outreach and extend it to Liberia as well. 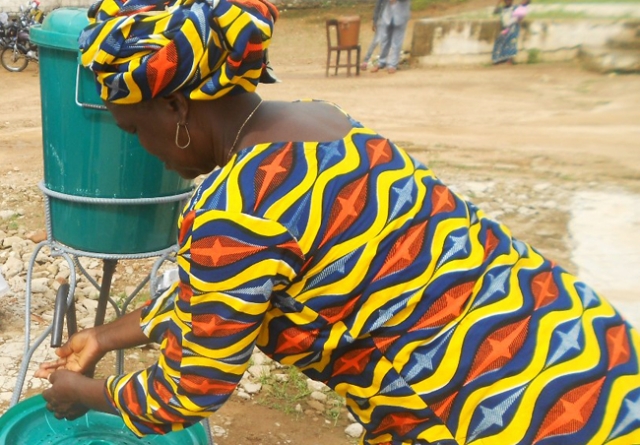 In Guinea, Caritas works with other rescue groups to distribute soap, chlorine and other materials to thousands of families. Credit: Caritas

Caritas aid workers in Guinea and Sierra Leone are going to remote villages, slums and towns to teach people about good hygiene and hand washing as a way to halt the disease. In Guinea, they have provided soap and chlorine, which are effective at killing the virus, to more than 100,000 people.

“We bring doctors and other professionals to do the training. Catholic school teachers, priests, we train them with all the messages of how to protect yourself. Then they go back to the parishes, and the catechists talk about Ebola, or priests talk about it during the sermon,” he said. 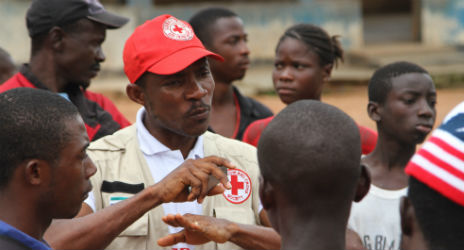 Sierra Leone Red Cross teams visit communities in the eastern district of Kailahun, to teach people how to protect themselves. Many communities remain in denial about the existence of the deadly virus. Photo: Katherine Mueller, IFRC

The International Federation of Red Cross and Red Crescent Societies has increased its response to the Ebola outbreak in Sierra Leone, revising an emergency appeal to provide support to the Sierra Leone Red Cross Society in assisting 6.3 million people who are at risk of being affected by the outbreak.

Activities focus on raising awareness about how Ebola spreads and how people can protect themselves, providing psychosocial support to those affected by the disease, and managing the burial of bodies.

Donate to the IFRC
Find out more about their Ebola response

MSF currently have 676 staff working in Guinea, Sierra Leone and Liberia, fighting to save the lives of hundreds of patients and contain the Ebola outbreak.  Thanks to the public’s generosity, they have the funds they need for this emergency, but are appealing for donations to help replenish and prepare for the next emergency.

Plan is on the ground fighting the outbreak in Guinea, Liberia and Sierra Leone. They are running public health information campaigns, providing medical kits, training health workers in effective infection control procedures and setting up hand-washing stations at schools, health posts and other public facilities to help keep families safe. 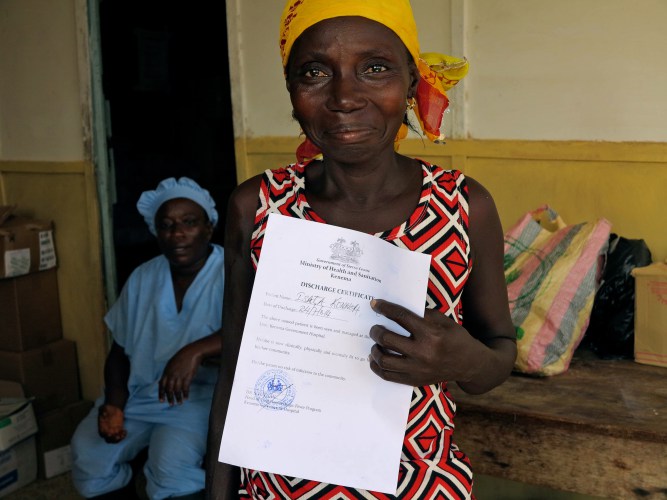 Isata Konneh from Guinea is an Ebola survivor. She shows off her certificate of good health. © UNICEF Sierra Leone/2014/Dunlop

UNICEF is working across seven countries – Guinea, Sierra Leone, Liberia, Guinea-Bissau, Senegal, Mali and Gambia – to prevent further spread of the virus, through mobile messaging and ongoing TV, radio and print campaigns. Since the outbreak was declared, UNICEF and its partners have reached at least 5.5 million people in West Africa.

In Guinea and Liberia, UNICEF and its partners have also become the main provider of chlorine and soap with more than 2 million bars of soaps and over 600,000 bottles of chlorine distributed in households, health centres and schools since April.

Donate to UNICEF
Find out more about their Ebola response