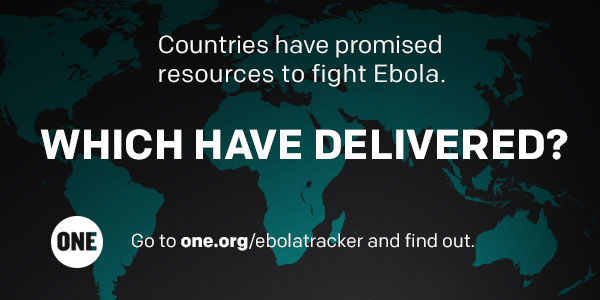 When crises like the West African Ebola outbreak hit, the job of advocates is to hold leaders accountable for their pledges, ensuring that countries deliver the services needed on the ground as quickly as possible in order to save lives and rebuild for the long-term.

There are many trackers monitoring financial pieces of the Ebola response, including those from the Office for the Coordination of Humanitarian Affairs (OCHA), the UN, and the World Bank.

But to get the full picture we need to understand the story behind the figures: Which countries have committed ambitious amounts? How much money is additional to existing commitments for health? How many are filling urgent needs by providing materials and health care workers?

Three weeks ago, we set out the latest on what key countries have promised—our best attempt at outlining which countries have committed most to Ebola across three categories: financing, health care personnel, and in-kind contributions.

Our work draws on data from the trackers mentioned above, but differs from existing analyses in also using press releases, information from government representatives, conversations with technical bodies and other research. Today, we’re launching that same data in an interactive format, so you can customise comparisons and dive deeper into countries’ commitments.

What are we looking for?

We are pushing governments to make sure pledges are:

What have we found?

Completing this data is not some dry accounting exercise. If we don’t know what’s really promised, no one can adequately match promised resources to needs on the ground. That means gaps cannot be easily identified, and time lags will result in more lives lost.

What’s to come in future versions?

The interactive tracker is a work in progress, and does not yet cover all countries that have made commitments to the Ebola crisis. In particular, we hope to expand the tracker in the weeks ahead by adding in two categories: the largest African contributions to Ebola, and laggards.

Although no African donor has yet contributed more than $10 million (our initial cut-off point for analysis), many have made significant and commendable contributions. In particular, Nigeria has pledged $3.5 million; Kenya, Namibia, and Cote d’Ivoire have each pledged $1 million, and Ethiopia announced a plan to donate $500,000. Just last week, the continent’s wealthiest individuals and firms announced a total commitment of $28.5 million.

The DRC, Nigeria, and the East African Community have led the way in promising health care personnel, committing more than 2,000 individuals to help on the ground. Countries like South Africa have contributed significant in-kind resources. And many African-based organisations are doing important work on the ground, delivering essential services to fight Ebola and expand prevention efforts.

These tables also do not call out the clearest laggards (although even many of those included could do far more relative to their GNI). Argentina, Portugal, Thailand, and next year’s G20 host Turkey are among countries which do not appear to have contributed any governmental cash assistance for Ebola and have given little in the way of in-kind assistance.

We recognise that the response data is shifting daily. To improve upon these tables, we welcome information and feedback from donors—and also from and partners and citizens; if you would like to clarify anything included here, please email Erin directly.

As Ebola cases continue to rise, no one should feel off the hook. Fighting Ebola is a race against time: the sooner we have quality information, the sooner response teams and donors can deliver what is really needed to contain this disease.

Join us in calling on world leaders to step their Ebola response: sign our petition