Photos by Patrick Adams, text by RTI International. Follow #NoMoreNTDs on Twitter to learn more about 10 years of U.S. government commitment to the fight against neglected tropical diseases. 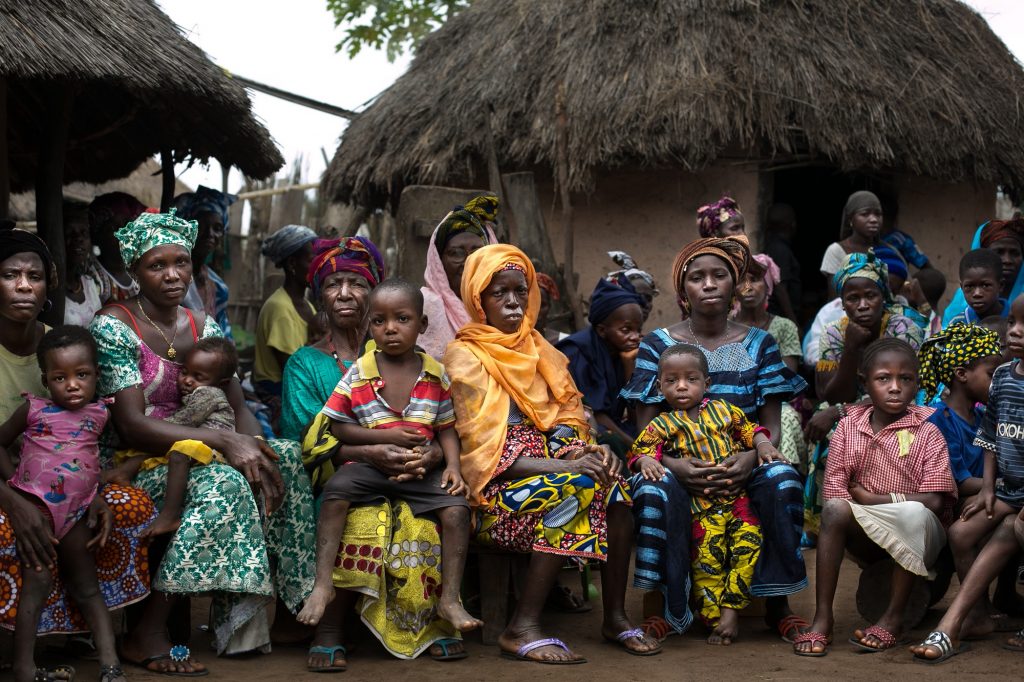 Women and children in Yereweliah, Guinea.

It’s midday in the village of Yereweliah, Guinea, but the scorching sun hasn’t stopped a crowd from gathering around a visitor from the capital city.

Dr. Andre Goepogui takes the opportunity to deliver a rousing speech that starts off educational: “If you take the medicine you can prevent disease. Children can go to school and people can go to work.” It ends motivational: “There are many villages, but we came here to recognise you. The world will know that people are well-informed and take their medicines in Yereweliah!” 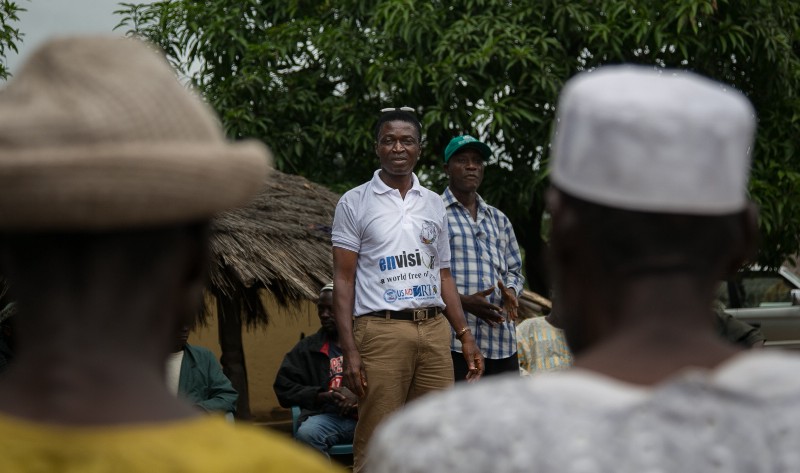 As head of Guinea’s national program for neglected tropical diseases (NTDs), Dr. Goepogui’s words are not just pageantry — they are part of a concerted effort to help communities understand and feel comfortable with government health efforts, like those to fight NTDs.

It’s an effort that’s particularly important as Guineans come to grips with the aftermath of an Ebola outbreak that tested their trust in a fragile health system. 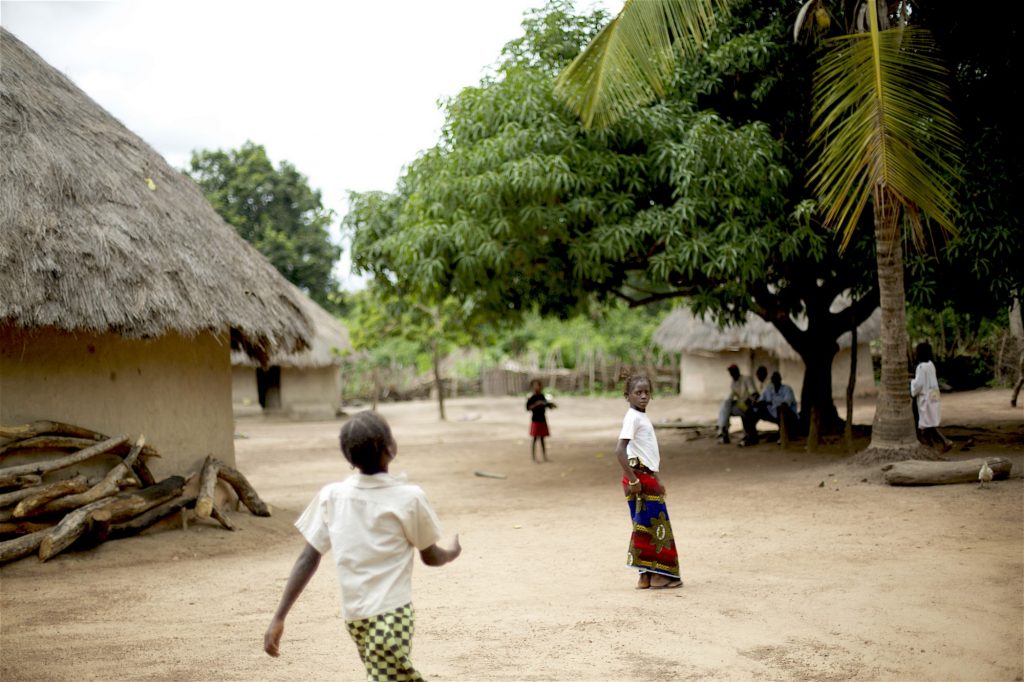 A winding and hilly 286-mile drive from the West African country’s capital city, Yereweliah is a village in Central Guinea’s Faranah district. It was less than 150 miles from here that the Ebola outbreak began in December 2013 — an outbreak that would wreak havoc locally and dominate global headlines. When the disease was stamped out in early 2016, it had claimed more than 11,000 lives — the vast majority in Guinea, and neighbouring Sierra Leone and Liberia. 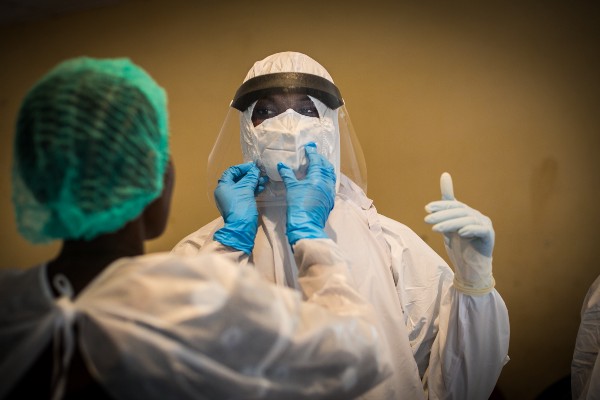 As a group of parasitic and bacterial diseases that affect the world’s poorest people, NTDs don’t often kill. What they do is cause pain, as well as lifelong disability and disfigurement. All Guineans are at risk for at least one NTD, but in Yereweliah — a particularly remote and vulnerable community — people are at risk for multiple diseases.

One month before Dr. Goepogui’s visit, Yereweliah participated in a mass treatment campaign to prevent two NTDs: lymphatic filariasis (LF) and trachoma. Commonly known as elephantiasis, LF can cause severe pain and disability, while trachoma can cause blindness.

For local health officials, these mass drug distributions are an opportunity to strengthen a battle-weary health system.

“Ebola tested the shaky trust that people had in health care providers. It also stretched our systems to their very limits. But we see that work to distribute NTDs medicines can help communities take ownership over their own health and trust the health system again,” said Dr. N’Faly Bangoura, Director of Health for the district of Faranah. 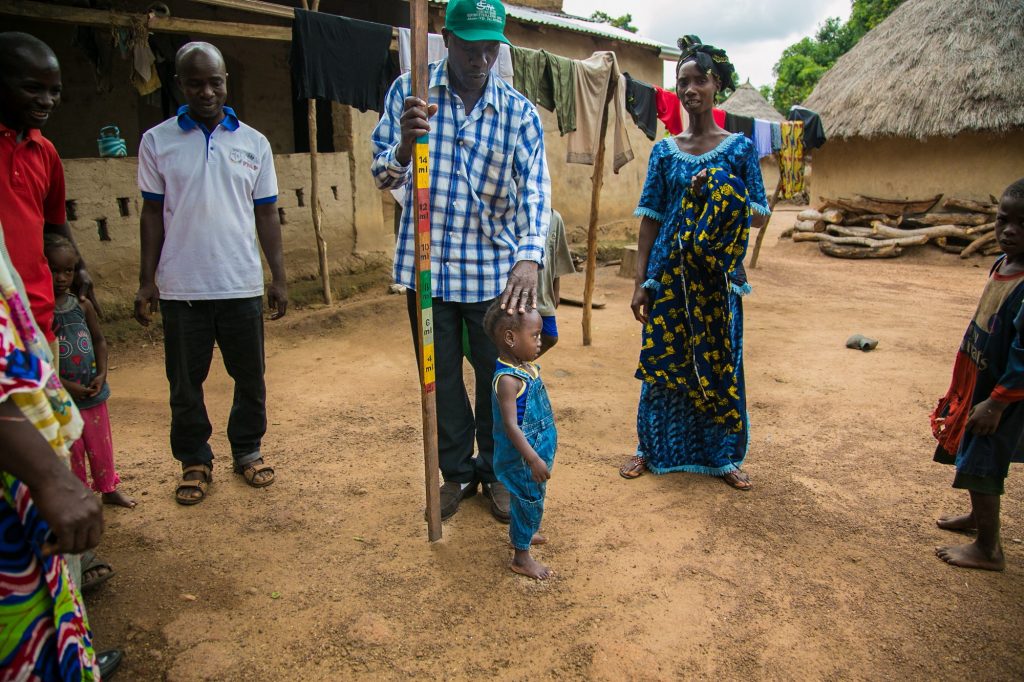 Toumany Conde, community health worker, demonstrates how he would measure a child in order to determine the correct medicine dose during a mass treatment campaign.

The government’s efforts to prevent and treat NTDs in Guinea are supported by the U.S. government through the ENVISION project — USAID’s flagship NTD program working with Ministries of Health in 19 countries to control and eliminate seven of the most prevalent NTDs. This year marks 10 years of U.S. government support for the fight against NTDs.

The ENVISION team realised Ebola was a game-changer in terms of how they built support for mass treatment campaigns.

“We always engaged local authorities, but we realised we had to engage community leaders and opinion influencers like Imams, to be successful post-Ebola. It’s interpersonal, starting from opinion influencers and mobilising family to family,” says Dr. Sylvain Haba, NTD Program Coordinator in Guinea for Helen Keller International, which works as part of USAID’s ENVISION project. 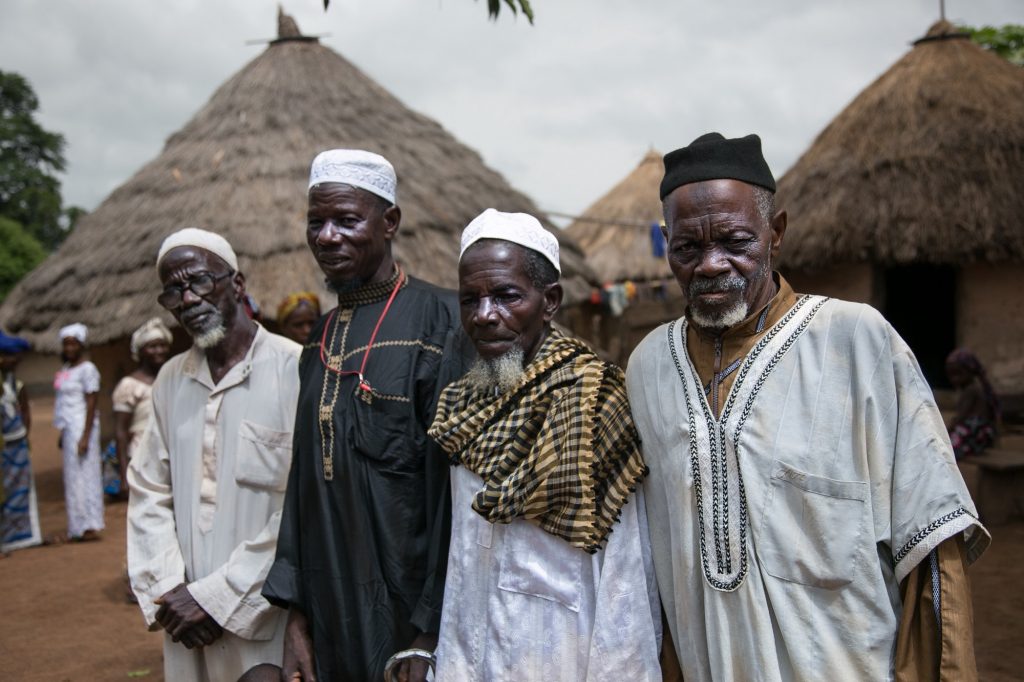 Imam Karifa Camara supported the drug distribution in Yereweliah. “We saw the impact of the first rounds of treatment on women and children. We became used to seeing people go blind from trachoma, but now that’s not the case. That’s why we encourage people to participate.”

The approach seems to be working. ENVISION found that participation in recent mass treatment campaigns was highest in districts with strong community leader involvement. 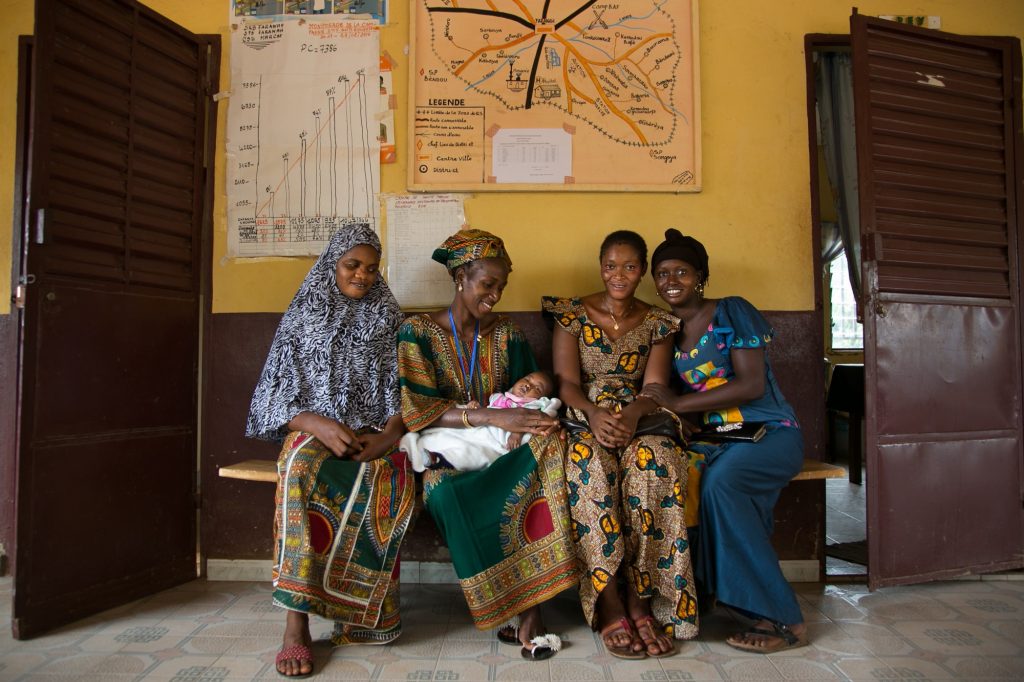 Women wait at a health centre in Faranah, Guinea.

And the massive coordination effort required to carry out mass drug distributions is also helping to strengthen links between all levels of the health system, and particularly at the community level.

The management of drug distributions happens at several levels: One person from the central government is placed in each district to work with district health officials, while heads of health centres — working with community leaders — directly supervise the volunteer community health workers distributing the medicines. 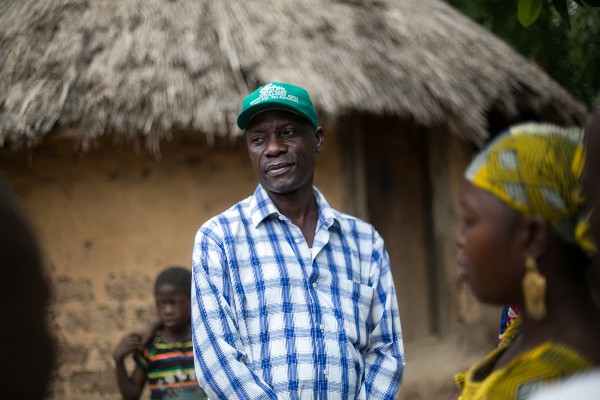 Toumany Conde has been a community health worker in Yereweliah since 2005, working on a variety of health issues. “My work was reinforced by the recent drug distribution. In trainings, I learned new skills like how to have a quality conversation with someone and how to properly discuss with them if they don’t want to take the medicine. Also, in former days, we were not as well known in the community. Now, we seldom meet someone who doesn’t know us.”

Conde says he’s now a “trainer who trains” other community health workers. “I’m not tired of this work because I can always learn more. Also, I am well-known here. There’s a strong link between me and the community.” 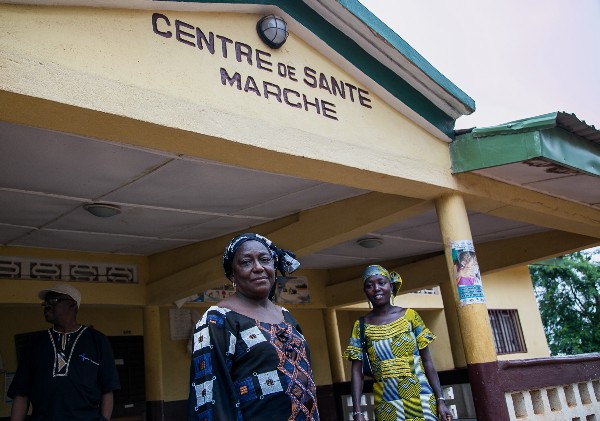 Mrs. Camara leads the health centre responsible for Yereweliah. A 45-minute drive over rough terrain separates the village and the health centre, so she doesn’t often get to visit the community. For her, drug distributions are an important opportunity to strengthen relationships with remote communities. “Together, we go from door to door, door to another door. There is no place we don’t reach. Since the first time we did the distribution, it has gotten much easier. More people are open to taking the medicine, which is proof that our approach has worked.” 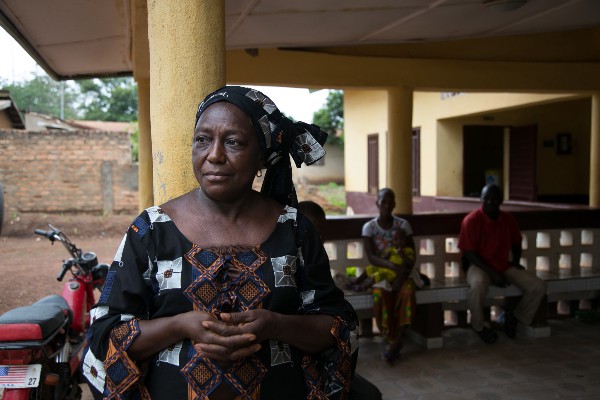 If there were a more popular person than Dr. Goepogui in Yereweliah, it would be Mrs. Camara.

When Dr. Goepogui calls Mrs. Camara “the president of this republic,” raucous cheers quickly turn into an enthusiastic call-and-answer session.

“Are her health agents doing good work in this community?” asks Dr. Goepogui. “Yes!” is the emphatic group response. 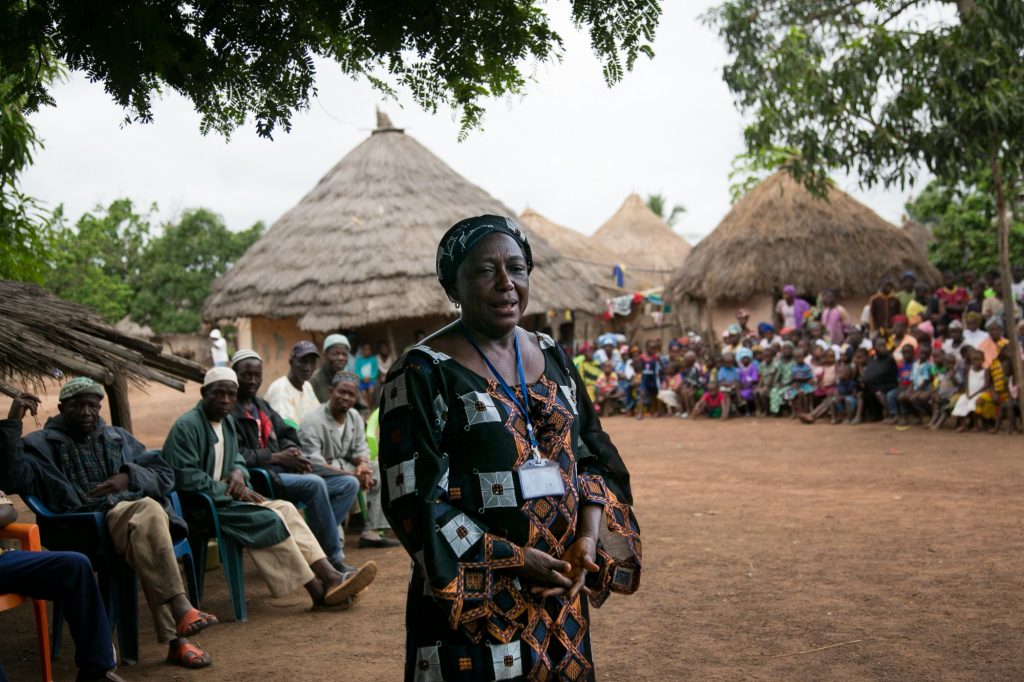 There is a lot of work for them to do. Guinea’s national NTD program is working to ensure every community at risk is covered by mass treatment campaigns, and also that each round of mass drug distributions reach enough people to be effective at controlling and eliminating these diseases. They aim to contribute their part in attaining global goals on the control and elimination of NTDs.

For Mrs. Camara, the fight against NTDs is part of the bigger mission to improve health in the area. “Now it’s often the village who informs us about a new sickness so we can act immediately. We learned from Ebola that this is essential. The village is essential. They are the ones who must understand what’s going on with their own health.” 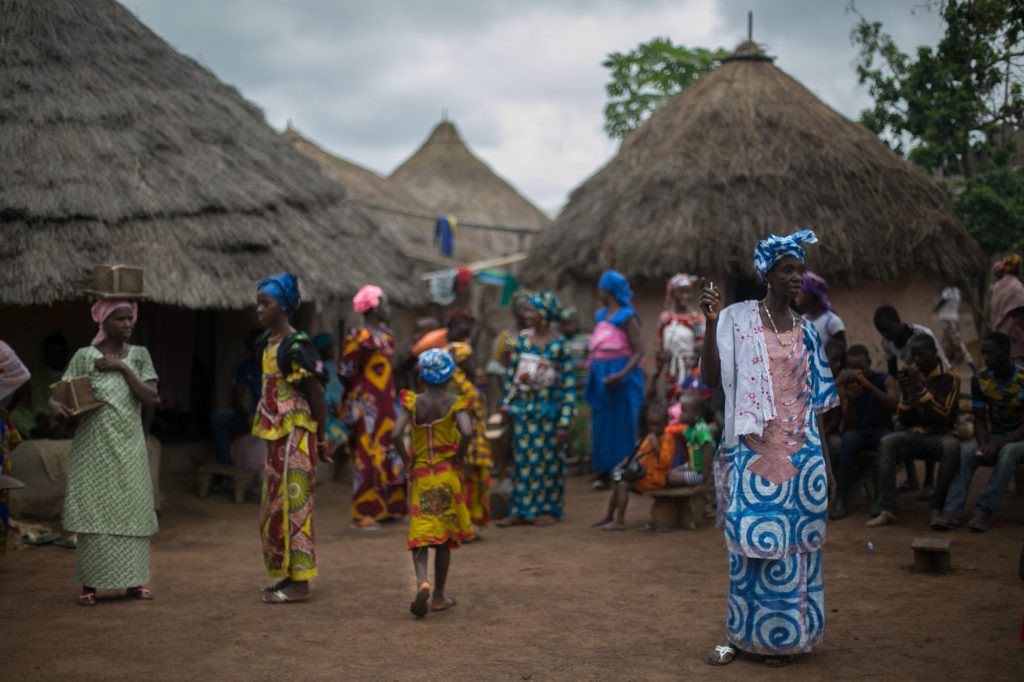 Join the fight against extreme poverty and preventable disease today.