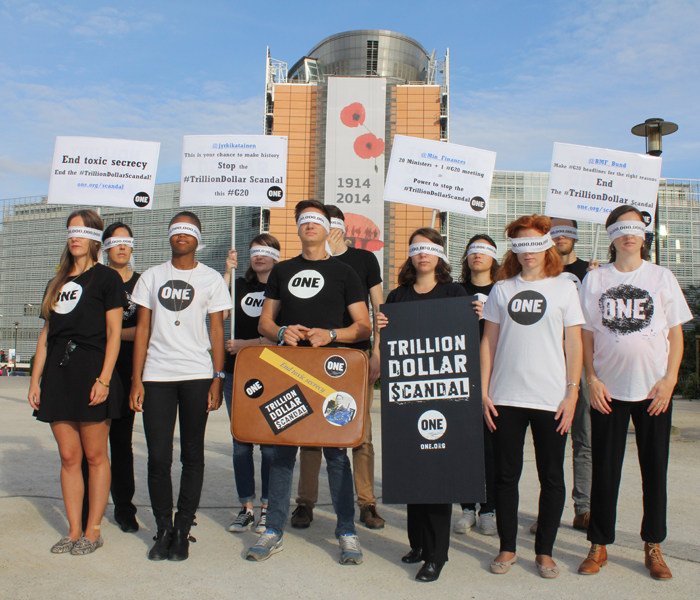 ONE members in Brussels hand over thousands of tweets to Jyrki Katainen, European Commissioner for Economic and Monetary Affairs. Photo: ONE

This weekend Finance Ministers from the world’s largest economies met in Australia to agree steps to increase economic growth and address the challenges of the global economy.

Thousands of ONE members sent tweets and messages in the past few days, asking them to use the meeting to take decisive steps to end the scandal that’s depriving developing countries of a trillion dollars every year.

The ministers had done their homework – bringing a reported total of 700 new policies to the meeting mapped out in individual country action plans. But we have yet to see these plans.

Corruption, money laundering and tax evasion means a trillion dollars are siphoned from developing countries each year – if stacked up the pile would reach a third of the way to the Moon. More significantly – if channelled to the right places, the money raised could save 3.6 million lives every year.

Our members helped us call for four transparency policy measures that would crack down on criminals and help people in countries rich and poor to follow the money and ensure it is flowing to schools and hospitals, rather than Swiss bank accounts.

So here’s the verdict and our marks out of 10 in each area:

We said: Make information public about who owns companies and trusts in order to prevent anonymous shell companies and similar legal structures from being used to launder money and conceal the identity of corrupt and criminal individuals.

They said: We welcome progress so far, and encourage further steps by G20 countries to deliver the St Petersburg commitment to lead by example in meeting the Financial Action Task Force standards on beneficial ownership.

Verdict: This is the status quo and shows limited progress or sense of urgency in addressing this major loophole in the global economy. We heard there would be a set of principles on improving beneficial ownership transparency but we see no mention of them.

We said: Introduce robust mandatory reporting laws for the oil, gas and mining sectors so that countries’ natural resources are not effectively stolen from the people living above them.

Verdict: The US, EU, Norway and Canada have now committed to transparency rules that would put this crucial information in the hands of people and allow them to follow the money. This is an emerging global standard and the G20 should endorse it when they meet in November.

We said: Institute automatic exchange of tax information so that developing countries have the information they need to collect the taxes they are due.

They said: We endorse the finalised global Common Reporting Standard for automatic exchange of tax information on a reciprocal basis which will provide a step-change in our ability to tackle and deter cross-border tax evasion. We will begin exchanging information automatically between each other and with other countries by 2017 or end-2018, subject to the completion of necessary legislative procedures.

Verdict: This is great news, but developing countries risk being left out of the picture if they don’t have the people or IT systems to respond to requests from major countries like the US. The standard should be available to them immediately and support provided to help them reciprocate.

We said: Governments should publish information in line with accepted open data standards so that citizens can follow the money from resources to results and hold their governments accountable for the delivery of essential services.

Verdict: We should be patient as we have heard that some good news might come from the G20 Anti-Corruption Working Group in November.

The G20 series of meetings isn’t over yet, with Finance Ministers set to meet again in a few weeks, and Heads of State gathering for the final summit in Brisbane in November. But if we’re going to end the Trillion Dollar Scandal, the G20’s homework will need a little improvement.

Let Finance Ministers know you want them to do better next time: take action by sending a tweet or message now.