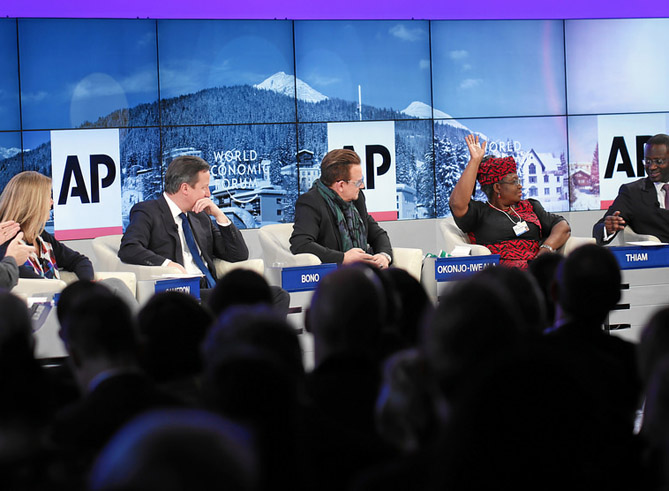 As Bono noted at an event Friday evening high in the Swiss Alps, there were two notes all could hear hanging in the air over Davos. First, the message from Pope Francis demanding that attention be paid to inequality and poverty, how “wealth must serve the people not rule them.”And secondly, Mandela’s imperative legacy that “poverty, like apartheid and slavery is man-made and it can be overcome by the actions of human beings.”

But these two chords don’t make for some vague melody – they compose a call to action, a demand that Davos, and capitalism, do better.

To that end, we tried to amplify their demand and do our part through:

– (RED)’s deal for $10 million with Bank of America, which has brought (RED)’s proceeds to $250 million since its launch in Davos eight years ago, which in turn has helped ONE and partners now secure well over $25 billion from governments for the fight against AIDS, TB and malaria over the last 8 years;

– An activist ambush on the various leaders present, from Chinese to European to American to African leaders, where politely but firmly we made demands on transparency, vaccines, ARVs and other key policy changes to top policymakers. We asked that they “scale the successes” (such as with GAVI and the Global Fund) but also “fix the failures” (such as corruption in the system).

There are now pressing issues to take away and act upon.

The first is what Bono called the “twin evils” of opaque payments in the oil and gas sector, coupled with secretive companies, or phantom firms, which help those few dodgy people in government and corporations hide away their stolen sums and help hide the proceeds of other crimes like gun running, narcotics and human trafficking. If you haven’t, please take action against this now here, as there a crucial vote on the anti money laundering legislation right now.

The second are some ideas Bono floated on the panel with Ngozi and Tidjane on Friday – essentially, creative ideas to help ensure that the future of development is truly owned by the citizens of developing nations. He suggested the idea that teens today born in 2000 be offered the chance in 2015 to own the new goals by naming them; and that musicians in Africa might want to organize the definitive response to Live Aid in 2015 – on its 30th anniversary.