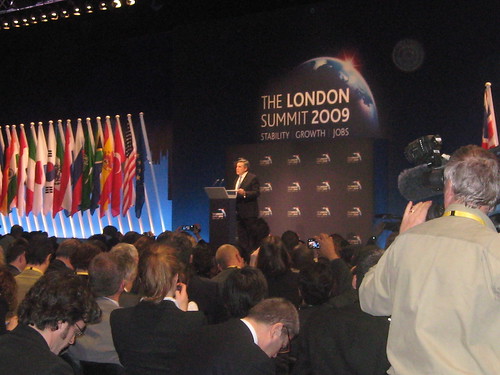 A couple hours ago British Prime Minister Gordon Brown held a global press conference at the London G20 Summit, and right now, US President Barack Obama is holding one as well (which ONE’s Virginia Simmons is currently attending.)

Here are some important excerpts from Brown and Obama’s speeches:

This time of financial crisis is no time to walk away from our commitments to the world’s poorest. So when people are suffering – and, yet, it is within our capacity to help – we will not pass by on the other side. We remain firmly committed to meeting the millennium development goals and all of our pledges on aid. To deal with this crisis we have today asked the IMF to bring forward proposals to use the proceeds of agreed gold sales to support low income countries. So in total we have now reached agreements worth $50 billion for the poorest countries – alongside our support for a world bank vulnerability fund.

Finally, we are protecting those who don’t always have a voice at the G-20, but who have suffered greatly in this crisis. The United States is ready to lead in this endeavor. In the coming days, I will work with Congress to provide $448 million in immediate assistance to vulnerable populations, and to double support for agricultural development to over $1 billion so that we are giving people the tools they need to lift themselves out of poverty. We will also support the United Nations and World Bank as they coordinate the rapid assistance necessary to prevent humanitarian catastrophe. This is not just charity though. These are future markets for all countries, and future drivers of growth.