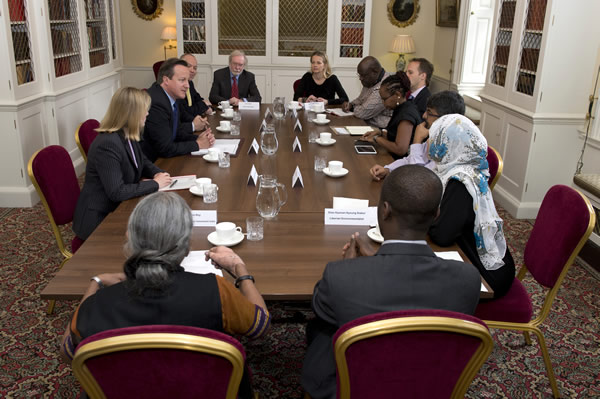 If you’ve been following our coverage of the G8 Summit, which took place in the UK a week and a half ago, you know that the theme for the summit was Trade, Tax and Transparency. And though the official summit was just two days, many other exciting events surrounded it.

If you haven’t yet, read our analysis of the G8 communique, which included commitments to increase transparency of oil, gas and mining payments, to crack down on phantom firms, and to share tax information, as well as opening data.

As the host of the G8, and one of the politicians leading the charge on transparency issues, UK Prime Minister David Cameron gathered partners working in transparency for a Transparency Champions Breakfast, held at 10 Downing Street (the PM’s official residence). The breakfast was attended by the Prime Minister, Justine Greening (the head of the UK’s Department for International Development or DFID) and Michael Anderson, who works at DFID and serves as the PM’s Special Envoy for the UN Development Goals.

This Breakfast of (Transparency) Champions included people who have been at the center of the fight against corruption, trying to improve the efficiency in public services, and using technology and open data to empower citizens and campaigning for freedom of information. There were a few familiar faces around the table. ONE’s European Director Adrian Lovett attended, in addition to three members of our Africa Policy Advisory Board.

John Githongo made an impact fighting corruption from within the Kenyan government, and now, as CEO of Inuka (“get up” in Swahili) Kenya Trust, fights for the rights of Kenyan citizens to hold their government to account. Rakesh Rajani is the current head of Twaweza, which seeks to inform and motivate citizens in Kenya, Tanzania and Uganda to hold their governments to account. Last year, Rakesh penned a great piece comparing development to soccer. Another attendee at the breakfast, Paul Collier, Professor of Economics and Director of the Centre for the Study of African Economies at Oxford University, known for his book “The Bottom Billion”, argued in 2010 for transparency in oil, gas and mining, and that transparency is key to achieving the Millennium Development Goals. One thing these breakfasters all have in common is that they’ve been ahead of the curve when it comes to the campaign for more transparency to fight corruption.

Also at the breakfast was Juliana Rotich, the Executive Director of Ushahidi. Ushahidi revolutionized crisis mapping with crowd sourced data and open platforms – and civil society is finding all kinds of new uses for their very impressive platform. Mabel van Oranje attended from the Open Society Foundations (ONE Board member Mort Halperin serves as OSF’s Senior Advisor), which the same day announced a $10 million Transparency Champions Challenge to empower reformers around the world to improve government responsiveness and accountability.  This money will support the organizations working in transparency, hopefully creating a global constituency for government and corporate transparency.

And great minds must think alike, because the Guardian, two days before the Breakfast of Champions, launched an interactive highlighting the work of 12 voices from the frontline of the fight for transparency. And here again, we are so glad to see friends of ONE called out for the amazing work they are doing.

For example, you might remember Tutu Alicante – the founder of EG Justice – from this interview we conducted last year. Equatorial Guinea is sub-Saharan Africa’s third-largest oil producer, yet due to the repressive regime of President Teodoro Obiang, ordinary citizens receive limited benefits from the country’s natural resources. Alicante pushes for reforms – such as legislation that requires oil and gas companies to publish details of their payments to his government – from Florida, since the government of Equatorial Guinea harasses and even arrests critics that remain inside the country. Even more recently, I had the chance to discuss the importance of open data with Oluseun Onigbinde of BudgIT. BudgIT is a Nigerian organization trying to open up Nigeria’s budget data to the citizens, while at the same time making budget data more accessible with visualizations, tweets and interactives.  These transparency champions all have big plans and determination to make the world a more transparent and accountable place, and we are excited to continue bringing their stories to you.