ONE co-founder Bono made the case that eliminating extreme poverty is possible by 2030 during his speech at the 2013 TED Conference in Long Beach, California, yesterday.

The 2005 TED Prize winner said that transparency, coupled with information technology, is helping to power the fight to the finish – and a new generation of fact-based activists, or “factivists,” could lead the way.  Bono encouraged the audience of changemakers to fight apathy, cynicism and inertia and use evidence and statistics to map our path to the “zero zone.”

Extreme poverty has already been cut in half over the past 20 years – and by 2030, the number of people living in extreme poverty,  those living on less than $1.25 a day, would be virtually zero. If we continue on the current trajectory of progress, we can truly make it possible. 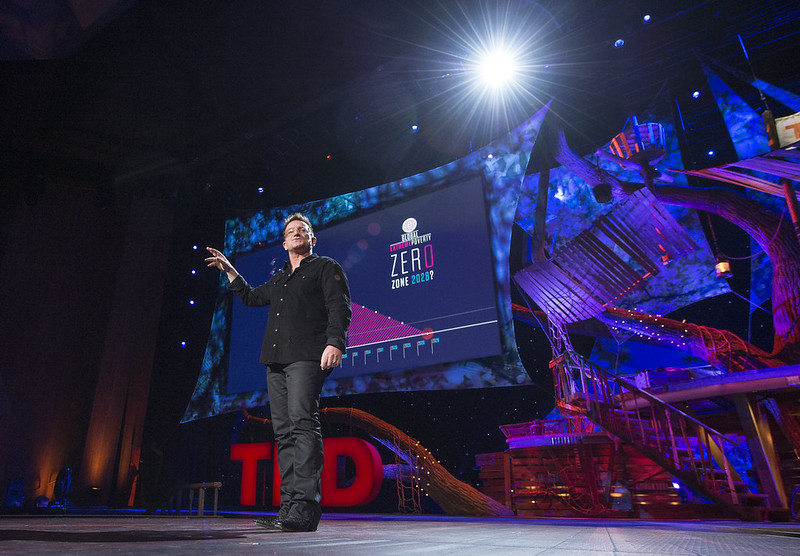 “Why aren’t we jumping up and down about this? And 2028, 2030… that’s around the corner,” said Bono. “That’s only three Rolling Stones farewell tours away. Well, the opportunity is real, but so is the jeopardy. We can’t get this done until we really accept that we can get this done. Look at this graph. It’s called inertia… It’s how we screw it up. This one is really beautiful… it’s called Momentum.”

Bono wrapped up his speech with a call for citizens of the world to join ONE. “We in the ONE campaign would love you to be contagious, spread it, share it, pass it on,” he said. “By doing so, you will join us and countless others in what I truly believe is the greatest adventure ever taken. The ever-demanding journey of equality. Could we answer that clarion call of Nelson Mandela with science, reason, facts and dare I say it, emotion?”

Although his speech won’t be released to the public until later, here are some of our favorite stories and blog posts from Bono’s speech at TED so far:

Where the Kids Have a Name – Charles Kenny, Center for Global Development

TED will release the video from Bono’s talk in the near future. We’ll update you when we know more and can share it with you.