Imagine transitioning from running on a track in sunny Texas to manoeuvring a bobsled in snowy Utah and Canada. That is exactly what sprinters Seun Adigun, Ngozi Onwumere, and Akuoma Omeoga decided to do in order to make their mark in Olympic history.

No Nigerian has ever competed in a Winter Olympic event before. But that will all change as three Nigerian-American women have qualified for the 2018 Winter Olympics in PyeongChang, South Korea.

In 2014, Seun Adigun yearned to return to the Olympic stage after representing Nigeria in the 100m hurdles at the London 2012 Olympic Games. In an interview with Great Day Houston, Adigun said that she decided to try bobsledding after interacting with fellow track-and-field athletes who had transitioned into the sport. Following a year of participating as a brakeman for the U.S. bobsled team, she was inspired to lead the charge in creating a new normal for the continent of Africa. She built her own bobsled out of wood and began to practice the sport in Texas. 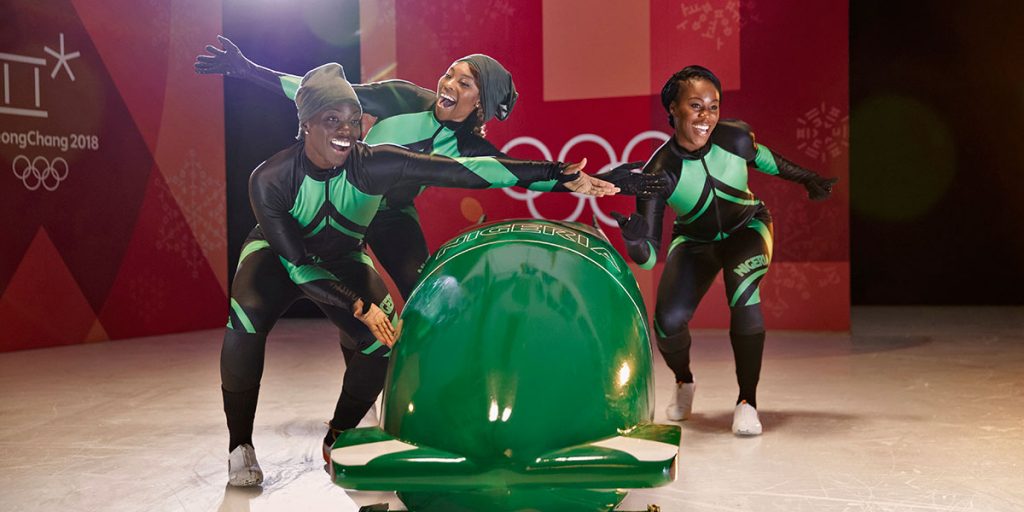 Akuoma Omeoga was introduced to the sport through her college track-and-field coach, who had previously competed with the U.S. bobsled team. Seun Adigun was able to convince Omeoga to join her on the Nigerian team. Similarly, Ngozi Onwumere was a novice to the sport but was persuaded by her peers to participate. On the team, Adigun acts as the driver while Onwumere and Omeoga perform as breakmen.

It’s actually not uncommon for runners to take an interest in bobsledding. According to Medill News Service, the running mechanics necessary for pushing the back of the bobsled allow for sprinters to do well in the sport. And of course, many remember the track-to-sled story of the 1988 Jamaica’s men’s bobsledding team, which inspired the popular Disney film, Cool Runnings.

Fundraising was a key component to the women making it to the Winter Games. Adigun started a GoFundMe in 2016 to help raise money for a bobsled for practice and competition, tools for the sled, ice time, the cost of shipping the sled to different tracks, winter gear, athlete insurance, membership fees, and a host of other necessities. Fortunately, after the team completed their five qualifying races, they secured a sponsorship with Visa.

“We are proud to be part of a team that shares our mission and has connected us with the resources we needed to reach our goal, and hopefully empower others to do the same,” says Adigun.

This awesome story is a testament to the power of hard work and perseverance. Good luck to these amazing athletes!