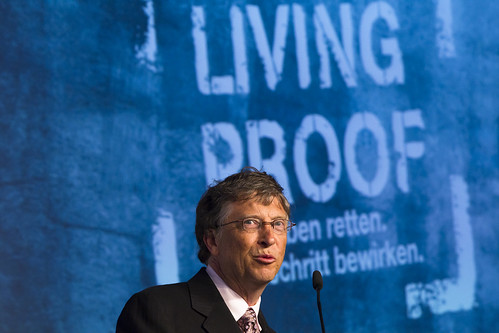 Tomorrow, Bill Gates will address the Development Committee of the European Parliament in Brussels.

Since stepping down from his role as CEO of Microsoft Bill Gates has dedicated himself to the work of the Bill and Melinda Gates Foundation. The Foundation works with ONE in fighting extreme poverty and poor health in developing countries particularly through Living Proof, which Gates will be present in Brussels tomorrow at the European Parliament. “Living Proof” shares stories and facts about the incredible progress being achieved by people in developing countries as a result of smart aid investments.

His address comes at a crucial time – this year the European Parliament and EU member states will decide on the EU’s next 7-year budget. The current proposals foresee 57 billion euros for development cooperation, and ONE will be working hard to ensure that European leaders protect this funding aimed at the poorest countries in the world.

After Bill Gates’ speech, the newly elected president of the European Parliament, Martin Shultz, will make closing remarks. Watch it all live here on the ONE blog tomorrow from 2-3:30pm CET (1-2:30pm GMT/UTC).

Be sure to follow the action and let us know your thoughts using #livingproof on twitter! ONE needs you this year to help secure EU development aid until 2020!