Over 400 children in the Netherlands used their creativity to get behind our #EveryParent campaign for universal access to life-saving vaccinations.

We asked them to draw what having a healthy shot at life meant.  The pictures feature their memories of having vaccinations at health centres, their families and even Minions!

More than 147,000 of you have already signed our petition, and now the campaign is really heating up.  This week, governments and other donors are heading to Berlin to announce just how much they’ll contribute to the work of Gavi, the Vaccine Alliance, for the next five years. This public-private initiative is working hard to get children in poor countries the vaccines they need – and with success!  Over the past 15 years, Gavi has been able to vaccinate 440 million children and save more than six million lives.

If world leaders all chip in enough new funding, Gavi can continue its excellent work and  vaccinate another 300 million children over the next five years.  This would save a staggering five to six million extra lives. 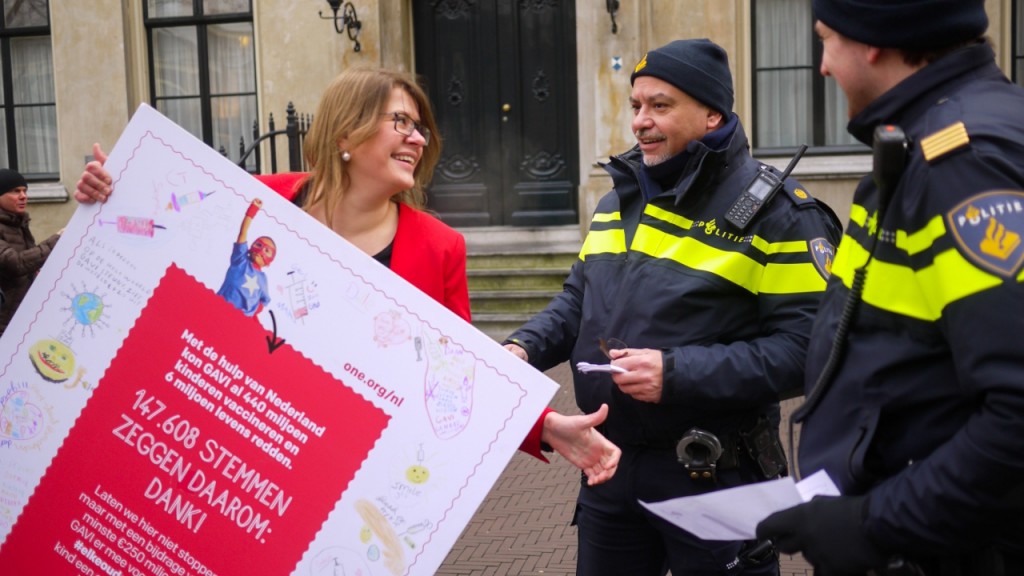 Youth Ambassador Elvira telling two very kind policemen of the importance of Gavi, the vaccine alliance, in The Hague, Netherlands. Photo: ONE

Our Dutch Youth Ambassadors took these drawings to the streets in The Hague and handed them out to thank passers-by, Members of Parliament and of the government for the contributions the Netherlands has made in the past. But like all the other countries who have given generous support before, we want them to keep up the good work and make ambitious pledges this week in Berlin.

1 in 5 children still don’t have access to vaccines that could save their life. There is still time to add your voice to the campaign by signing our petition.

If you are in the Netherlands, you can join these children and add your own colour to the campaign.