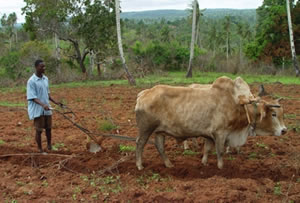 In Kenya, the tiny tsetse fly is a big problem.  Its bite can transmit sleeping sickness to humans as well as the fatal animal disease Nagana to cattle.  The economic impact can be devastating.  But thanks to an EU-funded trial, farmers in Kenya are fighting back with a revolutionary repellent collar.

The new must-have accessory for Kenyan cows that contributes to improve the welfare, food security and general prosperity of poor livestock keepers in Africa was developed by scientists at the International Center for Insect Physiology and Ecology (ICIPE). The repellents have been identified from odors of animals avoided by tsetse. The 2 million EU-funded project runs until June 2013.

Project Coordinator Dr Rajinder Saini says the project has reduced the incidence of the disease in the trial area by more than 90%.  The vast majority of participating farmers report that they can now graze their animals anywhere, including in tsetse-infested areas. 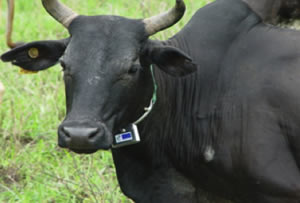 As a result, the body weight of the protected animals has increased significantly, resulting in higher selling prices.  Milk production has also increased.

The economic effect is marked.  “Before ICIPE came with the collars, the selling price [of cattle] was about €91- 110 per head. With the collars and subsequent weight increase, we can now sell animals above €322,” says Sabina Tsehlo, one of the project’s beneficiaries from Mkongani on Kenya’s coast.

“Before the collars were introduced I got 1.5 litres of milk per day, now I get 3 litres. With collars, we can now introduce high-grade animals,” adds Mary Ben Nzazi from Mangawani.

Suleiman Shee, also from Mangawani, observes: “With the collars, I can graze my cows in the early morning and late evening without disturbance from the flies, which are most active at these times. The weight of my animals is also increasing and we can get more money by selling them.” 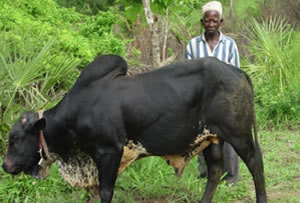 In Zunguluka, farmers are also seeing the benefits from the EU’s anti-tsetse fly project.

“Before the ICIPE repellent collars, I used to pay about €275 to plough my 20 acres of land. Now I use my protected bulls and pay nothing,” Mohammed Sheria says proudly.

The development of the tsetse repellent technology could make a significant contribution to improving food security in Africa.

“Improvement of health and productivity of livestock can remove these farmers from the poverty trap,” says Dr Saini.

Following the successful results of the project to date, Dr Saini and his team hope to further optimize the collar and scale up the project so that more farmers in Kenya and other countries affected by tsetse flies can access the technology.  They aim to turn the prototype collars being trialled in Kenya into mass-produced products which are non-metallic, cheap and easy to use by livestock keepers. Moreover, ICIPE also wants to evaluate whether the collars could also be used to protect humans.

The International Centre of Insect Physiology and Ecology (ICIPE) is an international scientific research institute headquartered in Nairobi, Kenya. ICIPE’s mission is to help alleviate poverty, ensure food security and improve the overall health status of peoples in the tropics by developing and extending management tools and strategies for harmful and useful arthropods, while preserving the natural resource base through research and capacity building. For more information about ICIPE, visit: http://www.icipe.org