By Melissa Catelli. A version of this post was originally published by Take Part.

For most travellers, a Kenyan safari involves days of patiently waiting for a glimpse of lions, elephants, or an elusive leopard hiding in the bush. For native New Yorker Paige Elenson, a 2006 family safari yielded a far less conventional sighting: a group of young Kenyan acrobats doing handstands in the middle of the bush.

“As a yoga teacher, my first reaction was to jump out of the vehicle and do handstands with [them],” Elenson says—so she did, leaving the safari group behind.

It was a brief encounter, but Elenson’s skills—honed over 15 years—impressed them. Shortly after returning home, she got an email from the acrobats, members of the Sarakasi Trust, asking her to come back and teach them yoga. At first, Elenson, a full-time yoga teacher, declined their requests, sending them yoga books and DVDs instead. But their persistence paid off. 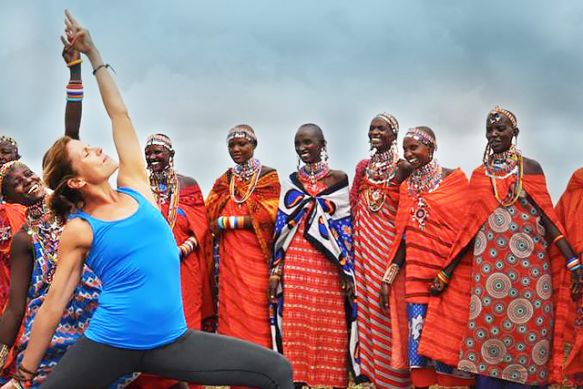 Elenson returned and started volunteering in some informal settlement communities and was asked to teach a class at a private gym. At the time, the city was home to just five yoga teachers and the health and wellness industry in Kenya was only accessible to a small number of wealthy individuals. On average, a single yoga class cost each participant 500 Kenyan shillings, or approximately $5.50.

So Elenson came up with an idea: Why not create a way to train unemployed youths from marginalised communities and help them earn money teaching yoga?

That year, she founded the Africa Yoga Project (AYP). The program provides a scholarship-based, 200-hour teacher training course to residents ages 18 to 35 from slums and informal settlements across Kenya; the goal is to help the teachers spread health and well-being throughout their communities while also providing them with a stable income. To qualify for the program, Elenson requires that applicants be African nationals, demonstrate financial need, and be “committed to becoming a yoga teacher and serving communities.”

Participants who have completed all of their requirements are provided health benefits and a stipend of roughly $100 per month over the course of three years to teach five weekly outreach classes free of charge in their communities. Teachers are required to open a bank account in order to receive their monthly stipend, encouraging long-term financial responsibility as well.

The weekly community outreach classes take place in various locations, including schools and acrobat training camps, but also areas of need such as orphanages, HIV centres, and prisons. More than 200 local AYP-trained instructors teach approximately 300 classes and reach 6,000 people each week in Kenya.

Eason says most of the current teachers were unemployed prior to working with Africa Yoga Project and were living in some of Kenya’s poorest slums. “For many of them, their way of making a living [was] through pickpocketing or theft,” she says. 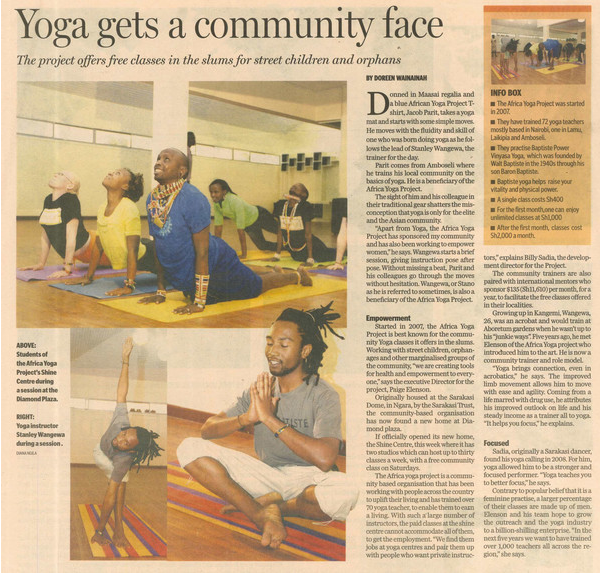 Nairobi local Eliam Wanji, 27, had never heard of yoga until her sisters started practising with AYP. Prior to AYP, she held a variety of different casual jobs, from beading to garbage collection, but her income was never consistent. 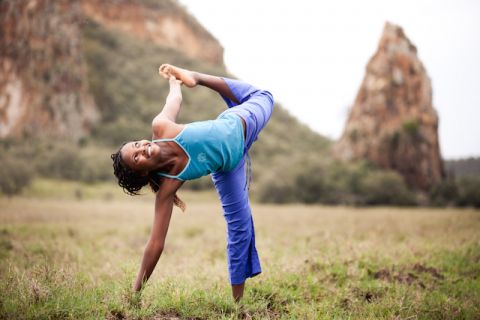 Nairobi local Eliam Wanji, in half moon pose, has been teaching yoga through AYP for the past five years. (Photo credit: Africa Yoga Project)

“The most I made one time was 7,500 shillings [equivalent to $82], and I felt like I was the richest person on earth,” she says. “There is no way I can compare AYP and former jobs. It’s like comparing death and sleep.” Today, four members of Wanji’s family are teaching yoga, and she’s been with the organisation for five years.

For Wanji, the most challenging and rewarding part of her training with AYP was learning about forgiveness and building trust. “It’s hard to go back and teach the same communities we may have stolen from. We were asked to call people that we needed to forgive and also ask for forgiveness,” she says. “I am the better for it, as it helped set me free [so] I could move on with my life.”

Eight years in, Elenson says she’s most proud of how the program has helped participants enter Kenya’s middle class while serving their communities and doing something they enjoy. “Some AYP teachers have moved from living in what they referred to as slums to new homes, starting families, supporting family members with school fees, and working on new income generating projects,” she says.