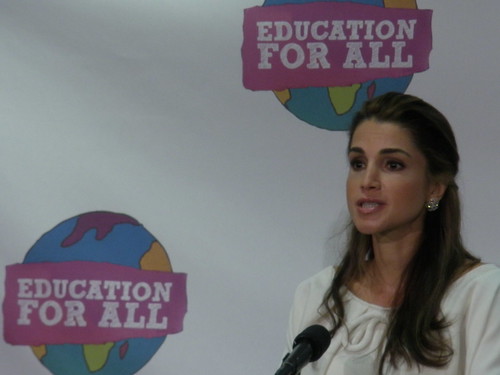 On Monday, the Global Campaign for Education (GCE) launched its annual Global Action Week, seven days of advocacy to raise awareness around education and encourage governments to follow through on their commitments to put 75 million children in school by 2015.

Here in Washington, GCE kicked off the week with a roundtable discussion on the state of global education and the potential for a new U.S. investment. The guest of honor was Queen Rania of Jordan, a longtime advocate for education in her home country and around the world. Queen Rania began the conversation with a timely topic: economic growth. Education, she pointed out, is central to fueling national economies and raising incomes at the family level. And as a critical input into health, gender empowerment and democracy, education is one of the highest-yield investments we can make into families and communities, especially in the world’s poorest countries. With the global financial crisis in full swing and threatening to hit poorest countries the hardest, the time is riper than ever for a bold new initiative to get every child in school.

Queen Rania was backed up by three powerful education advocates here in the U.S.: Congressional champion Representative Nita Lowey and two experts who are now serving in the Administration – Gene Sperling (who is Council to the Secretary of the Treasury) and Gayle Smith (Senior Director for Relief, Stabilization and Development and Senior Advisor to the President on the National Security Council).

Rep. Lowey spoke first, saying that the “stars are aligned” for achieving the education for all. She noted that U.S. funding for basic education has increased seven-fold since 2001 (thanks largely to her leadership on the House Appropriations Committee), an impressive scale-up but still a far cry from the U.S.’s fair share of the $11 billion price tag for meeting the Education for All goals. Rep. Lowey pointed out that strong congressional leadership is now paired with clear support from the Administration, a reference to President Obama’s commitment to contribute $2 billion to a Global Education Fund. As a result, she said, the constituency for global education has never been stronger. Gayle Smith also spoke on President Obama’s commitment to education, saying that the President remains committed to his campaign promise and that she was hopeful that “in the not-too-distant future,” he will make an announcement on the establishment of a robust, sustainable Global Fund for Education.

This discussion couldn’t have been more timely- details on President’s Obama’s budget request will be coming out in the next couple weeks. ONE and other advocates are hoping that they contain a strong boost for global education spending to indicate the Administration’s intent to fulfill its commitment to a Global Fund for Education. An investment in education by the U.S. in FY10 will ensure that any initiative in the “not-too-distant future” will have the resources it needs to be successful. 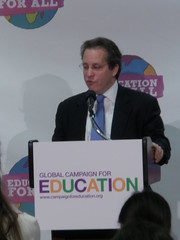 Gene Sperling (former head of the Center for Universal Education) ended the panel by outlining a few trade-offs that global policy makers cannot afford to make when it comes to education- access vs. quality, donor funding through bilateral vs. multilateral channels, and a focus on primary education (5 years) vs. eight years of basic education. He also said it was time for global leaders to step up their efforts to supporting education in countries in conflict and transition, noting that just as a dollar invested in girls’ education is one of the best-spent dollars in the world, so is a dollar invested in education for children of conflict.

To drive this point home, Sperling quoted a passage from What is the What by Dave Eggers, one of my favorite books. The scene takes place in a school in a refugee camp in the midst of the Sudanese civil war. A group of boys are writing lessons in the dirt. Their teacher looks over their work and attempts to convey to them the magnitude of what they’re doing, saying:

Stay tuned here on the ONE blog for other things going on around the Global Action Week and how you can get involved.