Our guest bloggers today are Blair Glencorse, Executive Director of the Accountability Lab and Nora Rahimian, an organiser who uses the power of music to effect change. 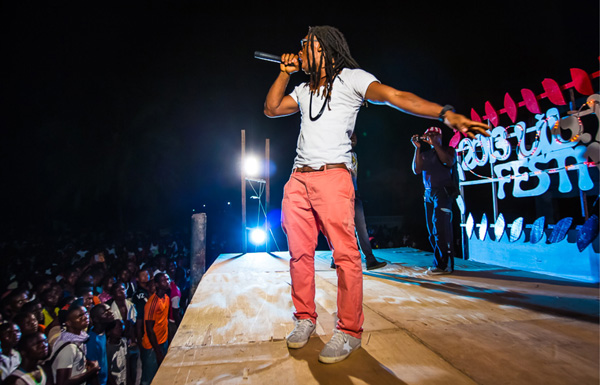 “If we don’t speak up against the ills in society, who will?” asks Takun J, Liberia’s Hip Co King, in front of thousands of screaming fans at a concert in Monrovia. He then launches into “Police Man” a song about police corruption, which several years ago had the artist arrested and beaten by the authorities.

Hip Co – which emerged in the 1980s – blends hip hop with Liberian English.  Born in the streets, the music has always been inherently political, making it especially popular with young people who can relate to both its catchy beats and African rhythms and its messages of struggle and change. The annual Hip Co Festival recently attracted over 20,000 Liberians for two days of concerts in different parts of Monrovia; and artists like Takun J and Nasseman are national celebrities within the growing music industry.

“The people, they listen to us.  And we, as musicians, we have a responsibility to talk about these things, the corruption, rape, poverty… all the things that are wrong in our country.  So we knew we had to come together to strengthen our voice and make ourselves heard, to better impact our society,” Takun J explained.

Listen to one of the Networks tracks.

The Lab is supporting creative, low-cost tools to make decision-makers more responsible and build accountability in Libera, with an emphasis on concrete actions and movement away from tired, expensive, aid driven approaches.

Many of these artists already have a history of working on accountability issues.  Many have written songs against corruption and have been vocal about the changes they’d like to see in their country.  Rather than replicating their work, the Network is working on the core accountability issues that impact the music industry the artists are part of. These include strengthening and enforcing copyright laws to protect their music, establishing minimum play laws to ensure local music does not get overlooked, and mobilising artists to create effective mechanisms to represent their interests.

Events like the Hip Co Festival help establish an infrastructure for the growing music industry while also giving artists a platform to spread their message.  In addition to radio and television appearances and, increasingly, social media, concerts are the main mode of communication between hip co artist and their fans.

The Lab has been helping the artists to think about and discuss experiences from other countries that might be relevant, such as the Y’En A Marre movement in Senegal’s music industry. The network now meets weekly to discuss the issues, strategise and plan next steps.

There is a long way to go, but the network has created a real sense of positive movement. As Pochano points out “We can’t wait for the government to do everything. We have a voice and we need to lead change in our society.”

Listen to more of the Hip Co Accountability Network’s music on their Soundcloud page; and see photos on the Lab’s Facebook page. Follow Blair at @accountlab and Nora at @norarahimian.