On Friday 15th May, ONE members and staff returned to the same spot where Bono launched ONE in Philadelphia, 10 years earlier.

ONE’s US executive director Tom Hart remembers with fondness how ONE started.

We gathered in Philadelphia, on the East Coast of the United States, with Bono, Michael W. Smith, David Beckman, Dikembe Mutumbo, and a host of others to launch what we hoped would be the next big movement: making poverty history. 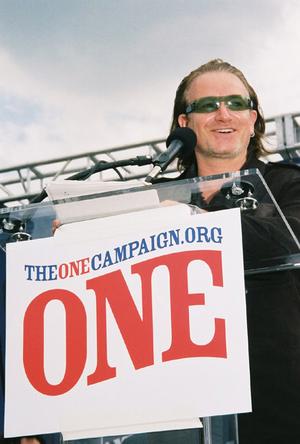 Bono launches The ONE Campaign in Philadelphia in 2004.

While much work remains to be done, I can tell you that we’ve made incredible progress in the last ten years.

Since ONE and other activists started campaigning against the AIDS emergency, the number of people receiving life-saving AIDS treatment globally has skyrocketed to 9.7 million, up from just 300,000 in 2002. There are 51 million more kids in school, and the global poverty rate today is half of what it was in 1990.

That’s extraordinary progress – and we couldn’t have done it without ONE members like you.

That’s why last week, my staff and I made the trip back to Philadelphia to commemorate just how far we’ve come.

Right in front of Independence Hall and the Liberty Bell, we met with more than two dozen volunteers – some of whom have been with ONE from the start – to talk about the progress we’ve made and what we can achieve going forward.

It was really inspiring to hear our volunteers explain why they do what they do. I met people from all walks of life – all were united by their desire to help people live healthier, more productive lives and put an end to extreme poverty once and for all by 2030.

That’s something we set in motion ten years ago – and I couldn’t be more proud of how far we’ve come.

One thing that hasn’t changed since 2004: we’re still asking for your voice. Join ONE.