Global delegates at the first High-Level Meeting of the Global Partnership for Effective Development Co-operation in Mexico. Photo: GDEPC

This first high-level gathering of the Global Partnership was a critical opportunity to increase transparency in developing countries and of development cooperation, and give people in these countries the information they need to hold their governments accountable and improve their lives.

Explicitly supporting the data revolution in the Mexico Meeting Communiqué, the Global Partnership made a number of promising transparency commitments. We now expect GPEDC members to turn these words into action.

Openness and transparency are fundamental prerequisites for effective development. Improved transparency will shine a light on what resources are available for investing in development, how they are spent, and the results that are achieved.  This will help ensure resources are invested effectively for development – in lifesaving health services, growth-boosting agriculture, quality education, and improved infrastructure.

In Mexico, developed countries renewed their commitment to publish information on their development efforts, in accordance with the International Aid Transparency Initiative (IATI) by 2015 – a voluntary initiative to make information about aid spending easier to access, use and understand. Donors also promised to improve the quality and usability of this data. Southern providers of development assistance like Brazil and China made a first step by committing to share more information about their activities in other developing countries.

In addition, the Global Partnership made transparency commitments to help countries retain their resources to use for development and stop the illegal flow of funds out of developing countries. The Mexico Meeting Communiqué committed to supporting the strengthening of taxation systems and to combating corruption, money laundering, and illicit financial flows. The importance of extractive industries governance for domestic resource mobilisation was also recognised.

Some Mexico participants decided to be even more ambitious.  A number of “voluntary initiatives” aimed at increasing transparency were launched in Mexico. For example, CIVICUS, a global civil society alliance, launched The Big Development DataShift, a multi-stakeholder initiative to build the capacity of civil society around the world to collect, curate and use citizen-generated data.

Another initiative to further accelerate efforts on IATI was initiated. The Open Government Partnership (OGP) – an international platform committed to making governments more open and accountable – also launched an initiative encouraging all Busan endorsers to join OGP in 2014. 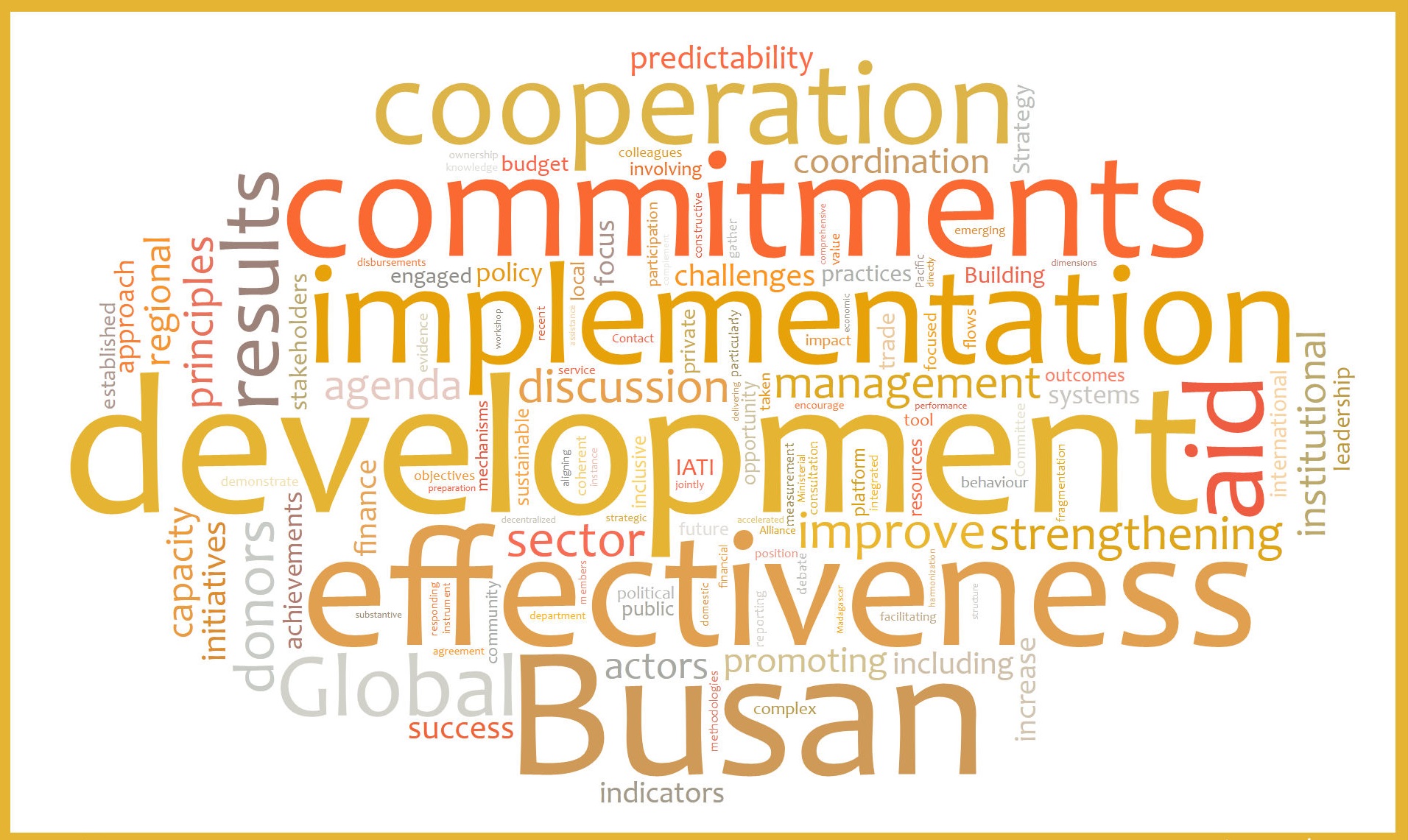 A graphic showing popular words used in e-discussions held in the run-up to the Mexico event. Source: http://www.worldwewant2015.org/

It is now time to turn these commitments and promising initiatives into reality.

Donors had already promised in Busan in 2011 to report all their development activities to IATI by 2015. Some of them have made good progress. For instance, the UK’s Department for International Development (DFID) has been leading by example. However the vast majority of donors are currently off-track to meet their Busan promise by 2015. It is urgent that development providers continue to strengthen the transparency of their assistance and meet their commitment to publish to IATI by 2015.

GPEDC members should also implement legislation requiring information about who owns and controls companies and trusts to be made public.  Phantom firms play a central role in laundering funds, concealing the identity of corrupt individuals and irresponsible businesses. This robs governments in developing countries of resources that might otherwise be invested in development.

Natural resources such as oil and gas represent a source of vast potential wealth for poor countries. If other countries followed the lead of the United States, the European Union and Canada and committed to requiring companies to publish what they pay to governments of countries where they operate, this information could be used by citizens to hold their governments accountable for the effective use of those funds.

GPEDC members should also make the case for greater tax transparency, including through a system for the automatic exchange of tax information that works for and includes developing countries.

2014 is a year full of opportunities, including the G20 summit in Australia in November, the OGP European conference hosted by Ireland in early May and the post-2015 discussions, for signatories of the Mexico Communiqué to champion transparency and take action to ensure their commitments actually lead to smarter aid and more effective development.

Mexico – as new co-chair of the GPEDC, co-chair of OGP, as well as a key player in the G20 and the post-2015 discussions – could play an important role in championing the transparency promises made in Mexico City.