The Fourth High Level Forum on Aid Effectiveness isn’t even finished yet but we can already log big wins for transparent and accountable aid. In US Secretary Clinton’s keynote address at the forum in South Korea, she officially announced that the United States would be signing the International Aid Transparency Initiative (IATI), something that ONE has been pushing hard on in advance of Busan. As ONE’s US Executive Director, Sheila Nix said:

“Secretary Clinton’s announcement that the United States will join the International Aid Transparency Initiative (IATI) reinforces America’s leadership in making foreign assistance more transparent and accountable. Being open and clear about how the U.S. is spending foreign aid—where and on what—will help make aid more efficient and accountable to US taxpayers and will maximize resources to help those living on less than $1.25 lift themselves out of poverty.”

The US announcement followed on from another big announcement by Canada on Monday that they would also be joining IATI. The addition of these two major donors will bring the total number of IATI signatories to 26 and increase IATI’s coverage of aid to over 75% of global ODA flows.

This is great news for ONE members who supported the Make Aid Transparent campaign. On Wednesday at the forum the Executive Director of Publish What You Fund (PWYF), Karin Christiansen, presented the Make Aid Transparent petition during a high-level panel on transparency and accountability. 63,905 people signed the petition from over 180 countries, underscoring global public support for aid transparency. 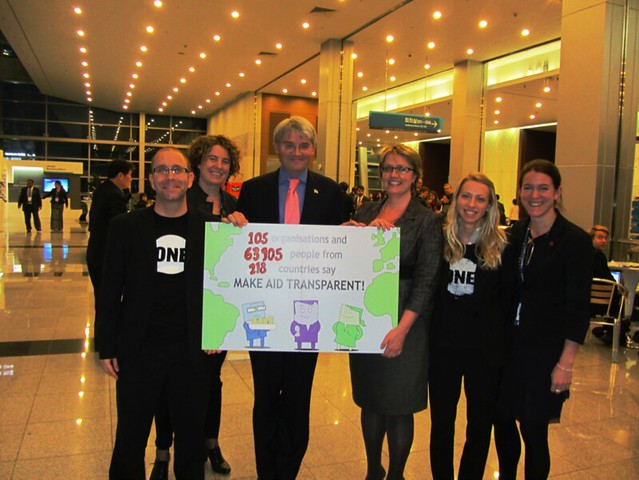 ONE’s Alan Hudson and Sara Messer present the Make Aid Transparent petition to UK Secretary of State for International Development Andrew Mitchell, along with Karin Christiansen of PWYF and partners.

But more and better information is useless if people can’t access or understand it to make aid more efficient and hold governments to account. In order to improve accessibility and make aid info more user-friendly, the Open Aid Partnership was officially launched during the High Level Forum. The Open Aid Partnership is an initiative started by the World Bank Institute and other partner countries to provide visual mappings of aid projects, allowing for better donor coordination and targeting of aid. It also provides the technology for citizens to give feedback on development projects through mobile texting and online submissions, allowing for real-time monitoring and accountability! ONE supports the Open Aid Partnership and calls on more countries to sign up and provide their aid data. For donors that are already signatory to IATI, this is the next step to put transparency into action and turn aid information into development results.