Our guest bloggers today are Elisabetta Colombo and Chiara Gonzi, ONE Youth Ambassadors from Italy. 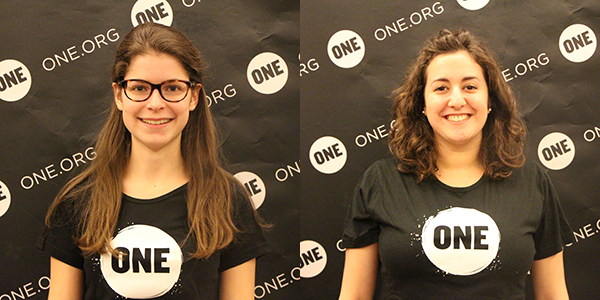 On International Women’s Day, ONE launched the Poverty is Sexist campaign, to ask world leaders to put women and girls at the centre of the fight against extreme poverty.

In Italy, Youth Ambassadors were on hand to help spread the word. We organised a series of events that took place all over our beautiful country. The new campaign was presented in many different ways that allowed us to reach loads of new friends – and some old ones too!

It all started on Friday, March 6 in Treviso where we we gave ONE members, friends and family a preview of what’s coming up this year. Then on Saturday night, we hosted three simultaneous “apertivONEs” in Milan, Rome and Trento.

What’s an aperitivONE? In Italian we add “one” to the end of a word to describe something that’s bigger and better than usual… So in this case, aperitivo + ONE is kind of like big happy hour! We sparked loads of interest and people were really keen to hear about the campaign and find out how they can stand with girls and women across the world. 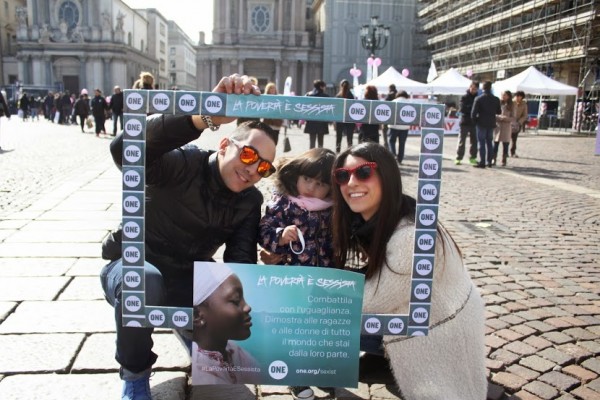 Supporters of the campaign in Turin.

On Sunday, Youth Ambassadors went to the “Just The Woman I Am” festival in Turin where 10,000 people – including 25 ONE members in bright pink ONE t-shirts – took part in a 6km run organised by the University of Turin. We spoke to loads of people who’d come down to soak up the atmosphere: mums and dads, sons, daughters, grandparents – everybody was interested in the issue. We even got interviewed on the radio!

And last but by no means least, Youth Ambassador Karen also spoke about our new campaign at a photo exhibition on women in Parma.

Phew! Over the course of the weekend Youth Ambassadors across Italy met hundreds of people and collected hundreds of signatures for our petition calling for world leaders to recognise the full potential of girls and women all over the world.

Rossella, a Youth Ambassador from Trento said:
“It was a pleasure to find a real and authentic enthusiasm for gender equality and our fight against extreme poverty.”

Chiara, a Youth Ambassador from Milan said:
“Everyone says Italy is not a country for young people, but what we’ve seen this weekend is a generation that really wants to be part of the change. The new campaign ‘Poverty Is Sexist’ got a great response from the people we met. It was really a great weekend!”

But this doesn’t end here. We’ll be helping ONE spread the message that poverty is sexist throughout this important year – from G7 leaders at Schloss Elmau, to world leaders at the Financing for Development conference, and right up until the new global goals are released in September. The fight for equality is on! In developing countries, girls and women are breaking down barriers and achieving extraordinary things. Our voice can help them win the fight faster.

If you haven’t already, we urge you to sign the petition and show every girl and woman, no matter where they live, you’re on their side.