On Tuesday, the OECD Development Assistance Committee (DAC) released the preliminary official development assistance (ODA) figures for 2016. These aid statistics are not as detailed as the final statistics that come out in December, but they give the first view of how much aid donors gave the prior year. ONE has used our own methodology to analyse the figures to get a fuller picture of donor performance. Here are the top three things you should know:

Total ODA from DAC countries reached an all-time high of $140.1 billion in 2016 (current prices), a 7.4% increase from 2015 in real terms. This represented 0.31% of countries’ national income on average, up from 0.30% in 2015. Even excluding in-donor refugee costs (which we cover below), there was still a 5% increase in ODA. This is a welcome increase, but the global needs for development and humanitarian aid are much higher. 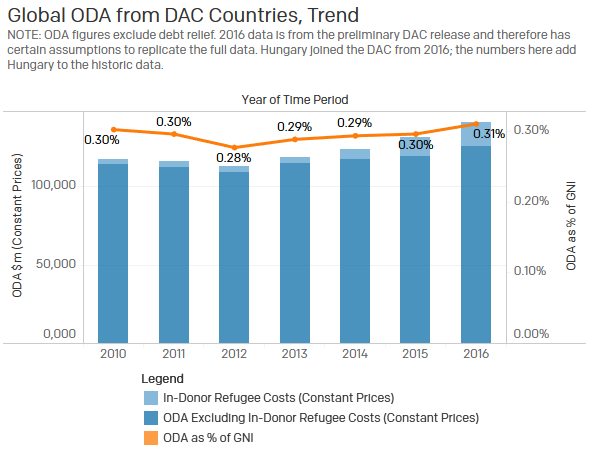 ‘In-donor refugee costs’ are also up

The amount donors spend at home supporting refugees has been growing over the past couple of years with the continuing refugee crisis, as we reported in last year’s DATA Report. According to the rules, this money can be reported as ODA in the first year. It is absolutely right that countries should fully support refugees seeking shelter and safety in their countries, but as this money is not going to fight poverty in developing countries, we believe it should not count as aid. 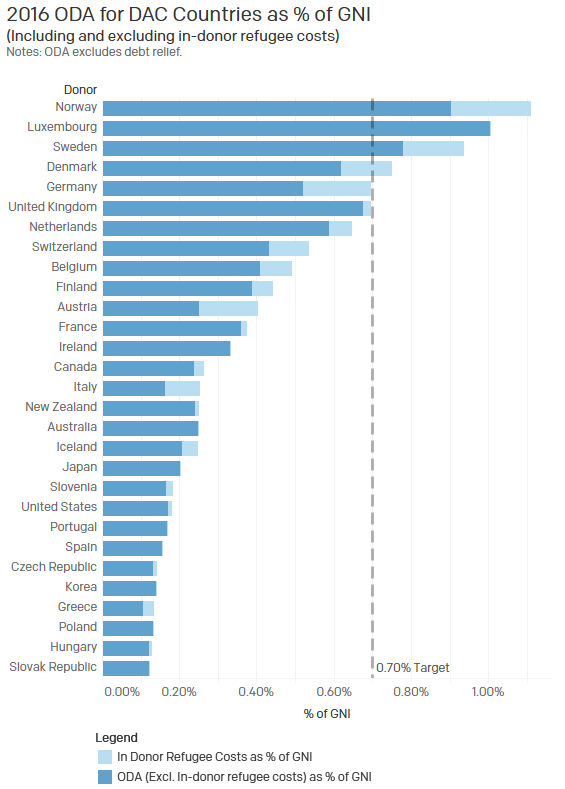 The proportion of aid going to the poorest countries is down

While total ODA is growing, the share of aid that donors are sending to the poorest countries – the least developed countries (LDCs) is dropping. LDCs have some of the highest and deepest levels of extreme poverty, and the fewest resources to devote to meeting basic needs. In order to end extreme poverty worldwide, it is critical that donors are focusing aid on the poorest. Indeed donors have committed to reversing the declining trend of aid going to the least developed countries. Yet bilateral aid to LDCs (excluding debt relief) fell by $1.0 billion (-4.1%) in real terms in 2016. And the overall proportion of aid to these countries is in decline for the third year in a row. 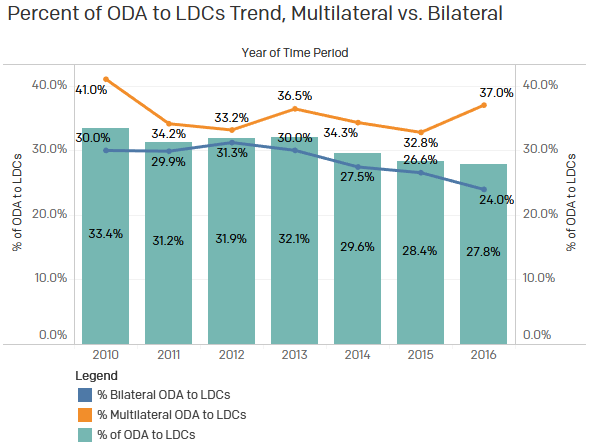 Note: ONE’s methodology excludes bilateral debt relief. LDC imputed multilateral flows in 2016 are estimated by ONE. Germany did not report bilateral aid to LDCs in 2016 so this is estimated to be unchanged from 2015 (in real terms). Hungary joined the DAC in 2016, and we have added Hungary to the 2015 DAC figures for year-on-year comparisons.