Toronto mayor Rob Ford has dominated the news of late, but here’s a positive development in Canada that you likely didn’t know about: The Canadian government is positioning itself to be a global leader in transparency, a move that could have a significant impact in the effort to end global poverty.

You see, back in June, Canadian Prime Minister Stephen Harper publicly committed his government to putting in place mandatory disclosure rules that will require oil, gas and mining companies to publicly disclose the payments they make to foreign governments for the extraction of natural resources.

This is a big deal, because secrecy around those payments can – and does – facilitate corruption, enabling corrupt government officials and irresponsible businesses to siphon off money that should be spent to improve things like health and education.

A similar law was passed in the European Union in June of this year, meaning that companies in the EU’s 28 member states will soon begin disclosing this information. The US passed a comparable law in 2010, but a shameless effort by some oil companies intent on preserving the secrecy of the status quo has temporarily derailed its implementation.

ONE, in collaboration with partners like the Canadian chapters of Publish What You Pay (PWYP) and Engineers Without Borders (EWB), is encouraging Prime Minister Harper’s government to draft strong rules that will require oil, gas, and mining companies to disclose detailed payments that provide the citizens of Africa and elsewhere with information that they can use to hold their governments more accountable for the use of those funds.

We are excited about EWB’s just-launched TRACE Campaign (TRansparent and ACcountable Extractives), which calls on provincial governments to take the lead in making the oil, gas and mining industries more responsible. Persuading the provincial governments, which is where mandatory rules will most likely need to be implemented – is critical, and EWB has some exciting ideas in the pipeline that will make it easy for ONE’s members in Canada to take action.

Take action with the TRACE Campaign

Mining, oil & gas must get more transparent. Canada can take the lead. Add your voice to the call! http://goo.gl/nSYcL0 #traceit @ewb

[email protected] and @PwypCanada are pushing Canada to make its extractive sector more transparent! Find out how http://bit.ly/HZzxy2 #traceit

I’m a part of the global extractive system. So are you. So is Canada. We have an opportunity and responsibility to make the mining, oil and gas industries more responsible. Add your voice to the call! #traceit http://www.responsiblemining.ewb.ca/

Engineers Without Borders Canada has launched the TRACE Campaign for Transparent & Accountable Extractives. Through December 6, Canadians from coast-to-coast will call on their provincial governments to make the extractive industry more responsible. Add your voice to the call! #traceit http://www.responsiblemining.ewb.ca/

EWB is planning a Social Media Blitz on December 5 and 6 (the final two days its campaign), targeted at provincial Ministers of Finance, Ministers of Natural Resources and Premiers. In preparation for this Blitz, you can get creative and generate content that will be directed at these influential targets. Here’s how: 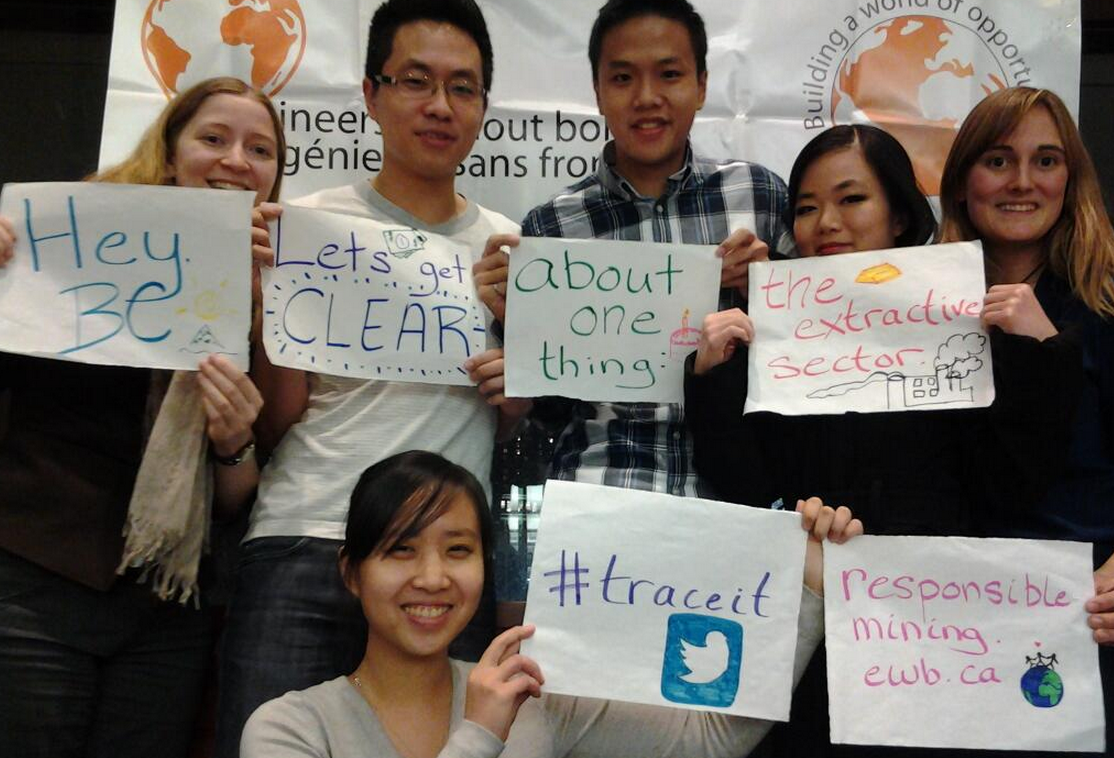 This [insert your role/job/passion!] from [city/province/country] wants Canada to make mining, oil and gas more transparent.

On December 5 and 6 – the last two days of the campaign – EWB will publish all of your submissions  on the TRACE Campaign website, and then call on its members (and you!) to help increase the collective impact by sharing your creations (and re-sharing those of others).