Let’s put aside the political spin and find out what the world leaders accomplished (or more accurately, failed to accomplish) at the G7.

“In the face of a once in a generation pandemic that’s raging across the world, this G7 will collectively be remembered in just one word: underwhelming.” These are the words of ONE’s Acting CEO Tom Hart following yet another Summit that did not live up to the moment.

The world is in a global crisis, and yet our leaders are failing to coordinate a global action plan. Prime Minister Justin Trudeau famously declared “Canada is back” when he was first elected, but each G7 continues to leave that promise unfulfilled. Canada consistently says the right thing on the global stage, but when it comes to following up those promises with action, we fall short of our fair share and our potential to show concrete leadership.

So, let’s cut through all the political spin, and see what happened at Carbis Bay.

UK Prime Minister Boris Johnson was hoping to get countries to share 1 billion Covid-19 vaccine doses to developing countries within the next year.

Right away, we could easily see two problems with this goal.

First, keep in mind that G7 and EU countries could have over 2.7 billion excess doses even after fully vaccinating 100% of their population. Sharing just 1 billion doses while hoarding and pre-purchasing all the doses they can find is a clear indication that these leaders were more interested in domestic politics than following the science-based global action plan.

Second, when it came to the math, it looked like countries were being allowed to recycle previous announcements and investments. For example, if a country previously invested in the global vaccine distribution initiative COVAX, they were “allowed” to double count those financial investments and claim the equivalent amount as “doses shared” at the Summit – without actually sharing that number of doses.
Still, despite the low bar and double counting, Prime Minister Trudeau and his fellow world leaders failed to reach even that goal!

The final communiqué calculated a total of 870 million doses “directly donated”. However, these were not all new announcements – and were not all actual vaccines. We understand that politicians sometimes need to use political spin for their own reasons, but this is a global crisis that needs real action from world leaders, not smoke and mirrors. 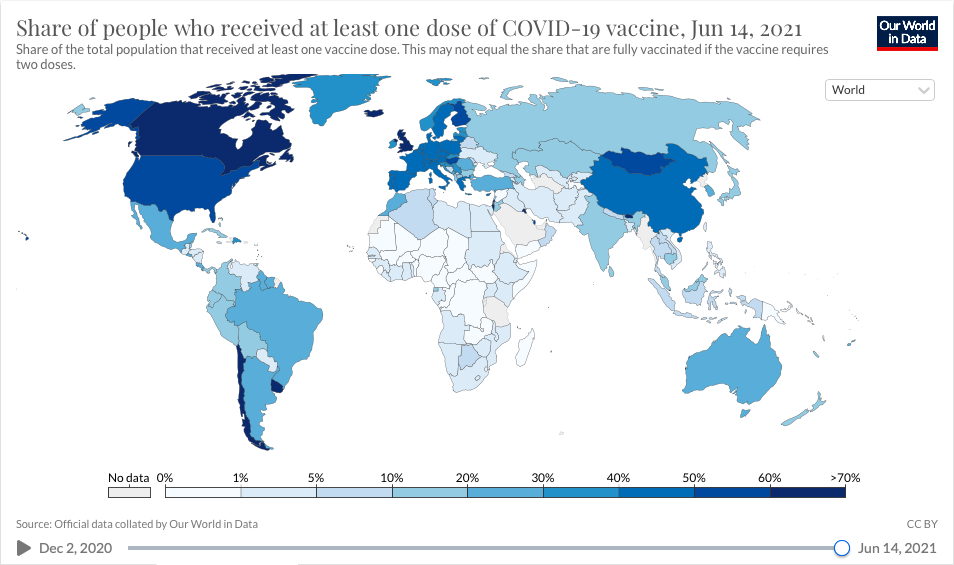 Speaking of dose sharing, Canada came to the G7 Summit as the last country to announce a commitment to sharing. Even then, Canada’s long-awaited vaccine sharing pledge did not come until the very last day of the Summit. If Canada is back, our Government is still very reluctant and slow compared to our peers.

ONE and over 34 other organizations (from across society – doctors, researchers, faith-based groups, diaspora communities, and global development organizations) had been calling on Prime Minister Trudeau to share with the world. For every 10 Canadians who receive a dose, we should share one dose with a frontline health worker around the world (which by July would be about 4 million doses), with the remainder of Canada’s total expected surplus shared by the end of this year (another 90 million doses or so). Remember: Canada led the world in buying up pre-purchased doses. We have an obligation to share those doses to prevent hoarding.

On the Friday, media started reporting that Canada’s pledge would be up to 100 million doses, which, if delivered this year, would have met the long-term part of our ask. But when the official announcement came, it turned out that only 13 million of these were actual doses as opposed to the “double counting” investments. The rest was an estimation of how many doses could’ve been bought from Canada’s previous investments to Covax.

This is not what anyone meant by dose-sharing. We must listen to medical experts and allow science to inform our pandemic response. We cannot use spin to cover up inaction during this crisis.

To be clear, we are relieved to see Canada starting to share vaccines, and if those 13 million doses are sent to Covax in within the next 3 months, they will make a real difference. If this is immediate action, it is a great first step. If it is just more smoke and mirrors, this is really bad news.

Right now, there are no vaccines available at all in the next few months in many developing countries, creating a “gap of death”. Sharing doses immediately is urgent, a real matter of life or death. It is also essential if we want to stop new variants from developing. Variants develop in places where most of the population – including their frontline health workers – still have not received a single shot. These variants put Canada and the global economic recovery at risk too.

Despite all this, the exact timeline of Canada’s commitment is not clear. During Prime Minister Trudeau’s announcement, reporters repeatedly asked for this critical information, but did not get the answer.

As Minister Gould later confirmed, the doses Canada is actually sharing will only come from our own COVAX allocations, and instead of taking more doses from COVAX, Canada will free those up for developing countries. Half of these will come from a vaccine that is not yet approved anywhere in the world (Novavax), although it shows promising efficacy. That also means that sharing these doses is very unlikely before the fall at the earliest.

Dose-sharing should be about speed and tackling the short-term supply gap. That is why we will be pressing the Government for more sharing, and sooner.

Enough is Enough. We have enough doses for ourselves now, and we have enough doses to share. This, at a time when less than 1% of the population in low-income countries have received their first shot. So, instead of smoke and mirrors, let’s listen to medical experts and actually share.

It is worth remembering again that:

That combination means Canada should be #1 in vaccine sharing too.

So, now that we covered the smoke and mirrors that surrounded the issue of dose sharing, what about the rest of the Summit’s key issues?

This G7 was also supposed to shine a spotlight on girls’ education. Prime Minister Trudeau had the opportunity to build on his own legacy from the Charlevoix Summit. In 2018, Canada hosted the G7 and put this issue on top of the agenda. So, when the UK raised the issue again, we expected Canada to be a champion for girls.

ONE and other Canadian CSOs had been calling for a $500 million investment in the Global Partnership for Education (GPE), in response to the growing global need. Unfortunately, the Government slipped in a disappointing flat pledge of $300 million over 5 years.

More than a year into the pandemic, over half of all children are still out of school. Girls in particular are at a high risk of never returning to the classroom. In just one week, 1.3 million 10-year-olds will miss a critical milestone to secure a better future: being able to read a simple story. That is equivalent to 50% of total secondary school enrollment in Canada. Not investing more in education now will have lasting, devastating impacts on many countries’ long-term development.

Ultimately, this insufficient pledge is a consequence of Canada’s persistently low investments in international development. Despite increases in response to Covid-19, Canada still spends well below the average of other rich countries. As a result, the Government cannot afford to properly invest in more than one issue at a time. As the saying goes, Government too often ends up “robbing Peter to pay Paul”, and this time it is girls’ education— one of the best investments there is for ending poverty —that got robbed.

And finally, some really good news (which the Government oddly buried at the end of the Summit).

In the middle of a global pandemic, it is easy to forget about the biggest threat facing our future: climate change. In November, the UK will host COP 26, a conference that must be game-changing if the world wants to avoid the worst of the impending disaster. A key aspect is for rich countries to fulfill their promise of providing $100 billion in international climate finance—funds provided to help developing countries de-carbonize and adapt to climate change.

At the G7, Canada was due to renew its commitment, and it delivered in a big way: doubling our contribution to climate finance, from $2.65 billion to $5.3 billion over 5 years. This meets the demands of the Climate Action Network and Canadians CSOs campaigning on this issue. It is an important signal ahead of the COP 26.

This good news could have positive effects on Canada’s international assistance budget too, but only if the funds are additional to what was announced in Budget 2021. And they really must be. We cannot fund climate while cutting in health, education, or agriculture. We must break the cycle of “robbing Peter to pay Paul”. Our international development investments cannot be effective if we are constantly shifting our resources in and out of various issues. Working on a realistic assumption the that the “additional” portion of this climate finance commitment will be “additional” to the international assistance budget, it could bring Canada’s ODA from an estimated 0.33-34% of GNI to 0.36% in 2021-22. It would mean that Canada would now be about two-thirds on its way to reaching the 1% of Covid-related domestic funds going to international assistance, the demand ONE and others in the sector have been pushing for more than a year now.