In 2017, an estimated 1 million children became ill with Tuberculosis (TB) and 230 000 children died of TB, including children with HIV associated TB. In fact, it is quite common to see people living in sub-Saharan Africa affected by both of these diseases.

At the time Canada-Africa Community Health Alliance (CACHA) was founded, in 2001, the Global Health community was particularly interested in the prevention of HIV and support of those people living with HIV/AIDS in sub-Saharan Africa. However, it became abundantly clear that we would also need to address other diseases in the region, including malaria and TB.

CACHA is a small grass roots organization founded on the basis that improving health of communities will help the individuals of those communities thrive economically and reach their full potential. 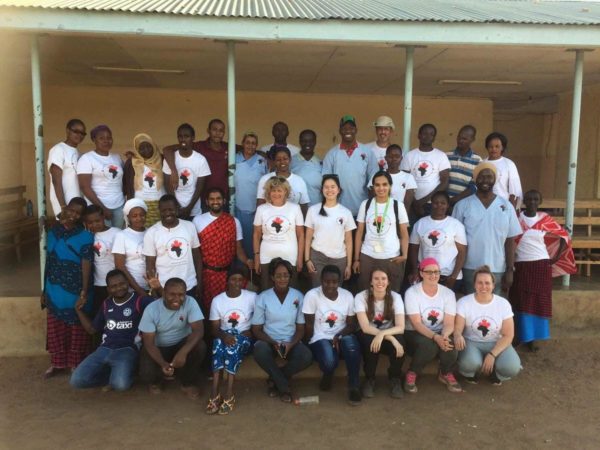 We need to understand the interplay between illnesses and how immune systems weakened by HIV drive epidemics of other infectious diseases in populations most affected by the virus. TB is a classic example. People once affected by TB, once going through treatment, are able to suppress it throughout their lifetime so that it never becomes active. However, if someone is HIV-positive or has an immune deficiency due to malnourishment, the suppressed TB is more likely to become active.

CACHA, in our own small way, help to support the global response to addressing these diseases through medical missions, where Canadian volunteers set up temporary clinics in a community with the aim of assessing and treating as many patients as they can within the short period of time. Our Canadian medical teams work closely with local doctors and nurses, providing training and support, while learning from their expertise.

For CACHA, strengthening communities is beyond the medical support. In fact, we partner with grassroots organizations to help build infrastructure and create programs that empower women and girls. At the moment, CACHA has 13 projects in partnership with local organizations in Tanzania, Benin, Uganda and the Democratic Republic of Congo.

This is because of our strong belief that treating diseases doesn’t just stop at the medical field, it’s a public health issue. If we can create safer environments with access to clean water, proper nutrition, adequate housing, work opportunities and education, while providing basic health care and prevention tools, if we can increase the number of children who go to school including school based meals, and not only build and supply local healthcare facilities but support community outreach initiatives we can not only reduce the burden of disease , we can prevent disease, improve the health of individuals and strengthen communities.

CACHA’s medical missions are just an example in the fight against TB. There are many more grassroots organizations working on the ground with the support of the Global Fund. But the work isn’t done!

Tell the Minister of International Development about the Global Fund and why we need to #StepUpTheFight. Send a postcard to Minister Maryam Monsef!