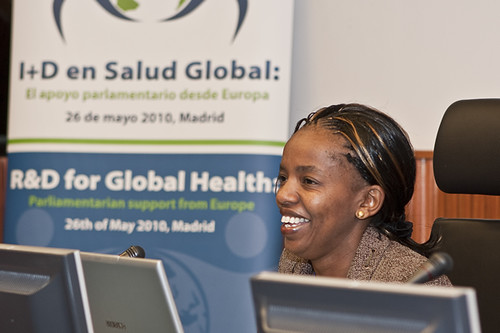 The first person in Kenya to speak publicly about her participation in an HIV vaccine trial, in 2001, was a woman. She was a former classmate of mine and also a medical doctor. I was fascinated to learn that this exciting research was happening right at my doorstep. Not long after, I left my position in the emergency room of a local hospital to join the Kenya AIDS Vaccine Initiative.

It’s becoming more widely known that African women bear the greatest burden of HIV/AIDS worldwide. According to UNAIDS, 59% of all people living with HIV in sub-Saharan Africa are women. What is less well known is the immense contribution African women have made and continue to make to HIV-prevention research. For instance, the first clues that an AIDS vaccine might be possible came from African women. These were a small subset of sex workers in Nairobi and the Gambia who had been repeatedly exposed to HIV but not infected; they were apparently able to resist the virus. The finding sparked a search—which continues to date—for a vaccine that can teach the body to protect itself against HIV.

I am motivated to work in this field because I am convinced that a safe and effective HIV vaccine, one that is made widely available to those who need it most, will be a game-changer for African women. The reality is that millions of women are simply unable to access or negotiate the use of any of the HIV prevention methods currently offered, which makes it critically important that we expand the range of options available.

Today it is International Women’s Day, which for me is a time to celebrate the contributions women have made to HIV-prevention research. Female researchers, volunteers, advocates and decision-makers around the world dedicate themselves to this cause. It is now more urgent than ever that we sustain support for efforts to develop new tools to prevent HIV infection, specifically ones that address the varied needs of women.

A safe and effective HIV vaccine, used in combination with other prevention strategies, is our best hope of ending the AIDS pandemic. But developing new HIV prevention tools takes resources, people, and time—in the laboratory, in safety tests, and in clinical trials. Sustained investments in HIV vaccine research are therefore critical; so is political support.

African women are playing a key role in the global endeavor to stop HIV/AIDS, and in the years to come will continue to be a central force in making an HIV vaccine a reality. Join us in this effort!

Dr. Gaudensia Nzembi Mutua is a research physician at the Kenya AIDS Vaccine Initiative (KAVI). She is based in Nairobi, Kenya.