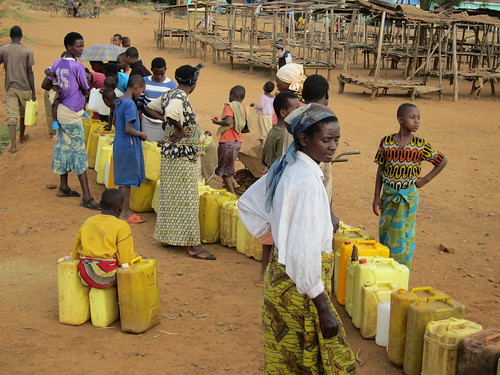 The African Development Bank (AfDB) panels and seminars at the Bank’s Annual meetings have continued to focus on the issues that are of most importance to African countries today.

It is widely accepted that there is a strong link between water investments and economic growth. The Bank estimates Africa’s water infrastructure requirements at US$ 50 billion and yet identifies US$ 20 billion as the financing gap. With insufficient ODA to meet the needs of the sector, there is a pressing need for governments to look at innovative and non-traditional ways to address this financing gap.

The Rural Water Supply and Sanitation Initiative (RWSSI) was conceived in 2003, as a response to the call for an innovative approach to accelerate access to drinking water supply and sanitation in rural Africa. The initiative has been very successful in leveraging funds to the plight of the rural poor. As of the end of 2010, over 33 million people had already gained access to drinking water and nearly 20 million had improved sanitation as a result of the initiative. Furthermore the Bank through the RWSSI programmes has been successful in promoting Paris Declaration commitments. The African Water Facility (AWF) is a funding mechanism established in 2004 focused on mobilizing and applying resources for African water and sanitation sector. AWF is managed by the African Development Bank. Both the RWSSI and AWF are facing resource mobilization challenges. The reousrce uncertainty poses important threats to the achievement of targets set out by both initiatives.

On Wednesday, a panel was convened to discuss the concerns around water scarcity and related sanitation issues with an emphasis on the importance of accelerating resource mobilization for water in Africa. The panel was an important milestone in the preparation of the international donors conference on RWSSI/AWF Financing needs to be held in Paris in September 2011.

Mr. Camdessus told the audience that the situation with water is increasingly a very real problem in Africa that will eventually have global impact. The situation is further aggravated by climate change, now on everyones mind, and the financial crisis which will continue to negatively affect all of the forecasts that we have to date been developed for Africa’s progress. Public financing of programs have taken a hit with the growing challenges in developed countries whose promises to help with development are now facing serious reviews.

The problem around water delivery stems not so much from the availability of water, but from the infrastructure that is needed to support distribution. Huge investments are needed for water infrastructure but it is essential that water be recognized as much a priority for social service delivery as electricity and transport, even as the most important of these three priorities.

A hugely contentious issue in the water discussions were around pricing for sustainability. Most countries are starting to understand that water delivery must be priced at a level which is sustainable to support the infrastructure, and even further, many feel that water is a commodity that should be priced in the same way electricity is. At the event, many in the audience made the point that even the rural poor find the money to buy scratch cards for mobile phone airtime and therefore will make the commitment to pay for water. The overrall conclusion was that innovative financing models for water service delivery must be developed in partnerships between the public sector and the private sector, with the public sector role being to ensure a favorable environment for water service delivery, so that the cheapest possible options for water access can be offered to the rural poor. Legislative and political stability must exist to support these favorable conditions and citizens must be educated to understand that investments in water must have a long term view for realization. The international community should provide added support through mechanisms such as the RWSSI and AWF which is a proven mechanism for delivering service to the poor. The number of people with access to improved water has increased in the past 10 years but if African water scarcity persists then this becomes a problem for the whole world.

Ma Tshepo highlighted certain issues that she did not want ignored in the discussions including the fact that there cannot be one blanket strategy to relieve the problem of water scarcity in rural and dry areas. In areas like Limpopo in South Africa, which is semi arid, almost desert, the investments needed are in the billions and if you want to build cost recovery models with these estimates it will be near impossible. The holisitc support is critical. Further, she emphasize the importance of consultations with the local communities communities so they feel ownership for the facilities.

The message I left with was water financing cannot be separated from economic growth and must be a priority for governments seeking to achieve pro-poor growth in their countries. In order to achieve these goals, holisitic approaches that include the public sector, private sector and international community must be employed and proven mechanisms such as RWSSI and AWF must be supported.