By Katerina Vittozzi for UNICEF

Fanna Mohammed is worried about her son. Seven-month-old Umara is thin and listless. He rests his head against his mother’s shoulder as she carries him in her arms. It’s impossible to get him to raise a smile.

The family fled their village in a rural area of Nigeria’s Borno state earlier this year due to the ongoing Boko Haram-related crisis. Now they live in a camp in the state capital, Maiduguri. Muna Garage camp is home to an estimated 20,000 people; 8,000 of those are children under the age of 5.

Because of the Boko Haram-related crisis, 14 million people across the northeast of Nigeria are in desperate need of assistance. More than half are children. In Borno state alone, there are more than 1.4 million displaced people. The majority live in host communities but around a quarter of a million people live in camps for IDPs – Internally Displaced People.

“At the moment, the critical urgent gap we see in all the IDP camps is the availability of food,” explains UNICEF’s Senior Emergency Coordinator AbdulKadir Musse. “People could not cultivate in the last two years; still they do not have access to their cultivation areas and there is no… all livelihoods are being lost! That’s why we see high rates of malnutrition.” 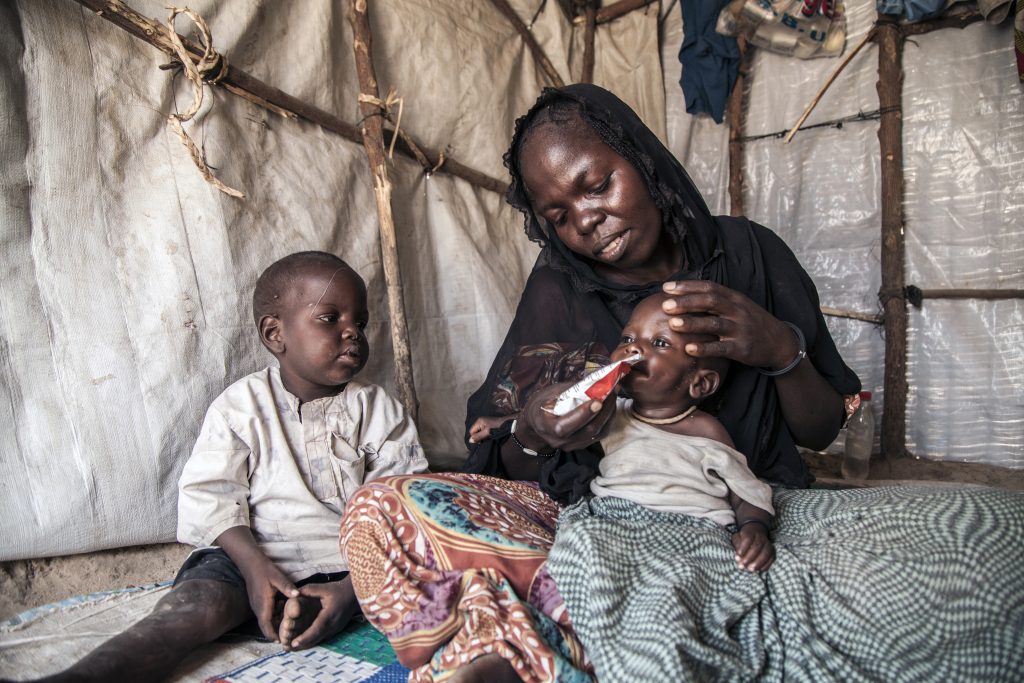 Fanna says Umara’s been ill for the past few week. He is physically showing signs of severe acute malnutrition. The bones on his chest and back are prominent; his skin is loose around his arms and legs.

Today, Fanna’s brought Umara to a UNICEF-supported medical clinic that’s situated within the camp. A dozen or so other women are also there with their babies. They sit patiently on a long bench inside the tent, trying to keep their children entertained whilst they wait to be seen.

“The child is severely malnourished and dehydrated,” Abdullahi explains. “Umara looks very down, he doesn’t laugh, he doesn’t play, he does not look okay at all.”

Umara is immediately given life-saving treatment. Abdullahi shows Fanna how to feed her son with a packet of Ready-to-Use Therapeutic Food (RUFT). RUFT is a peanut-based paste that’s high in calories and full of added vitamins and minerals. Three packets a day for eight weeks can save the life of a child with severe acute malnutrition. Lying in his mother’s arms, Umara slowly but surely eats the food. Before he’s allowed home, the health team put him on a course of extra vitamin A, antibiotics, and antimalarial medicine. 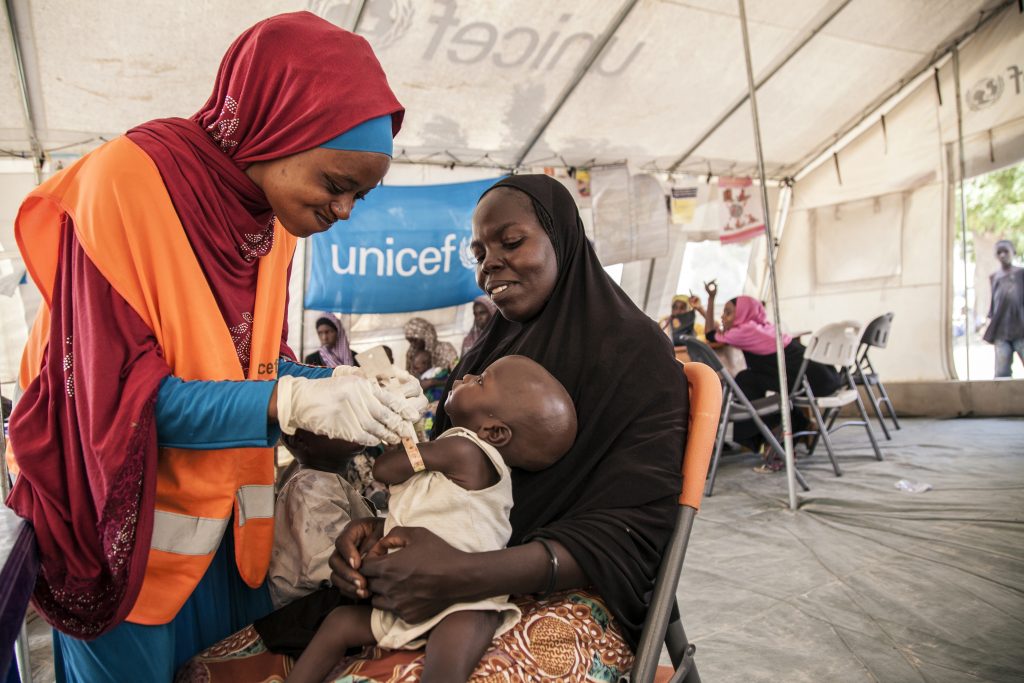 Umara’s one of more than 117,000 children across northeast Nigeria that UNICEF’s admitted to therapeutic feeding programmes. But there are still thousands more that need urgent help. The UN’s Office of Humanitarian Affairs (UNOCHA) estimates that 75,000 children in northeast Nigeria are at risk of dying of hunger “in the few months ahead”.

A week later, Umara’s back at the clinic for his second screening. There’s a small, but steady improvement. His arm is plumper, at 9.7CM and he’s put on a little weight. The scales read 4.3KG.

But it’s at Umara’s third screening that the improvement is more visible. He’s put on yet more weight – he’s 5.1kg – and his arm circumference is now 10cm. He’s still classified as severely malnourished but the improvement, both physically and in terms of his general well-being, had made staff optimistic that he will make a full recovery is he continues on the feeding programme. 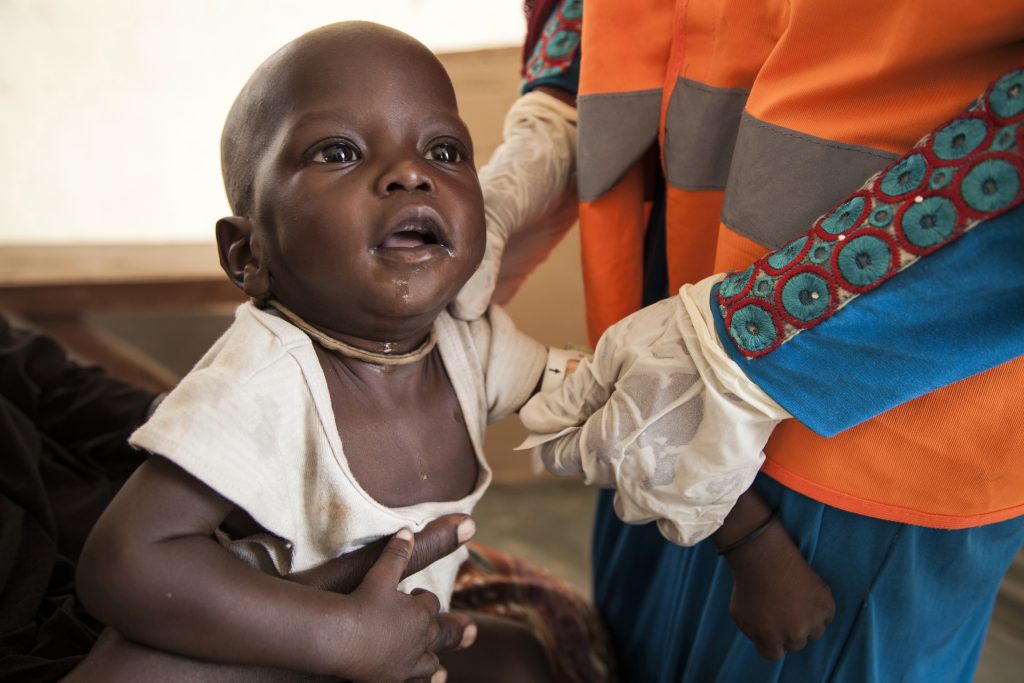 Umara is assessed for malnutrition by a UNICEF Nutrition Officer at a UNICEF supported health clinic in northeast Nigeria. (Photo credit: UNICEF)

Umara’s mother, Fanna, looks visibly relieved. For the first time since we met three weeks, she smiles as she holds a bright and engaged Umara in her arms.

“He can play, eat and drink now,” Fanna says. “He is not being sick anymore. He is so happy!”

Read the open letter about the tragedy unfolding in northeast Nigeria.