A roundup of the latest news, stats, and analysis of COVID-19’s impact in Africa. View our data tracker and sign up for our weekly newsletter, and read on for why we could be seeing just the tip of the iceberg of the third wave in Africa, how wealthy nations are shooting themselves in the foot, and the latest on the feared outbreak of the Marburg virus in West Africa.

Overwhelmed: Confirmed cases of COVID-19 in Africa have ticked over 7 million, as the virus continues to rip through the continent’s largely unvaccinated population. In Zimbabwe, record numbers of deaths from the virus have led to widespread delays in burials. Undertakers are struggling to cope with the added pressure, and bereaved family members are waiting days for a burial slot. In Senegal, hospitals are quickly becoming overwhelmed: 90% of calls to the country’s emergency paramedic service are currently for “respiratory distress.”

Hidden pandemic: This could be just the tip of the iceberg. A recent study in Sudan found that up to 98% of COVID-19 deaths had probably gone unrecorded between March and November 2020, due partly to chronically low levels of testing. Sudanese healthcare workers estimated that the “hidden pandemic” had likely killed “thousands if not tens of thousands” more than the official figures.One doctor said “We haven’t been spared the worst. We’re just not counting.” The true death toll from the pandemic in Africa is likely 11 times higher than officially reported, according to the Economist.

Shot in the foot: Meanwhile, wealthy nations including the US, France, and Germany are set to press ahead with third doses of COVID-19 vaccines for their citizens, ignoring an appeal from the WHO to hold off on booster shots until more people around the world are vaccinated. Apart from the obvious moral considerations of global vaccine inequity (only 2% of people in Africa are fully vaccinated), rich nations are acting against their own self-interest by continuing to hoard vaccine supplies. Just this week, experts in the US warned the Biden administration that dangerous, vaccine-resistant variants of COVID-19 will emerge if the virus is allowed to circulate freely through unvaccinated populations in low-income countries. For wealthy countries, every third shot in the arm of citizens might as well be a shot in the foot. 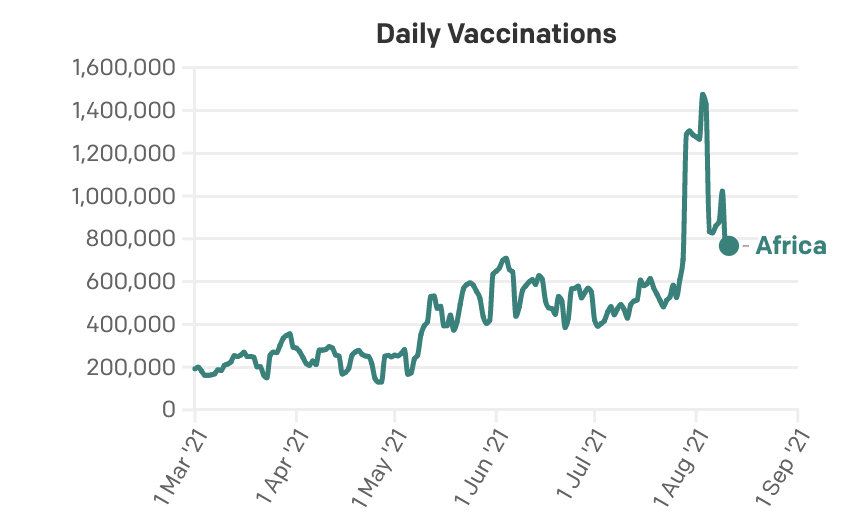 Outbreak²: West Africa this week recorded its first-ever death from the Marburg virus, a highly contagious Ebola-like virus that reportedly kills half of the people it infects. The death occurred in Guinea, in the country’s Guéckédou region, which also had an Ebola outbreak earlier this year. WHO Africa Director Matshidiso Moeti said the virus has the potential to “spread far and wide,” warning that it must be “stopped in its tracks.”

No work, no food: The pandemic has led to a dramatic spike in global hunger. The World Food Programme warned this week that “conflict, the economic repercussions of COVID-19 and the climate crisis are expected to drive higher levels of acute food insecurity in 23 hunger hotspots over the next four months.” Most of these hotspots are in Africa, where the rate of undernourishment is more than double any other region in the world. The situation is particularly dire in Ethiopia (more on that below) and southern Madagascar, where hundreds of thousands are at risk of famine after a severe drought. Amer Daoudi, senior director of operations at WFP, said “I have never seen it as bad globally as it is right now.”

J&J rolling: The African Union is now shipping Johnson & Johnson vaccine doses around the continent. This is the first time that AU Member States have collectively purchased vaccines — marking an important step forward, AU’s COVID special envoy Strive Masiyiwa explained. A total of 6.4 million vaccine doses are expected to be shipped to AU Member States in August 2021. However, Masiyawa stressed that the vaccine situation in Africa remains a “crisis,” pointing to the failure of the COVAX facility to deliver the 320 million vaccine doses that had been promised to the continent by August.

Down with Delta: The J&J doses will be particularly welcome following a recent study conducted in South Africa, which showed that the J&J shot is effective against the Delta variant of COVID-19. The study involved 477,000 healthcare workers who received the shot between February and May of this year. It found that the vaccine is 71% effective at preventing hospitalisations and 96% effective at preventing death from the Delta variant.

Welcome boost: While it’s true that the COVAX facility has failed to meet its delivery targets, Sierra Leone was buoyed this week by the arrival of a second batch of AstraZeneca vaccines through the facility. 96,000 doses were delivered to Sierra Leone on Monday, as the country looks to intensify its vaccine rollout amid a sharp spike in infections.

Code red: The Intergovernmental Panel on Climate Change (IPCC) launched a landmark climate report this week, warning that climate change is widespread, rapid and intensifying, and, perhaps most importantly, caused by human activities. The report also highlighted a startling lack of data on the effects of climate change in Africa. It noted an increase in extreme rainfall in two of the nine Afican sub-regions — but for the other seven regions, there was “limited data and/or literature.” Youba Sokona, vice-chair of the IPPC, said that “all of Africa, in general, is vulnerable, given the level of development. The entire continent is highly exposed to climate extremes, at a relatively high level of vulnerability, which amplifies the problems that the continent is experiencing.”

Catch-22: Credit agencies are punishing low-income countries for investing in healthcare during the pandemic. Recovering from COVID-19 requires sustained investment in health and social services, but low-income countries that planned to do just that have seen their credit ratings downgraded by private companies, making it harder and more expensive for them to borrow. New research shows that when credit ratings fall, governments spend less on healthcare. That is… suboptimal in the middle of a pandemic!

Escalating: The conflict in Ethiopia’s Tigray region continues to escalate, as hundreds of people were killed while sheltering in a health facility. Food and health systems have been deliberately targeted during the conflict, even as the COVID-19 virus continues to circulate. An assessment by Médecins Sans Frontières in March found that only 13% of health facilities in the country were functioning normally. The UN warned that an estimated 400,000 people are now living in famine-like conditions in the region, with close to 2 million more on the brink of famine.