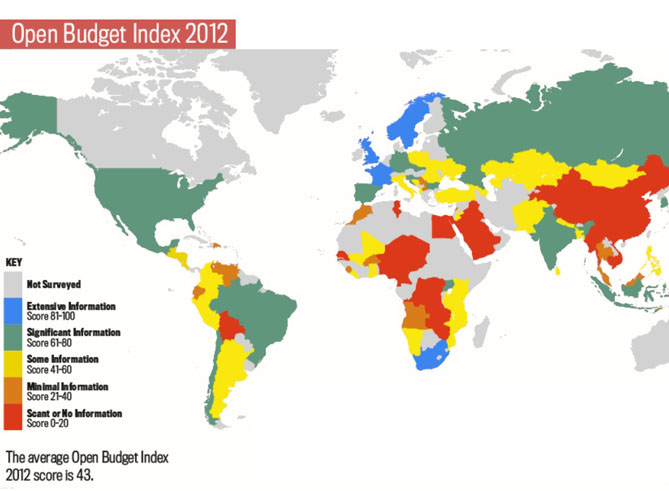 Today, the International Budget Partnership (IBP) – ONE’s key partner for efforts to promote open and transparent budgets in developing countries – released their 2012 Open Budget Survey. The 2012 Survey assesses 100 countries on 125 questions; 95 about the availability to the public of documents related to the budget cycle, and 30 about how citizens may participate in their country’s budget process. The Survey was carried out in 2006, 2008 and 2010, but has evolved over time. This year, IBP has partnered with the Open Knowledge Foundation on a Data Explorer, where you can see maps and rankings of Open Budget Index scores, sort questions by topic, or look at how the rankings have changed over time. Check out the data – the results may surprise you! 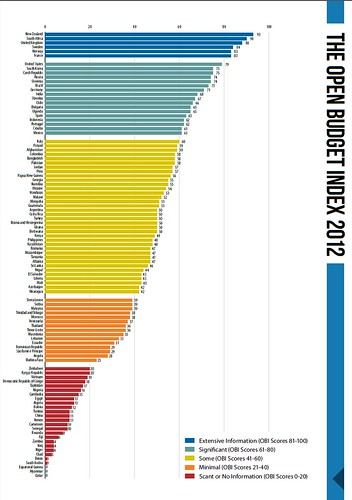 New for this year’s Survey is a series of questions on participation, something which IBP and ONE agree is essential if budget transparency is to pay dividends in terms of accountability and improved development results. The average score for the 100 countries surveyed in the 2012 survey is just 19 out of 100 on the 30 questions that measure participation. We’re excited that IBP is focusing on improving participation, and about the innovative ways the survey shows countries are getting citizens involved – including South Korea’s finance ministry field trips, Trinidad and Tobago’s public forums, and New Zealand’s tax hotlines – which allow citizens to report tax evasion or fraud anonymously. Sharing these stories helps to show that not all participatory budget processes have to look the same.

The Survey includes the 2012 Open Budget Index, where countries are ranked on a scale of 0 to 100 based on the 95 budget questions. Countries score zero by making no budget documents public, or 100 by being completely transparent and making public all documents.

For 40 countries, data illustrates that progress has been made since 2006; those countries’ average Index scores increased from 47 in 2006 to 57 in 2012. The Index also shows that countries that start from a low baseline of transparency improve faster than those whose scores are nearer the middle of the ranking. Similarly, it’s even harder for countries that score well to improve significantly. Since the 2010 Index, countries that had been the least transparent, with scores of 40 or less, improved from 19 in 2010 to 26 in 2012, a 36 percent increase. Otherwise, however, progress was limited between 2010 and 2012.

How is Africa Doing?

Among African countries, South Africa leads the way with a score of 90 on the Index. This score is 2nd overall, behind only New Zealand, and ahead of the United Kingdom. Uganda also scores well, with 65, in the “significantly” transparent category. Unfortunately, 14 of the 26 countries in the index that provide “scant or no information” on budget documents are African. However, bad Index scores are relatively cheap and easy to fix. By simply making public budget documents that countries already produce, Index scores would improve significantly. And making those documents public is crucial for citizens in those countries to see how their governments are spending money.

There are seven countries where transparency has improved significantly (by more than 15 points) since 2010: Afghanistan, Burkina Faso, the Dominican Republic, Honduras, Mozambique, Pakistan and São Tomé e Príncipe. However, in Egypt, Zambia, Sri Lanka and Serbia, scores decreased by more than 15 points since 2010. So while improving budget transparency can be easy in the short term, institutionalizing participatory budget processes is more difficult, but necessary to ensure that progress is maintained and built upon by civil society.

South Africa maintained very high levels of budget transparency in the 2012 Index, and while their rank dropped from 1st to 2nd in this year’s Index, their very high level of budget transparency – higher than that of the UK, France, Norway, Sweden and the United States – is very impressive. And the information that the South African government makes available has been used in successful budget advocacy. IBP’s website has multiple cases studies of local organizations using information about the budget to execute effective campaigns. One, by the Treatment Action Campaign, resulted in a National Treatment Plan for HIV/AIDS, putting 1.6 million HIV+ South Africans on ARV treatment. Another campaign focused on improving access of a social security grant to poor children increased access from 2 million in 2001 to nearly 11 million in 2012.

The IBP’s Open Budget Survey and Index are incredibly important to us, and to citizens around the world who need information in order to hold their leaders to account for the money they spend. We commend IBP on another job well done, and look forward to hearing more stories about how transparency is helping civil society around the world make the changes they want. Open Budgets, Transform Lives.