I am reminded of a story told by Professor Wangari Maathai of a hummingbird trying to save a burning forest with drops of water carried on its beak, as larger animal forests watched.  Bewildered at the hummingbird’s clearly futile efforts, the other animals ask the humming bird what she thought she was doing.  Without stopping, the hummingbird says, “I am doing the best I can.” 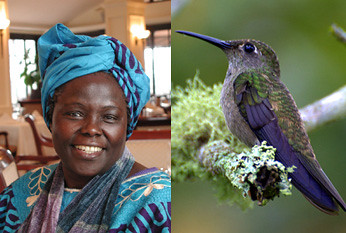 And this is the way the Professor lived.  She called herself a hummingbird, doing the best she could, to viciously protect the environment, to the chagrin of more powerful people in authority, who stood by and watched, sometimes calling her a crazy woman.

But Kenya’s hummingbird, never lost momentum, was never discouraged, she pushed on, and on and on.  Some of the larger animals standing by, suddenly got very uncomfortable, she was sometimes beaten and tear gassed, for standing up for the environment she believed in. But our hummingbird never stopped. Her song got louder and louder, and soon other hummingbirds joined her.  Thanks chiefly to her, Kenya’s Karura forests and Uhuru Park still stand.

In 2004, the world celebrated with the her, when she became Africa’s first woman Nobel Peace Laureate. Gone were the disdainful references to ‘that crazy woman’.  The world now hailed her, calling her a woman of substance, a woman of peace, a woman whose courage inspired us all.

I had the privilege of meeting and working with Prof. Wangari on a few occasions.  The first time I met her was at an assignment in Nairobi’s Westlands area, Wangari was fighting for space for flower and tree vendors to continue their trade.  We were soon dispersed by policemen and ordered to leave the area.  But not before Wangari had her say, she let them know of the importance of this trade in securing a furture for generations to come, over the commercial building, the government was proposing to set up.

Ever versatile and down to earth, whether it was brushing shoulders with the powers that be on the corridors of Kenya’s State House, or the numerous VIP forums on the world’s stage to the hills of her Ihithe home, Prof. Wangari Maathai was boldly true to her message and consistent in her call to save the world’s forests.

Prof. Wangari began a billion tree planting campaign with the Greenbelt movement she founded in 1977, and it is said that she had planted at least 40 million trees across Africa before her untimely death.  This is why, even at the age of 71, many Africans still feel the sting of her death.  I could almost equate the sense of loss of Prof. Wangari Maathai to Africa, to that of Princess Diana to the British… gone too soon our hummingbird.

But even as Africa grieves her passing, your song lives in our hearts, your life continues in the trees; as I would say in her native kikuyu language, “huruka Maitu Wangari”—Rest in Peace, mama Wangari.