A roundup of the latest news, stats, and analysis of COVID-19’s impact in Africa. View our data tracker and sign up for our weekly newsletter, and read on for news from UNGA, the ripple effects of a nuclear submarine deal, and details on how pharmaceutical companies’ reluctance to share their technologies is fueling a human rights crisis.

Nuclear threat: As leaders and diplomats gather in New York for the United Nations General Assembly, French fury over a cancelled order for submarines risked undermining global cooperation on a real crisis: COVID-19, which has killed 60,000 people in the past week. Thankfully, sense (mostly) prevailed as President Joe Biden garnered support for a first-of-its kind goal to end the pandemic everywhere: vaccinate 70% of the world’s population in every country by September 2022, alongside important targets on PPE, oxygen, and therapeutics. 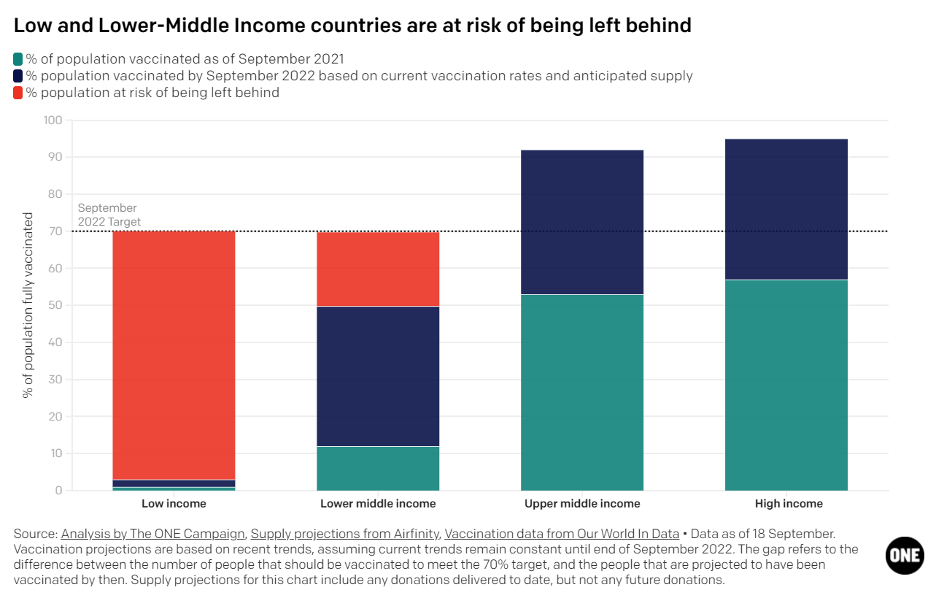 We need to go big: The US put an additional 500 million shots on the table; roughly one-third of the 1.6 billion additional doses needed to hit the target. Japan doubled its commitment, and Italy tripled its previous dose pledges, while Australia, New Zealand, Sweden, and Spain also stepped up. But the follow through is all that matters. In the words of the AU vaccine envoy “you pledge and deliver or not pledge at all.” The good news: There are plans for follow-up meetings. US Secretary of State Antony Blinken will convene foreign ministers on their commitments before the end of the year, and Biden will hold another summit early next year to keep feet to the fire.

Scars of racism: Congolese President Felix Tshisekedi used his UNGA speech to highlight the vaccine apartheid among “the scars of racial inequality, subordination and discrimination, which were built under slavery, apartheid and colonialism”. 77% of COVID-19 vaccines have gone to people in wealthy countries, with just 1% going to low-income countries.

Missing in action: President Emmanuel Macron was notably absent from the COVID-19 summit, likely due to the geopolitical tensions emerging from last week’s explosive submarine deal. Meanwhile, UK Prime Minister Boris Johnson seemingly just didn’t turn up, despite being on the agenda. We don’t know why. ONE’s UK Director Romilly Greenhill didn’t mince her words in response, saying it “raises serious questions about Britain’s role on the world stage.” But despite the fact that the EU’s trust in the US “has been eroded,” the two announced a new collaboration on a COVID-19 Manufacturing and Supply Chain Taskforce.

Vaccines to vaccinations: Several billion dollars worth of commitments rolled in at the summit to strengthen health systems and actually get vaccines from tarmacs to arms. This reflects an increased realization that actually distributing vaccines could be the most significant challenge of this phase of the pandemic. Pfizer (aka ultracold chain-reliant) doses require this mission-critical infrastructure.

Pas Pret a Manger: Diplomats may have left the UN building for a quick coffee: latte sales skyrocketed in Manhattan, fueled by Wall Street’s in-person re-emergence. It bears a striking contrast with soaring food prices that are hitting low-income countries hard. Two key drivers of the ongoing price surge are climate change and COVID-19, both of which are focal points of this year’s summit and are expected to protract and entrench a crisis that left 1 in 3 people without adequate food in 2020.

Fuel to the inequity fire: Pfizer has donated less than 1% of its production to low-income countries, while Moderna hasn’t sent a single dose and doesn’t plan to ship the vast majority through COVAX until 2022. This is despite increasing pressure from the Biden administration, the World Health Organization, and a host of African leaders. Detractors have accused these companies of “fueling an unprecedented human rights crisis,” while BioNTech, Moderna, and Pfizer are set to earn $130 billion by the end of 2022.

Ready and waiting: Kenya is the latest African country to start building a filling plant for the COVID-19 vaccines with production starting in Q1 2022 and full capabilities by 2024. But the end-fill process does not require the mRNA technology transfer — just packaging the vaccines for distribution. Experts argue that it’s a sign of a fundamentally broken production scheme that necessitates localized production. African countries are growing increasingly impatient for pharmaceutical companies to transfer the mRNA technology. #BuildBackBetter

Boost and bust?: Booster shots to people over age 50 in rich countries could eat up 1 billion doses. That’s enough to vaccinate 40% of Africa’s population. Ironically, the call for (medically unnecessary) boosters stems from the deadly Delta variant. As we keep saying, you’re safer sharing because vaccine inequity is actually a breeding ground for more variants.

Lost decade: More than 100 countries are cutting health and education budgets. This is, of course, driven by the grotesque vaccine inequities. One-third of South Africans say they have regularly gone without food, cooking fuel, and clean water in the past year because of economic hardships. While the US is growing at its fastest rate since 1894, 52 of the world’s poorest countries will decrease per capita spending into 2026.

Breaking bad business: The World Bank has finally killed its terrible Doing Business Index, which incentivised countries to cut taxes, social spending, and more. But not before a corruption scandal in which the senior bank staff cooked the books to give China and Saudi Arabia higher scores ahead of the bank’s planned capital increase. An external report found multiple instances of national governments pressuring staff to change rankings and charges of quid pro quo for a rankings bump. Now would be a good time for a major act of goodwill from the bank. Top tip: Maybe it could act like we are actually in a global pandemic?