With a country-wide unemployment rate of 32.6% and over 2.4 million confirmed cases as of August 2021, COVID-19 has been wreaking havoc on South Africa. And Johannesburg remains the epicenter of the virus’ spread.

In western Johannesburg, however, Queen of Hearts Circle, founded by Mariam Behr, has been stepping up to support community needs during the pandemic, raising awareness and educating the community on COVID-19 safety.

How Queen of Hearts started

On October 10, 2007, Mariam’s 17-year-old son, Malik Stiglingh, and five of his high school classmates visited Fordsburg Plaza to watch a fireworks celebration for the end of Eid. “A man who was high on drugs started a fight in the same area,” Mariam said. “We don’t know exactly what happened, but [the man] stabbed seven [young people],” including Mariam’s son. 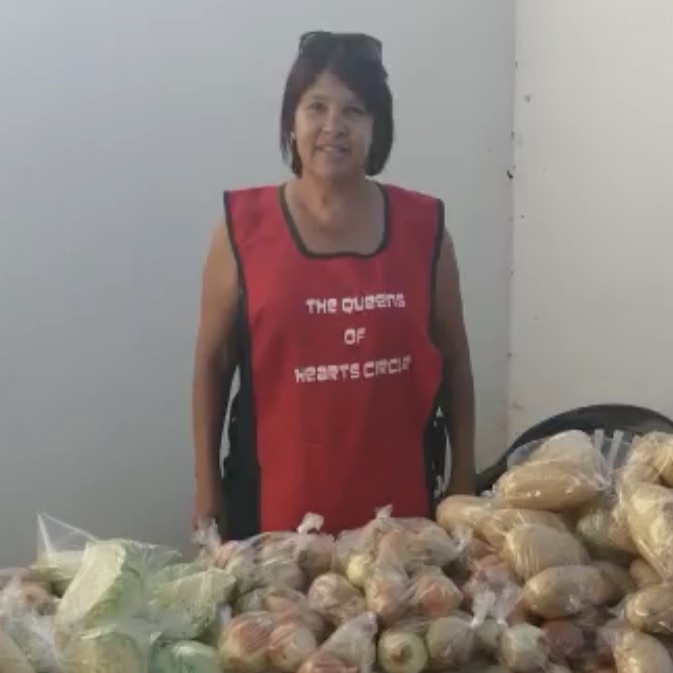 “My son was stabbed in his heart,” she said. “His name was Malik. He was 17 years old. He was in his matric year,” Mariam said. He passed away in the hospital, where Mariam met other mothers impacted by the tragedy, whose children had been stabbed in the back by the same man.

“The Queen of Hearts was started because my son was very much involved [in the community]. Although 17, he always used to go with me to community outreach events,” Mariam said. Queen of Hearts was a way to honor her son’s memory and respond to the violent uprising of crime and substance abuse within their community. She founded Queen of Hearts with two of the mothers of children who experienced the same tragedy in 2007, Lorraine Docking and Salwaa Begg.

“We met at the hospital and from then a bond was formed,” Mariam said. Their first fundraiser was to help the families of those injured in the incident afford medical expenses.

“We wanted to start something in his memory that would have a positive remembrance from the tragedy that happened,” Mariam said. When they started in 2007, they used their own money to give 20 grocery parcels to pensioners in the community. “That’s how we started.”

Addressing the needs of the community

West of Johannesburg, in the communities of Bosmont, Newclare, and Claremont, crime rates, substance abuse, and the abuse of women and children are high. Before the onset of COVID-19, the unemployment rate in South Africa was 29.1% in 2019, compared to 32.5% in the last quarter of 2020, a new record high since the survey began in 2008. Beyond unemployment, children were left unattended by parents suffering from drug addiction. Between 2005 and 2015, the drug abuse cases in Bosmont rose from 95 to 1,515, a 1600% increase. 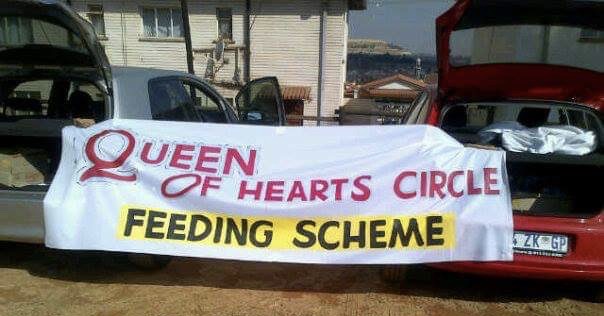 “We realized there was a great need in the community,” Mariam said, to help young people affected by substance abuse, like the man who killed her son and injured so many. Instead of turning away, Mariam and Queen of Hearts began addressing their communities’ needs firsthand.

“In our second year, we ended up providing groceries, help, and counseling to 500 elderly and young people,” Mariam said. Queen of Hearts also helps young women via their skills upliftment program, where women who complete a rehabilitation program learn how to be a nail technician or seamstress.

Partnering with the Chayil Foundation, a foundation that serves communities in South Africa, in Bosmont, Newclare, and Claremont, Queen of Hearts feeds between 300 and 750 families each month, builds libraries and orphanages, and supports 100 families with packed school lunches for their children, transportation, uniforms, and school supplies. In addition to feeding the community, they also arrange free counseling sessions to address the impacts of emotional trauma and help other young people in crisis with the rehabilitation center for young women.

Another organization Queen of Hearts partners with is Cargill, which works with other organizations, producers, and farmers to sustainably nourish the globe and give back to the community.“One of the main reasons why we continue to partner with Queen of Hearts is that their contribution and involvement extends beyond providing meals to the needy, but also empowering and educating the women in the community to become skilled and self-reliant. They also provide support and rehabilitation programs for kids that come from abusive homes and to help keep kids off the drug-rife streets, providing them with much-needed education, love, and care,” Melisha Reddy, Cargill’s counterparty risk and compliance specialist in Johannesburg, shared. 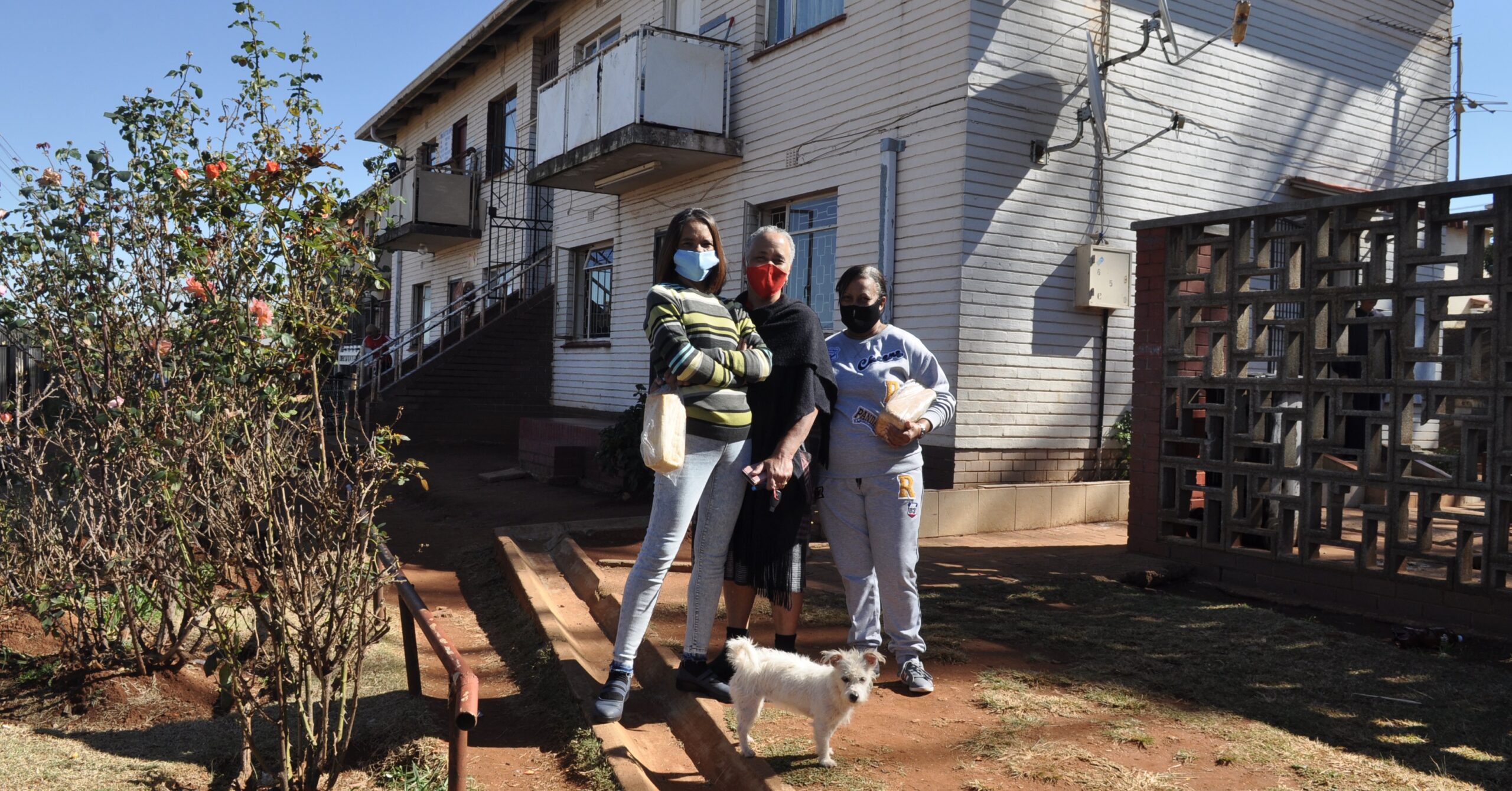 “The passion and drive of these women, which I have seen and experienced first-hand, is truly remarkable. They have taken their pain and used it as a strength to be of service to others in need.”

How COVID-19 has impacted their work

When the COVID-19 crisis began, the women behind Queen of Hearts didn’t back down.

“A lot of families lost their jobs. A lot of people are out of work, and the families are struggling,” Mariam explained. As the needs of the community changed, severely affected by unemployment, substance abuse, and crime, so did their response.

“Once a month, we cook for over 3,000 families,” Mariam said. “We go out to the streets and give out cooked food and flyers, and create awareness, so [the community is] aware [of] what COVID-19 does, what it is, and how to protect yourself.”

At the Fleur Empowerment Centre under the Chayil Foundation, which partners with Queen of Hearts, the women who’ve learned to sew make masks for the community, along with hand sanitizers. They also educate others on COVID-19 and make sure that social distancing is practiced. 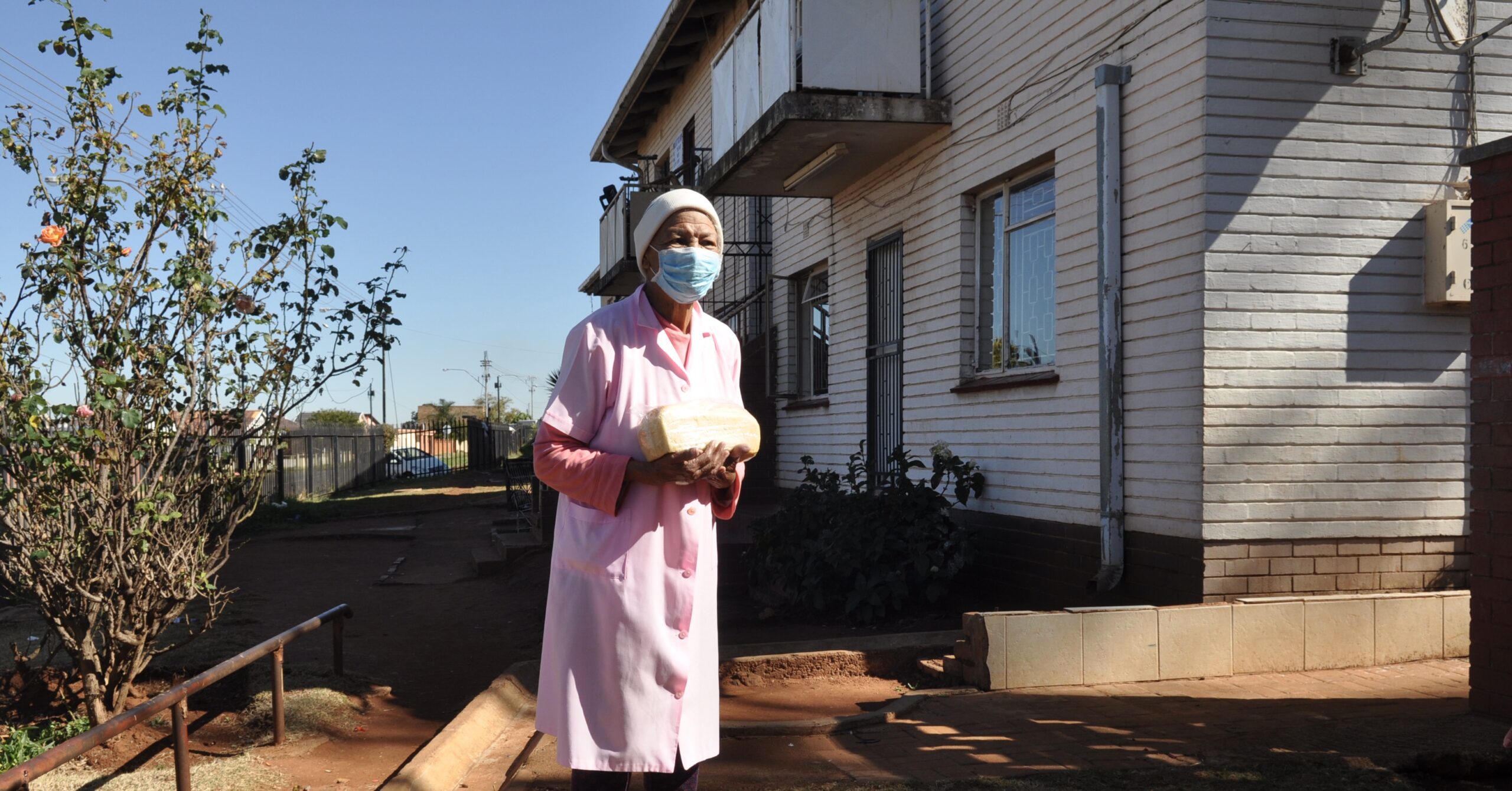 “We raise awareness about the pandemic in all of the communities we are involved in to make sure everyone is aware [of] how to take care of themselves and their families,” Mariam said. They even hand out grocery parcels to families in need and blankets to the elderly.

When civil unrest, violence, and looting broke out in July 2021 across South Africa’s provinces of KwaZulu-Natal and Gauteng, Mariam and Queen of Hearts responded quickly to the tragedy devastating their community in Johannesburg. In response to the imprisonment of former president Jacob Zuma and the increase in poverty and food insecurity as a result of COVID-19, looters targeted shopping malls, factories, and warehouses, many of them in impoverished townships that have been hit hard by three waves of COVID-19 infections, lockdowns, and job loss.

Like many across KwaZulu-Natal and Gauteng, especially in Durban and Johannesburg, Mariam said, “We are impacted by having no bread and milk due to no deliveries and people panic buying since yesterday.” Since the unrest began, Queen of Hearts has been handing out sandwiches, oranges, and food packs to children, families, and the elderly, and in July 2021, they cooked meals of dahl, chicken, rice, potatoes, and oranges to anyone affected by food shortages and the loss of their businesses and livelihoods.

Mariam said her friend, Robyn Le Roux in charge of the Fleur Empowerment Centre, lost her and her husband’s business in the riots. “Their business was looted and burned to the ground. They lost everything,” she shared.

But Queen of Hearts is diligent in their commitment to stay strong and stay united to protect their community, no matter what the circumstances.

“We decided [that] out of [the tragedy of losing Malik], we would form something positive,” Mariam said, and already out of the tragedy of COVID-19’s continuing impact on South Africa, Queen of Hearts and the community have been standing together to face the fight.