“Farming is the future.  Famines should be consigned to history.”

A group of smallholder farmers and ordinary African citizens marched to the State House in Tanzania today, to deliver a petition signed by more than 16,000 African ONE members.  This was the first time Tanzanian President Kikwete had received a continent wide petition, and the first time ONE had delivered a petition on African soil. 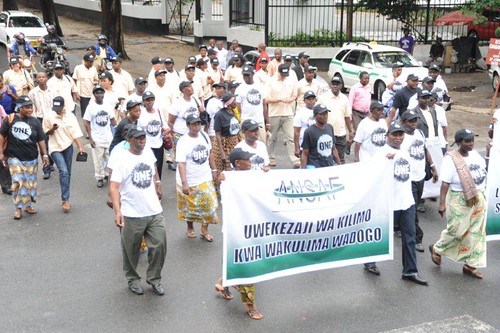 ONE members and partner organisations march to State House

President Jakaya Kikwete captured the soul of the event when he explained its importance, saying:

“It is important because it reminds us that Agriculture is the life-blood of our country, sustaining our people in towns and villages and meeting their basic needs.” 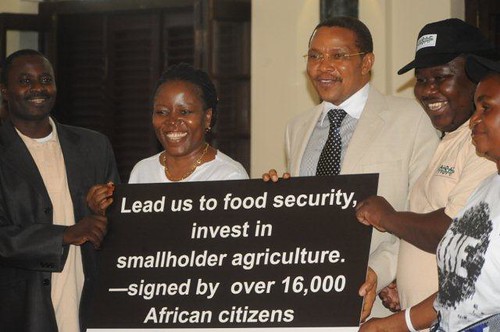 “Hunger is not acceptable. Hunger makes people suffer, affects child’s mental growth, diminishes the honour of the family and nation. World leaders have a role to play. Invest in agriculture, support the future generation and attain the MDGs”

The petition calls on African leaders to provide greater food security for ordinary Africans by investing more in support for smallholder farmers.  ANSAF, (Agricultural Non State Actors Forum), who have been key partners in the Hungry No More campaign, were also present.  Campaigners called on President Jakaya Kikwete to take the lead on investment in sustainable agriculture, setting the standard for other African Heads of State.

“If you want to reduce poverty, you need to go where poverty is. Reducing poverty will mean targeting investments towards smallholders in order to employ local labor, supply local markets and spend earnings in local markets which creates multiplier effects in rural economies, improves local food self-sufficiency and reduces rural inequality.

This is why President Jakaya Kikwete’s government commitment to continue focusing on building an enabling environment for smallholder farmers, is encouraging. Currently only 7 African countries have kept their promise to do 10% – this number must increase by the tenth anniversary in 2013, and we are delighted Tanzania is leading the way”.

The petition also challenges African leaders to demonstrate their resolve in tackling famine and other agriculture related problems on the continent by:

The petition is part of a campaign led by ONE in Africa, ANSAF and other African partners stressing on the importance of agriculture in sub-Saharan Africa, where more than three-quarters of the poor live outside of urban centres and depend on agriculture for their livelihoods.

“MKUKUTA and the Tanzania Five Year Development Plan commits the government to address food insecurity and poverty, among others. In the Tanzanian context, and probably most of African countries, poverty is a rural phenomenon, and agriculture is the main livelihood source. Tanzania can attain some of the Millennium Development as well as MKUKUTA Goals if we invest in agriculture and particularly smallholder farmers. Let us increase the share of agriculture that benefits smallholders and transform the sector for equitable economic growth”.

Studies show that in 2010 agriculture contributed at least 24% to Tanzania’s GDP, accounted for 60% of its labor and provided 34% of its exports. This was far more than the 17.3% contributed by the Manufacturing, 28.2% from minerals and 22.5% from the tourism industry. The strategic importance of agriculture to Tanzania’s fight against poverty is therefore not debatable.

The potential for agriculture in Tanzania and across the region is immense – the right investments now can help ensure that agriculture helps lead the economic transformation of the continent.  Currently, Tanzania spends close to 7% of its budget on Agriculture. Nearly ten years ago African leaders made an historic promise to their people, – especially those amongst the poorest – it was to spend at least 10% of the budget on agriculture and farming. Few have kept this promise. Before the 10th anniversary its time they all did so as part of other improvements to beat hunger and boost wellbeing across Africa.

Following today’s event ONE and partners will take the campaign to forthcoming regional events including the AU Summit in Malawi in July.

A big thank you to all ONE members who signed the petition. With your help we really are making a difference!