Earlier this week, ONE met up with 30 of our Liberian members in Monrovia at a local watering hole called Tides, which overlooks the Atlantic Ocean. As I reported earlier, we have been in Monrovia the past week to engage the High Level Panel on the Post-2015 MDGs (HLP) during their meetings and consultations. We couldn’t pass up the opportunity to meet with some of our members and hear their views on the issues affecting development in Liberia. 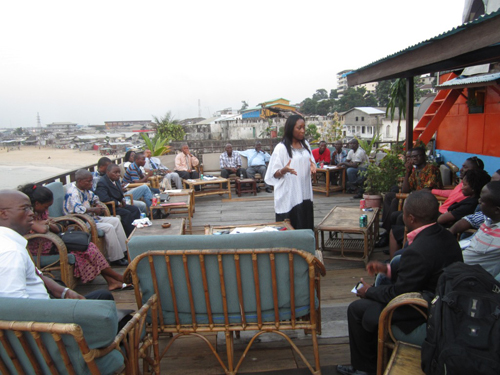 My colleague Edith Jibunoh, from ONE’s Washington, D.C., office, and I led the meet up. I started off by giving a brief history of ONE and our work around the world to promote Africa’s development. In particular, I focused on our campaigns to engage our African members on issues around the continent and how we work to influence the policies of select African governments and institutions. 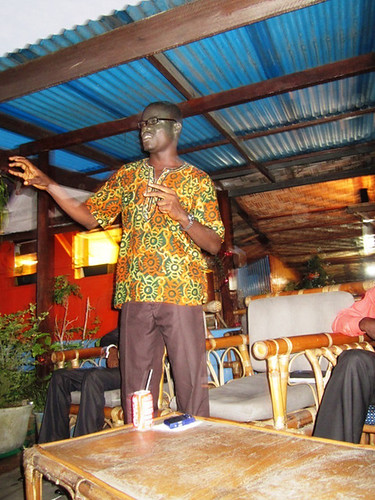 Edith then spoke about this week in Liberia and its importance in the greater scheme of development. The HLP would be using this week to listen to the voices of people through civil society organizations (CSOs) and the private sector on what the next set of development goals should include. ONE also used this week to launch a new report — Open for Development — that would make the case for some key recommendations to improve the post-2015 agenda. We launched this report in partnership with Save the Children with HLP members, which Liberian President Sirleaf joined!

All this talk from Edith and me created some palpable enthusiasm from our members – so they began sharing their thoughts on how governments and partners (like the United States or European governments) could support development.

For me, it was an incredible learning experience. Our members shared their particular sectoral concerns — clean water, HIV/AIDS treatment, environmental sustainability and education were mentioned, with clean water reiterated many times. More importantly though, our members shared how development should be made more accountable. They want the goals applied to everyone, rich and poor. We must speak in peoples’ vernacular languages (while Liberia’s official language is English, I can attest that the vernacular creole or “simple English” can be difficult to understand!) because illiteracy is so high in a country like Liberia.

We have to use radio and other more traditional forms of media to reach people, which I’m proud to say we are already doing here at ONE in our “You Choose” campaign in South Africa, Malawi and Zambia. There were even comments on the need to focus on better results and outcomes, which hits at the heart of our latest thinking here at ONE. You’d think these members were on ONE’s policy team!

Our ONE members in Liberia are incredibly astute. That was driven home to me when a member stood up and pointed out that amongst the 30 of us, they were the educated and relatively affluent in Liberia. The real voices ONE and the world need to hear are those not present and who carry the burden of these problems—and he pointed across the water to a beach where children were playing football in front of what appeared to be an endless see of tin-roofed shacks. My fellow ONE member couldn’t have said it better.