This week, ONE and Save the Children gathered close to 200 Liberians, including several Liberian ONE members, at a popular event in Monrovia, which included an exhibition and panel on transparency and accountability in the city’s iconic City Hall. 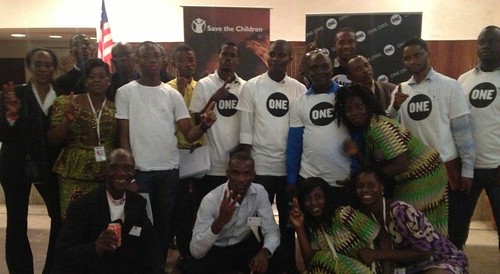 ONE members at the Liberia event

City Hall was packed all afternoon with the young and eager Liberians who gathered at our event, keen to join our efforts to focus attention on transparency and accountability and emphasize the recommendations, just released in a new report, for the UN High Level Panel (HLP) deliberations on the post-2015 Millennium Development Goals (or as we like to call it, MDG 2.0). 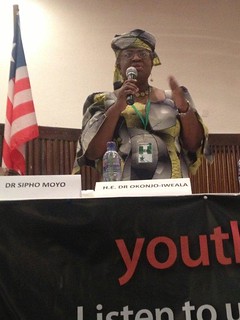 The event was attended by members of the HLP, including co-chair President Ellen Johnson-Sirleaf; Dr. Ngozi Okonjo-Iweala, Coordinating Minister of Finance and the Economy; Ms. Gunilla Carlsson, Swedish Development Minister; Ms. Betty Maina of Kenya; Mr. John Podesta, Chair of the Center for American Progress; Ms. Amina J. Mohammed, Special Adviser to the United Nations Secretary General on the Post-2015 Agenda; as well as members of the HLP secretariat and other Liberian dignitaries.

Involved in our exhibition were a variety of activists, including Ma Annie, who started the Liberian “Peace Huts” to mediate local conflict issues (land, marital and community unrest); Alfred Sirleaf, who started Daily Talk, a community blackboard which translates the news into vernacular and images in order to make news accessible to the illiterate; young Koola Fofana, who talked to mingling guests from her stand, and displayed her work on the President’s Vision 2030 committee, allowing her to channel youth voices into Liberia’s formal development planning. The exhibition also included the big draw for the many youth in attendance: Sweetz and David Mello – two Liberian music entertainers who worked on a song with young kids throughout the exhibition, encouraging them to express themselves and get involved in their country’s development through music. 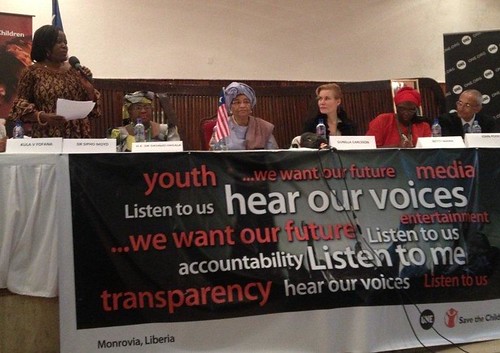 Speakers at the event 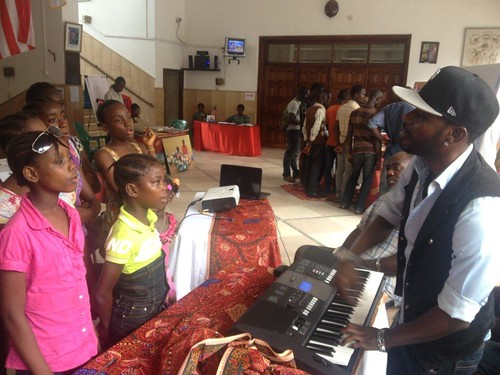 Sweetz and David Mello talk to children about music

The exhibition was quickly followed by five lively breakout sessions, where Liberian citizens organized themselves and came up with a range of recommendations for various facets of the transparency and accountability agenda, including the consultation process of how to get better data.

The HLP members were really impressed by the effort that the Liberians put into coming up with concise yet constructive inputs for them to take into consideration and individually commended their work after spending some time going through the exhibitions on display. 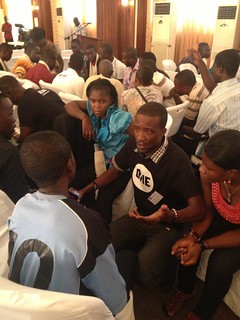 President Johnson-Sirleaf reminded the youth that Liberia’s future lay in their hands, while Dr. Ngozi Okonjo-Iweala remarked on the alignment of the issues raised by the Liberians and the HLP members. Ms. Gunilla Carlsson congratulated Liberia on the progress made under the leadership of President Johnson-Sirleaf and noted that their recommendations showed the dedication of the citizens to making their country a better place.

Ms. Betty Maina emphasized the importance of holding the private sector accountable alongside the public sector,stating that they also had a responsibility in ensuring that development goals were met, and she encouraged Liberians to demand accountability from the private sector as well.

Mr. John Podesta recognized ONE and Save the Children for the remarkable work we do and spoke of the trip that ONE organized that brought him to Liberia for the first time, where he was able to see firsthand the dedication of Liberian people to their development.

The entire event, which spanned about 6 hours, left all of us involved inspired and struck by the dedication these citizens put into communicating their views on development. We are all so proud to have been a part of the process that gave them a platform to get their views across to those that needed to hear it the most.

What would make the biggest difference in your world? Vote for the issues that matter to you most here, and we’ll share them with the HLP.