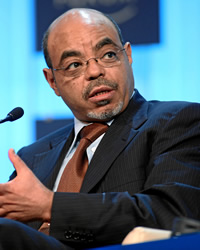 Here in Africa, death is often unexpected even when it is expected.  Many of us unrelentingly cling to hope, even when the writing is on the wall.  The continent may not be that surprised by the loss of Prime Minister Meles Zenawi, but, the continent certainly is shocked and feels the loss.

Africa feels the loss for a man who graced world stages and was often perceived as the ‘Voice of Africa’. He was the face for the African renaissance, at forums such as the G8, G20 and the World Economic Forum.

This is a double loss for Ethiopia, who also lost the head and patriarch of the Orthodox Church, Abune Paulos, last week. Some cultures in Africa may even link the two demises as belief that such a figure as the patriarch can never leave for the eternal journey alone.

Ethiopia’s transition looks peaceful so far.  A snap shot analysis of African head of governments or presidential elections held in 2012, is quite interesting.  I am quickly reminded of three other African countries which have lost heads of state in office this year. With the exception of Guinea Bissau, both Malawi and Ghana, had peaceful transitions of presidential power.  In all fairness, most heads of government elections held in Africa this year have been peaceful.  This is not to say they lacked intrigue, rather to highlight that they were not awash with bloodshed. Some countries have even seen peaceful regime changes.  These include, Lesotho and Senegal.  Countries like the Democratic Republic of Congo and Mali’s elections were not as smooth.

Back to the tragic situation in Ethiopia.  In the midst of this mourning period, already, many feel that Meles’ shoes will be hard to fill. Here is a man who is credited with turning Ethiopia’s economy around, from a paltry GDP growth rate of 3.8% when he took over in 1991, to a staggering  10.1% in 2010, according to World Bank figures.

Meles was sometimes referred to as the regional policeman in turbulent Eastern African times.  He made no apologies sending his troops to maintain peace around the region’s borders such as Somalia, Eritrea, Burundi , and was key in Sudan and South Sudan negotiations.  It’s therefore not surprising that the U.S. became an ally in its anti terrorism efforts. On the other hand, Meles received criticism from human rights organizations who criticized his government’s strict control over civil and political rights.

A paradigm shift beckons Ethiopia, at the close of one era, turns the leaf for the beginning of a new one. We hope the new era will spell further progress.