Edith Jibunoh, ONE’s director for multilateral institutions, is reporting from the UN High Level Panel on the Post-2015 Development Agenda in Bali, Indonesia, where she joined a team of ONE members in delivering your post-MDG petition signatures to world leaders.

Almost 15 years ago, as a young(er) diasporan African, I started working on my first developing country assignment, Indonesia – a country much like my own, Nigeria.

I could draw many parallels between the two former military-ruled, resource-cursed, and poverty-stricken countries. As a freshly minted development professional, I had all the ideals of a young graduate newly empowered with all the solutions to the world’s problems that I had read in books, and I felt ready to rule the world. 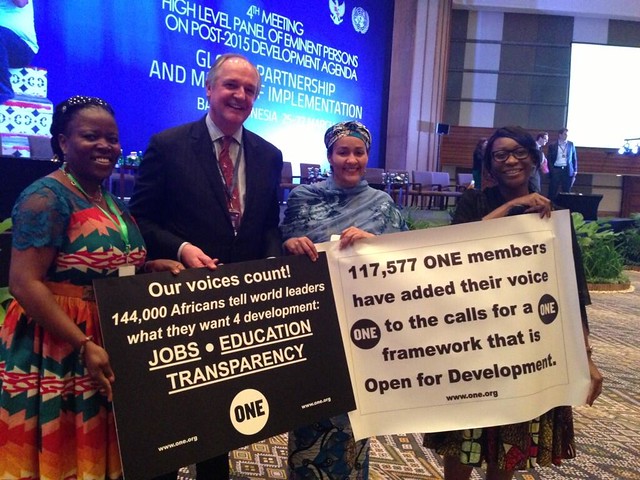 Within a couple of years, the UN Millennium Development Goals (MDGs), without any input from youth like me, were introduced to the world with little consideration for our sense of ownership for this new global development agenda.

Fast forward 15 years, and I have returned to Indonesia. A country that has since achieved measurable progress, and where civil society is active and engaged. My country is among many that have not followed this path, but the civil society, still finding its youthful voice, is joining the voices of thousands around the world to demand a seat at the table.

ONE is in Bali with some of the world’s foremost development thinkers, private and public sector officials, as well as vibrant members of this civil society, at the Fourth Meeting of the United Nations Secretary General’s High Level Panel on the Post-2015 Development Agenda. The panel members spent their first day listening to civil society lay out their desires for a new development framework that they hope will speak to all of their concerns.

The voices here are urgent, backed by hundreds of thousands more, aided in their journey to Bali by the innovation in technology that has birthed movements of voices from around the world seeking to define the new development agenda. 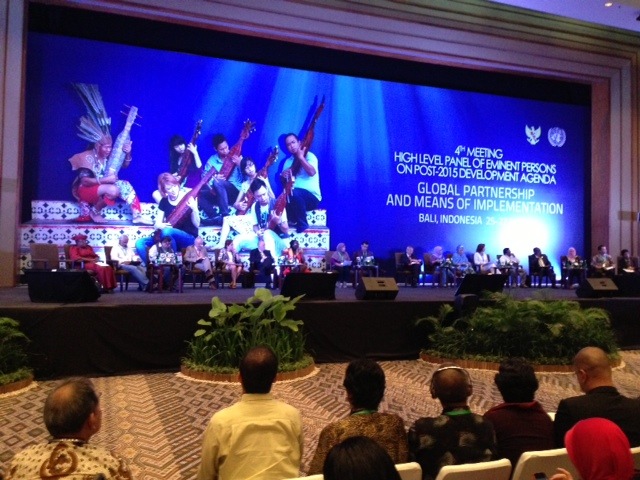 Members of the High Level Panel

Fifteen years ago, there was no such force defining the MDGs – and young people were certainly not a part of their design. But today, young people around the world are participating in efforts like My World and our complementary You Choose campaign, defining their dreams for a future that will deliver a global development agenda that works for them. It’s a BIG IDEA!

Technology today has allowed for hundreds of thousands of voices to be a part of this conversation.

Fifteen years ago, this “big idea” was still waiting to be born.

Earlier in the day, we presented two of ONE’s recent campaigns to members of the HLP. Our Open for Development petition collected 117,000 members’ names in support of an open development process, based on the outcomes of priorities defined through consultations. Our You Choose campaign, our effort to demonstrate the consultation process in practice, collected 144,000 answers from citizens in South Africa, Malawi and Zambia, defining what they want their development future to be premised on.

The busy day at the HLP meetings wrapped up with our participation in Restless Development’s “Big Ideas” event, where ONE Africa Director Sipho Moyo presented findings from You Choose, which identified the priorities of jobs, education and transparency. Restless Development’s “Big Idea” would involve 3.5 billion people, the world’s youth, as the monitors of this new global development agenda. The audience at the “Big Ideas” event included Paul Polman, Chief Executive Officer of Unilever, and Justine Greening, Minister for International Development at the UK Department for International Development.

Both spoke of the power of data in the hands of young people who today utilize the information they gather with the help of technology in a way that previous generations were unable to, networking the information and bringing about change.

When we presented ONE’s campaigns to Paul Polman earlier in the day, he spoke of the collective action needed to achieve the MDGs while he recanted a story of a group of young people in the Netherlands who demanded he took a picture with them as they held a sign which said “We are a part of the solution, ARE YOU?”

Even if you’re no longer a part of the youth group, these big ideas are powerful and definitely worth supporting. Young people are leading the charge but we all need to be a part of the solution. All we have to do is listen to what the world is telling us.

The HLP continues their meetings over the next few days and we’ll be here, encouraging them to keep listening until their work is done.

Edith is tweeting from the High Level Panel. Follow her tweets at @didijibs.