Liberia was Africa’s first republic, colonized in 1822 and declared independent in 1847. It is also home to Africa’s first female president: President Ellen Johnson Sirleaf. I met with her last week at the Executive Mansion in Monrovia during a ONE listening and learning trip. And while this was not our first encounter, I was particularly thrilled to be meeting her with ONE’s new Chief Executive Officer, Michael Elliot, who was visiting Liberia for the first time. 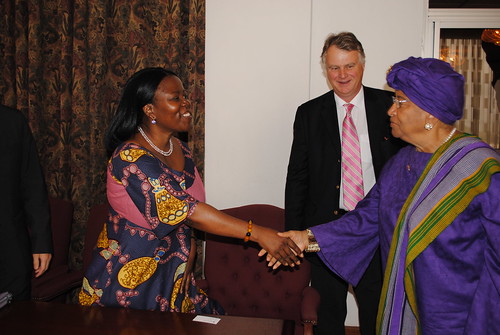 At ONE, we strongly believe that for poor rural populations throughout Africa, smart investments in agriculture are key to reducing poverty, building viable livelihoods and accessing affordable food. Meeting with President Sirleaf Johnson was a great opportunity to find out how committed Liberia’s President is to agriculture development.

No surprise, but definitely noteworthy: as an African woman, “Mama Ellen,” as many Liberians call her, does not just speak about agriculture — she is a farmer herself who grows rice, chilies and vegetables,  and when she talks about the need for farmers in Liberia to move from traditional farming methods, which erode the environment, you get the sense that the Iron Lady, knows exactly what she is talking about. A recent report by Liberia’s Ministry of Agriculture echoed her concern.  The report states that future efforts in Liberia need to focus on productivity enhancing measures with a pro-poor focus that increases incomes. According to the Minister for Agriculture Dr Florence Chenoweth whom I also had the privilege of meeting during this trip, Liberia’s challenge is two fold; one is that Liberian’s lack access to assets like land, knowledge and inputs and two, opportunities and an enabling environment.

Agriculture was not all that was on the President’s mind on this day.  Another one of her top priorities is education particularly tertiary educational and vocational skills training. According to UNICEF, education in Liberia was severely affected by the First and Second Liberian Civil Wars, between 1989 and 2003.  Therefore, while the country has seen a large increase in foreign direct investment in sectors such as mining, forestry, and now petroleum, the potential for Liberians to get good jobs is limited by a mismatch in the required skills. Corporations that have a presence in Liberia will need to step up and invest seriously in vocational training for their workers, in an effort to fill the skills gap.

The mother of four is up for re-election later this year, and one of the key challenges surrounding her election is allegations of corruption in some sectors of government a fact which she openly alluded to during our discussion as unjustly undermining the governments efforts to rebuild the nation. A report by the Voice of America (VOA) points out that the head of Liberia’s anti-corruption commission is asking for direct prosecutorial powers to go after government officials misusing public funds. Still, it is clear as President Ellen Johnson Sirleaf points out in her campaigning for re-election, that her government’s fight against corruption has helped to restore investor confidence in a country still recovering from 14 years of conflict. On the other hand, says VOA, political challengers question the president’s commitment, saying her government has too much influence over what should be independent investigations. From speaking to other government officials and some of the youth we were left with the distinct impression that the judiciary in Liberia is extremely independent and not likely to be much influenced by either the executive or the legislature. Those around President Johnson Sirleaf will tell you categorically that her work is her campaign. And based on the incredible transformation from the Liberia I saw five years ago when I attended her inauguration – little more than a depressing ruin – to what I saw this week – a much more organized, energized, optimistic and promising country with some well chosen cabinet members I’d say Mama Ellen should keep doing what she does best. Leading Liberians to their promised land!.