When Bob Collymore, CEO of integrated telecoms operator Safaricom;  his counterpart from financial services boutique Kenya Commercial Bank Group, Dr Martin Oduor-Otieno;  a number of peers from the Media Owners Association  and the local branch of relief agency Red Cross launched the Kenyans for Kenya initiative earlier this month, loud yawns must have been audible across the land. 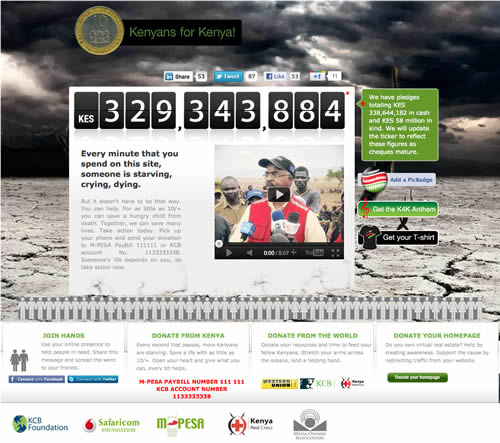 Loud yawns not just because Kenya is in the throes of its worst famine in six decades, with at least five million people, most of them inhabitants of the hugely lawless, arid North facing starvation and the real spectre of death…But loud yawns largely because famine in Kenya is not news.  In fact, one does not need any qualification in Metereology to predict, with a measure of accuracy, when the next bout of mass hunger will visit our land. It visits us, with the time-keeping instincts of a Parisian metro train, every five years. Do the math to ‘prophesy’ the next one…

And as happens with everything that occurs with a certain measure of predictability, famine in Kenya has its traditions, rituals, language and symbols. One of these traditions is the banding together of a number of companies, normally from different industries (you do not want to sit in the same meeting with your competitor, do you? They might just learn your latest trick!), under some fancy brand umbrella “to do something for our starving brothers and sisters.”

Dark suits then go through the motions of presenting huge dummy cheques and flagging off lorry-loads of food meant for the North. Then we wait for another five years to mount another bout of corporate philanthropy. Sadly for many Kenyan companies, this is the alpha and omega of CSR strategy. So what makes Kenyans4Kenya any different?  Here’s a list of why this initiative has become the refreshing and celebrated novelty it has evolved into.

By the time the last full stop was put on this piece (August 20 at 10.00 am), the Kenyans4Kenya Fund had realized Sh309 million in cash (with an impressive Sh154 million from M-pesa alone!) and Sh338 million in cash pledges and Sh58 million in material pledges, Clearly, the race is on to meet the new Sh1 billion target, upped from the previous Sh0.5 million which was hit in a week!

The author, a former Business Editor at the Nation Media Group, works at Safaricom as Senior Manager-Public Relations. The views expressed here are his own.