Africa is the youngest continent in the world – By 2050, half of its population will be under the age of 25. The number of people working will far outweigh dependents (elderly or children). This is a huge opportunity for countries to break the cycle of inequality and poverty.

However, this potential will only be realised if Africa’s young population is educated and employed. Agriculture and agribusiness could be key.

Growing youth unemployment, ageing farmers and declining crop yields under traditional farming systems mean that we must find a way to engage youth in agriculture.

But most young Africans see agriculture and agribusiness as an unattractive and unsustainable way to make a living. Viewed as a life of drudgery and manual labour, with poor security and few rewards.

Education steers students towards white collar jobs, and away from rural self-employment. The benefits of agriculture need to be taught in schools and colleges, alongside modern methods that harness the power of new technologies.

Young Africans have grown up with technology in the palms of their hands. They ‘get it’ and coming up with innovations is second nature to young entrepreneurs striving to make a difference. Agriculture needn’t be seen as toiling the fields, it can be cutting edge.

The rise of tech-prenuers such as farmcrowdy (a phone app that crowdsources finance for farmers by allowing users to sponsor farms) is also changing the future of farming.

If Africa’s agricultural sector can harness the power of the tech savvy, the green revolution can go to new heights.

And, as agricultural productivity grows, food becomes cheaper, meaning households have more income to spend on non-food items. This then creates more demand for goods and more employment in non-agricultural jobs.

It’s crucial that young, rural women have better access to education and are taught entrepreneurial skills…

In Thiar village, about 70km east of the capital Dakar, a group of women have set-up a shared garden after joining the ‘Bay dunde’ (Production for Subsistence) programme.

Supported by Hilfe für Afrika/Wasser für Senegal the women use a simple irrigation system that enables them to grow crops throughout the year, even during the dry season. A solar powered pump pushes water through a long hose with small holes in it, giving plants just the right amount. The smart system amazingly uses 80% less water compared to watering by hand.

The new irrigation system has led to immediate benefits. Thanks to improved nutrition, children are performing better at school, girls spend less time collecting water and the pump even has an attachment for charging mobile phones, meaning fewer long walks to the nearest town to recharge. 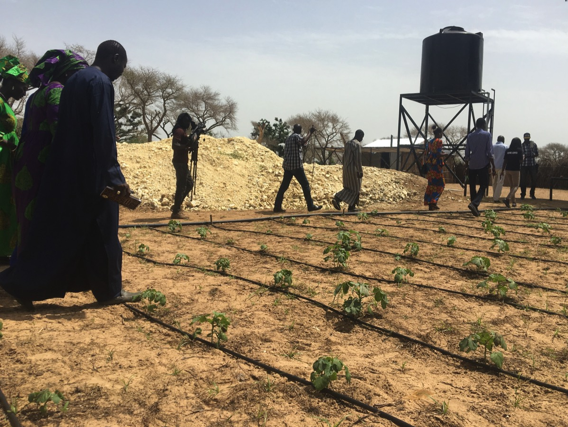 Investing in the future

Back in 2014, ONE launched the “Do Agric, It Pays” campaign – over 2 million Africans called on governments to keep their promise to invest in agriculture and support smallholder farmers. At an AU Heads of State summit in Malabo, Equatorial Guinea, African leaders recommitted to allocate 10% of their national budgets to agricultural transformation.

ONE continues to make sure African governments fulfil their Malabo declaration.

Today, ONE’s CEO Gayle Smith is at the Africa Green Revolution Forum (AGRF) 2019 in Accra, Ghana. It’s an unmissable chance to debate and share ideas, and see first-hand how new technology and farming methods are transforming and boosting agriculture. Watch this space for updates!!