COVID-19 vaccine inequity is set to worsen unless urgent measures are taken to accelerate vaccine production and distribution globally. Most low- and middle-income countries failed to achieve the WHO target of vaccinating at least 10% of their populations by the end of September. Only 15 African countries met the WHO target, with huge variations among this group. For example, 72% of the population in the Seychelles has been vaccinated, compared to just 13% in Rwanda.

Rich countries, on the other hand, are giving booster shots to the fully vaccinated. More than 6 billion doses have been administered globally, but 3 out of 4 doses have been administered in rich countries. “The rich world’s stance is not simply ‘me first’, but ‘me first, second, third, and fourth,’” commented Nick Dearden, director of Global Justice Now.

To reverse this injustice, activists are mounting pressure on vaccine manufacturers to share their technology in order to boost vaccination production globally. WHO is leading an initiative called the COVID-19 Technology Access Pool (C-TAP) to facilitate the establishment of hubs to transfer mRNA-vaccine technology and provide appropriate training to manufacturers in low-income countries. The mRNA technology is being proposed because of its adaptability to COVID-19 variants and because many of its technical features are free of intellectual property rights in many countries.

Many governments and organisations are lobbying pharmaceutical companies to waive intellectual property (IP) rights on their COVID-19 vaccines to allow other manufacturers to produce the vaccine locally. At last month’s UN General Assembly, Peruvian President Pedro Castillo urged Western pharmaceutical companies to demonstrate their commitment to international cooperation and global solidarity by sharing their coronavirus vaccine patents. Supporters of temporary waivers on IP rights for COVID-19 vaccine argue the pandemic is unprecedented and calls for extraordinary measures. 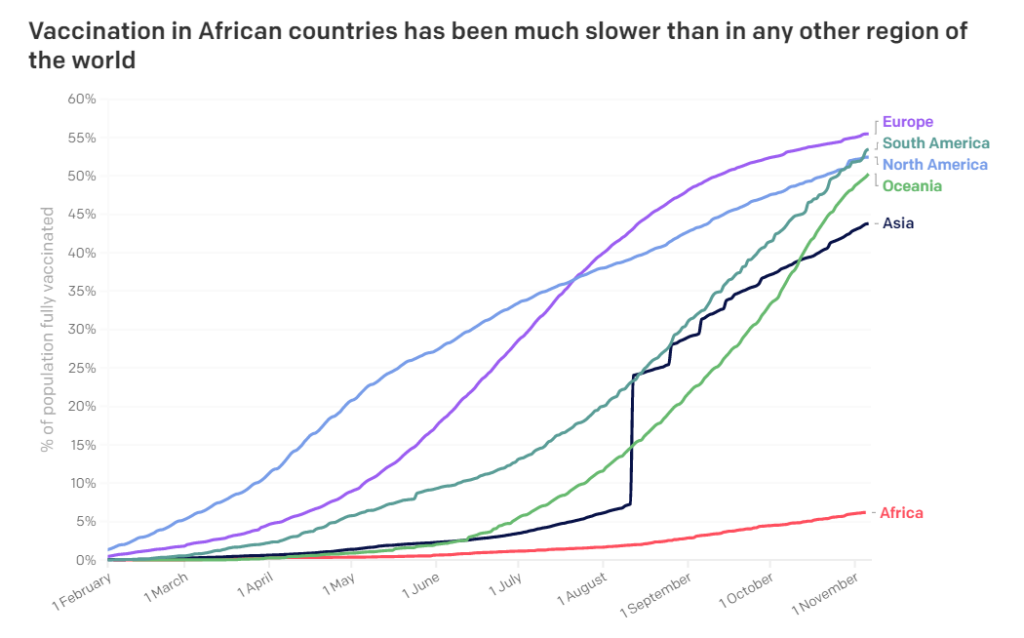 Big Pharma is resisting calls for technology transfers and waivers on IP rights over concerns for property rights. Campaigners say that vaccine manufacturers are monopolising vaccine production to boost profits, in part by prioritising sales to rich countries, which are willing to pay more for the vaccines.

Companies producing COVID-19 vaccine have made huge profits during the pandemic. Pfizer/BioNTech anticipates revenue of $33.5 billion in 2021. Moderna’s revenue has increased dramatically, from $67 million in the second quarter of 2020 to $4.4 billion in the same period in 2021. Johnson & Johnson forecasts $2.5 billion in vaccine sales in 2021. And even though the British-Swedish company AstraZeneca has pledged to supply Oxford University’s COVID-19 vaccine “at no profit during the pandemic,” it reported revenues of $1.169 billion from the vaccine in the first half of this year. (AstraZeneca was the first to commit doses for the COVAX facility.)

“At the heart of today’s stark, unacceptable, and unnecessary COVID-19 vaccine inequality is the world’s collective dependence on a handful of pharmaceutical corporations that hold the power to decide now many vaccines get made, who gets them, and at what price,” stated the People’s Vaccine Alliance. “All vaccines, old and new, only come down in price once there are multiple competitors in the market.”

“Pharmaceutical companies are holding the world to ransom at a time of unprecedented crisis,” says Anna Marriot, Oxfam’s health policy manager. “This is perhaps one of the most lethal cases of profiteering in history.”

Diversifying production of vaccines across different geographical locations would help tackle the current vaccine access issues. For example, earlier this year, the Indian government banned the Serum Institute from exporting vaccines after a sudden rise in COVID-19 infections in India, which resulted in increased domestic demand for vaccines. This seriously impacted the distribution of vaccines through the COVAX facility in low- and middle-income countries. The Serum Institute is a leading supplier of AstraZeneca’s Covishield vaccine to the facility.

Relying on vaccine donations has also proved to be risky. Countries that receive vaccines through donations by individual countries or through the COVAX facility are never quite sure when the vaccines will be made available or how many will be delivered. This impacts their ability to meet their national vaccination targets. Manufacturing the vaccines domestically would significantly reduce the risk of supply not meeting demand.

Producing vaccines locally would also make vaccines less costly. “Enabling developing country manufacturers to produce vaccines is the fastest and surest way to ramp up supply and dramatically drive down prices,” says Maaza Seyoum from the People’s Vaccine Alliance Africa. “When this was done for HIV treatment, we saw prices drop by up to 99 percent.”

The People’s Vaccine Alliance, a coalition of nearly 70 organisations, says that COVID-19 vaccines would be much cheaper if big pharmaceutical companies were not monopolising production. Its analysis shows that the leading mRNA vaccines produced by Pfizer/BioNTech and Moderna could be produced for as little as $1.20 per dose, yet COVAX has been paying, on average, nearly five times more.

In October 2020, India and South Africa put forward a proposal to the WTO’s Council for Trade-Related Aspects of Intellectual Property (TRIPS) for pharmaceutical companies to waive IP rights on COVID-19 vaccines for at least three years. In May, the US government joined more than 100 WTO member countries in expressing support for such a waiver.

The European Union and some countries, notably the UK and Germany, have vigorously resisted a TRIPS waiver. These countries, like the big pharmaceutical companies, argue that intellectual property rights are the cornerstone of research and innovation, and must not be waived under any circumstances, even a pandemic. They are also reluctant to make these vaccines available for free. In April, some of these pharmaceutical companies launched the “IP PACT,” which reinforces their support for IP rights.

The argument that vaccine producers have to recover their research and development costs – and therefore cannot share their technology or distribute vaccines for free – does not hold much water. The development of COVID-19 vaccines in rich countries was largely bankrolled by the EU, UK, and US. Almost all of the funding for the development of the AstraZeneca vaccine came from the UK government and charitable organisations. The Pfizer/BioNtech vaccine received $445 million from the German government. Pfizer/BioNtech also received $17.3 billion in advance purchase agreements from the EU and the US. Moderna received $1.4 billion from the US government to develop and test its vaccine and $8.1 billion to provide the country with half a billion doses The US government contributed $5.75 billion for the development, clinical trials, manufacturing, and purchase of the Moderna vaccine and partially funded research and development activities for the J&J vaccine.

However, none of these governments placed conditions on pharmaceutical companies to share the technology once the vaccines were developed and approved. The US government has stated that it does not have the authority to do so.

“Despite receiving billions of dollars in government funding and advance orders which effectively removed risks normally associated with the development of medicines, vaccine developers have monopolised intellectual property, blocked technology transfers, and lobbied aggressively against measures that would expand the global manufacturing of these vaccines,” says a new report by Amnesty International.

Amnesty says that the handful of companies that developed the COVID-19 vaccine should ideally have been the “heroes.” But instead they created an artificial scarcity of the vaccine by not supporting measures to ramp up production and equitable distribution. Although some vaccine developers have shared their knowledge and technology through bilateral agreements, these are not on a scale to meet the needs of the current public health crisis.

Making vaccination accessible to all also makes economic sense. Increased production and supply at lower cost could potentially save the world economy trillions of dollars, according to the IMF, which calculates that vaccinating up to 60% of the population in every country would cost $50 billion, compared to the $4.5 trillion the global economy would lose if vaccination rates are not accelerated in least vaccinated countries.

Rasna Warah is a Kenyan writer and journalist who is working with the ONE Campaign’s COVID-19 Aftershocks project.