I recently had the honor of meeting Dr. Mphu Ramatlapeng, minister of health for Lesotho. She was in Washington, D.C., for a series of meetings with the Stop TB Partnership, working to raise awareness for tuberculosis and other global health issues with ministers of health from South Africa and Swaziland. 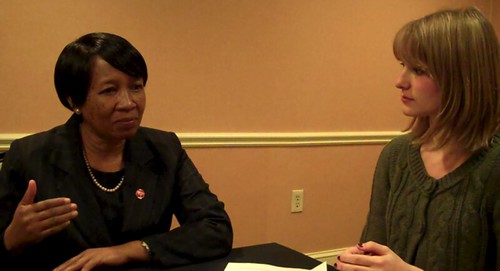 How is Lesotho doing on the prevention of mother-to-child transmission (PMTCT) of HIV?

In Lesotho, the possibility of achieving what was once an elusive target — an AIDS-free generation — is very real. In some of the most difficult to reach, very remote areas, we’re now having children born HIV-free. We are actually a model country for PMTCT efforts in the sense that we didn’t adopt single dose nevirapine [a cheaper, less effective PMTCT treatment regimen] from the onset, but instead we adopted the best lines of treatment — much earlier than South Africa, in fact. Every pregnant woman in Lesotho in the last five years has been tested and followed by community health workers from village to village.

We also were proud to launch in Vienna last year the Mother Baby Package — an invention of Lesotho — that makes it easier for mothers who cannot return to a clinic to receive the basic services they need to stay healthy and give birth to HIV-negative children. It’s actually quite impressive; you should come to Lesotho to see it!

Much of southern Africa faces an enormous disease burden from HIV, TB and other health challenges. How is Lesotho working to train and retain health professionals to address this problem? How are you working with your neighbors in the region?

This is a very important issue for us, and we are making sure that the health professionals are working in environment that encourages their retention. Health care and education in Lesotho are free, and we know that we need to train our own people to have our people committed and staying in Lesotho. We’re working to build our own medical school, and we need to elevate the medical professional in our society, so they know they are as important as the economists (who are often better paid).

In the region, we’re working to harmonize treatment and referral protocols to deal with high rates of migration in and out of South Africa. We’re also working closely with regional mining houses, Ministries of Labor, the World Bank, the Stop TB Coalition and the 14 other countries of the Southern African Development Community (SADC) to ensure better health across our borders.

The Global Fund is key. Without the Global Fund, there would be no ARVs, no TB medication, or even health systems strengthening. The Global Fund for us is the single most important vehicle for care and treatment in our part of the world; we feel very fortunate in Lesotho to have won a grant in nearly every round. What we are advocating for is that even though bilateral resources are important, the resources of Global Fund should increase.

However, in Lesotho, we felt that for treatment, the government should be doing 60 to 75 percent of the financing for health from the government’s own coffers. That way, if for whatever reason the money is withdrawn from donors, there aren’t so many people left without any medication. We do still need assistance with other components of health — laboratories, retention strategies, the next generation of tools like GeneXpert for TB.

Who have you been meeting with while in DC, and what have your messages been?

I’m here for the Stop TB Report launch and meetings with key decision makers in the US government, including AIDS Ambassador Goosby, the head of NIH, and congressmen — both Democrats and Republicans. We have found these meetings quite eye-opening; most people don’t know exactly how we feel about resources coming from the US government, so our message was very simple: “Their hard earned dollars are being spent for the right causes.”

For TB, we want to make people aware that TB is a neglected disease that doesn’t respect any borders, so any of us are susceptible. TB is gaining ground, it’s getting stronger, it’s laughing at us — we need money for new tools, to accelerate the new vaccine development, for new drugs. We need to elevate the knowledge of decision makers and advocates to know that TB is a killer.

ONE just launched a global campaign on child vaccines. Can you tell me what role immunization has played in your country?

My country as you know is a small country; immunization is seen as part and parcel of life. Every child has a right to vaccination, although because of poverty levels and mothers’ deaths, we do have gaps in coverage. The question is what kind of vaccinations do you have access to? For instance, pentavalent is very important for us, and so we have launched that vaccine in Lesotho to protect against an array of diseases. But we also need to vaccinate against cervical cancer, rotavirus and pneumococcal disease.

What message would you send to ONE members who advocate in support of smart, effective investments in Africa and in global health?

My message is a message of encouragement. We in Africa are very hopeful because we have ONE member as our partners in the fight against poverty and diseases. They must really go for it, they must continue assisting us, and whenever possible they must call on people like me to speak on behalf of the causes that they stand for!

Major thanks to David Bryden and the Stop TB Partnership, who made this interview possible