This blog was written by Obinna Onuoha, a ONE Champion in Nigeria.

My joy was inexplicable when I got my visa to travel to France as a ONE Champion representing Nigeria! I was invited to participate in the advocacy and policy campaigns for the Sixth Replenishment Conference of the Global Fund to end HIV, tuberculosis and malaria for the next three years.

I started volunteering for ONE in Nigeria during its advocacy and campaign to urge the Nigerian government to allocate at least 1% of its Consolidated Revenue Fund (CRF) to the national budget, for the implementation of the Basic Healthcare Provision Fund (BHCPF). After that, I felt motivated to push for more investments within the Nigerian health systems, and I felt the Global Fund was  another way of steering the country towards achieving  universal health coverage .

So I was thrilled to be traveling with ONE to the Global Fund replenishment. My trip to Lyon began on 5 October when I got the call to pick up my visa by 9am, before my 11pm flight. As I frantically packed and prepared for the trip, I couldn’t have known what the next few days had in store — and that we’d reach the historical goal of $14billion in pledges to end HIV, tuberculosis and malaria. 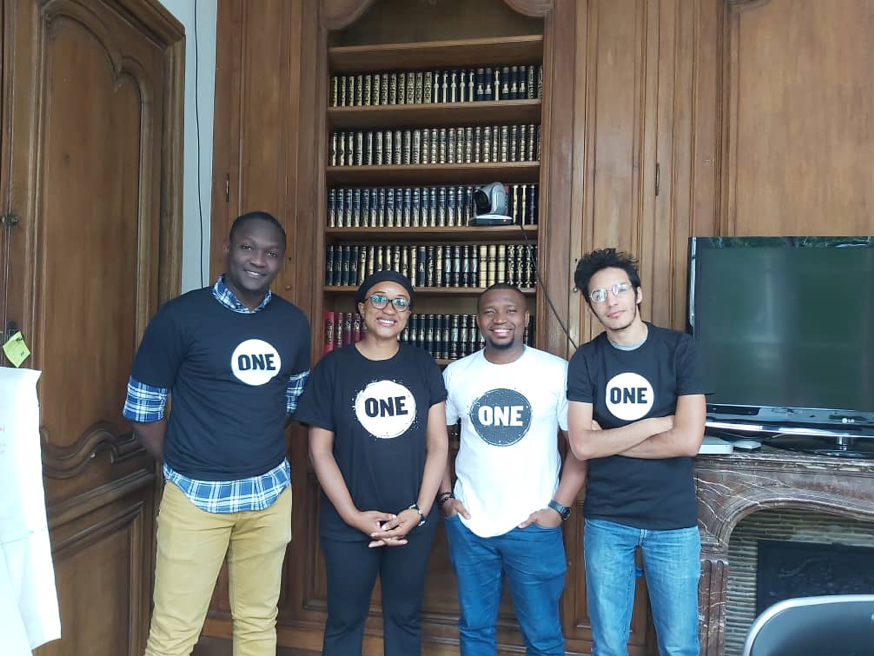 Obinna ONE champion from Nigeria, Hawa Semega from Mali, Boniface Bekangba and Yacine Belhadi from France

My journey to Lyon

It had been a while since I traveled to Europe and the international wing of the Nnamdi Azikiwe International Airport in Abuja looked very posh and modern. Soon enough, I was on board a Turkish Airlines flight to Paris, via Istanbul. I was very impressed with Turkish Airlines – they had swapped plastics for the meals with recyclable and reusable utensils in a drive to make our seas clean, blue and habitable for future generations.

Nine full hours later, and we touched down at Charles De Gaulle Airport in Paris on 6 October. I took an Uber to Paris France Hotel in the very heart of Paris, on the 3rd Arrondissement. From what I gather, Paris is like a spiral of streets, starting at the center with the 1st Arrondissement. Oh, my driver was Algerian and loves football!

Welcome to the Cold

Coming from a tropical country, Paris was cold. Not Scandinavian cold, but still cold! The next morning, I met up with my ONE Champion counterpart from Mali, Ms. Hawa Semega, and we walked to the ONE office in Paris. The team in Paris was so excited to meet us and we felt so welcome! We got debriefed on our activities in Lyon and did a few Q&As for an Instagram video.

By 4pm, together with members of the Paris team, I boarded a two-hour train for Lyon. Day 3 started with ONE business – taking walks for strategic photoshoots with ONE messages and street murals. Lyon is indeed a beautiful city! Parks, bridges, waterways, buildings and every kind of transportation – and I mean skateboards, scooters, bicycles, motorbikes, cars, the whole lot! There’s something for everyone, even babies. But I digress. 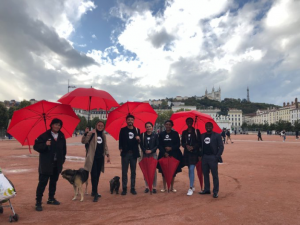 Obinna and ONE youth Ambassadors from Europe

On 9 October — the day before the replenishment — I took more photos with awesome street art by RED artist @_faith47. Then I met with Mrs. Connie Mudenda who shared an inspirational story as an HIV-positive person.

The day progressed and I got ready for the Global Fund official dinner, hosted by the Mayor of Lyon in the majestic City Hall of Lyon. It was a grand venue with top Michelin chefs. My most memorable moment was the handshakes and selfies with French President Emmanuel Macron (he actually took it himself, can you believe it?), Bono (ONE founder), Bill Gates, Gayle Smith (ONE CEO) and my very own Nigerian, Dr. Muhammad Pate of the World Bank.

And Yes We Did It!

And then 10 October had arrived – governments and private sector companies made unprecedented history by hitting the Global Fund goal of attaining $14billion in pledges to end HIV, tuberculosis and malaria!

And guess what? Nigeria increased its contributions to the replenishment by pledging $12million to the fund. That was another proud moment for me. 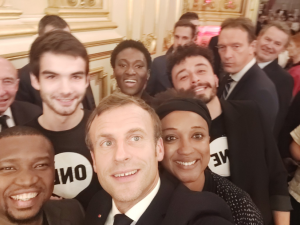 For me, it was time to take stock of the good work we did. By 6pm, I was on a train back to Paris. But there was something missing. I had to see the Eiffel Tower, considering its popular belief as the holy grail of Paris. It was magnificent in all its splendor especially in the night sky with all the lights.. I quickly took a cab to the Hotel Campanile Roissy and took a well-deserved rest. The next morning, I said au revoir to France and boarded a Turkish Airlines back home to Nigeria.

Thank you ONE for the wonderful moments in France! I definitely won’t be forgetting this anytime soon.