COVID-19 and its aftershocks are threatening to wipe out decades of hard-earned progress in the fight against extreme poverty. For the first time in more than 20 years, global poverty is on the rise. The World Bank estimated that the number of people living in extreme poverty globally increased by 120 million (including 40 million in Africa) in 2020 due to the pandemic. The outlook is grimmer still with a further increase of up to 40 million is projected in 2021.

Yet, the downward trend in fortunes is far from universal. The IMF predicts significant divergences in the post-COVID recoveries of advanced economies and those of lower-income countries. While advanced economies are turning a corner after pouring trillions into stimulus packages, for many lower-income countries, recovering even to 2019 growth levels could yet take years. Sub-Saharan Africa will be slowest to recover and risks falling behind the rest of the world.

Meanwhile, the global COVID-19 vaccine rollout has been astoundingly unequal, with rich countries pre-purchasing enough doses to inoculate their populations several times over. WHO head Dr. Tedros Adhanom recently lamented that just 10 countries account for 75% of all doses administered worldwide, which could unnecessarily prolong the pandemic for us all and condemn the African continent to more years of suffering. 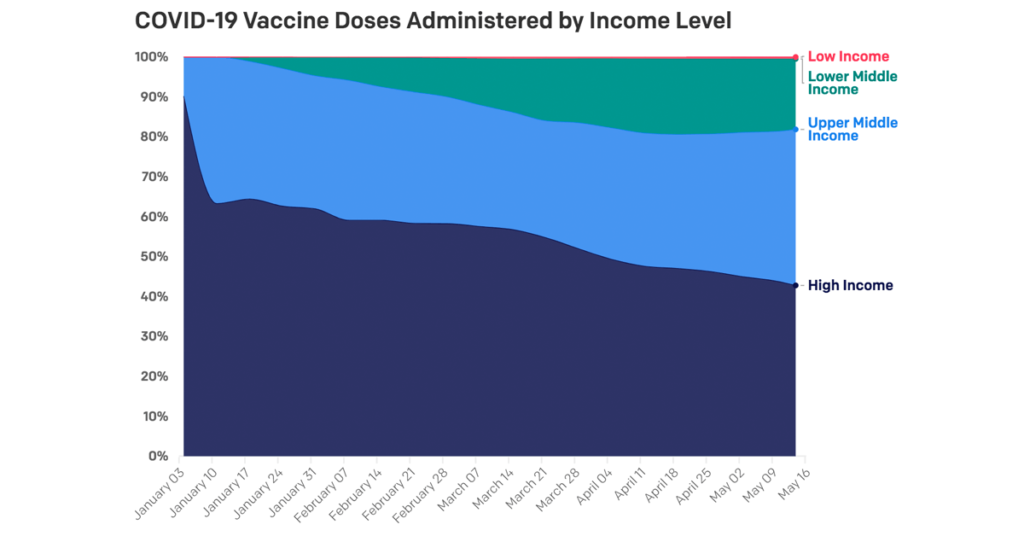 The immediate priority must be to save lives by ramping up the vaccine rollout. G7 countries can start by increasing access to vaccines by committing to provide at least 1 billion doses to COVAX no later than 1 September 2021 and more than 2 billion doses as soon as possible beyond that, and by stepping up to commit their fair share of what is required to reach global herd immunity ($36 billion of an estimated $66 billion).

Beyond this, Africa is facing immense financing needs. The continent will need an additional $285 billion through 2025 just to respond to the pandemic, and it could cost nearly twice as much to get countries back to pre-pandemic growth trajectories. A new allocation of $650 billion in Special Drawing Rights (SDRs) will help inject some desperately needed liquidity. However, only 5% ($33 billion) will go to Africa, compared to 44% ($283 billion) for G7 countries. Wealthier countries don’t actually need additional SDRs. That’s why they should quickly agree to recycle their SDRs to boost the IMF’s concessional lending capacity and through new instruments that will allow African countries to get back on track.

But SDRs alone can’t plug the financing gap. Multilateral development banks (MDBs) have an increasingly important role to play. However, recent analysis shows that they haven’t provided the surge capacity that was needed to help countries respond to the crisis. They can increase their impact by stretching their balance sheets — meaning by relaxing internal capital adequacy rules while protecting their triple A ratings to allow for more lending. Moreover, a rethink of how MDBs operate is timely and needed. Experts are calling on them to work as a more collective system, potentially even with a single overarching governance structure, to achieve greater scale and impact.

The World Bank has not stepped up as it should in the past year, with many African stakeholders remaining highly critical of its approach. However, the bank’s International Development Association remains an important funder of long-term development programs. This year’s early 20th IDA replenishment will be another opportunity to mobilize and channel more resources to low-income countries.

With IDA20 negotiations gathering steam over the summer and autumn, IDA donors and the bank need to step up – including taking step to ensure that gender equality is at the centre of its strategy. Although major donors are facing domestic fiscal pressures, they should — as a bare minimum — maintain their IDA19 pledges, and emerging, non-traditional IDA donors such as China should increase their contributions. At the same time, the World Bank should leverage IDA’s large equity base to raise more resources on capital markets.

Africa is facing a lost decade. Quick and concerted action from G20 countries working in partnership with African governments to support vaccine rollouts and economic response and recovery efforts can avoid a disastrous outcome. The time is now.

Sign up for our weekly Aftershocks email for more news and analysis.