Mouhamadou Bagayoko is a young Malian blogger, a member of the Malian Bloggers association, and a ONE member. He joined the ONE Campaign on a visit to the Koulikoro region of Mali to see the Benkadi group of female farmers.

In Tiéman, in the Koulikoro region of Mali, a group of women, called Benkadi, plays its part in the development of their community.

Benkadi is now more than 50 years old. It is composed of all married women in the village, and received its receipt of declaration of association in 2006. Composed of 135 women, Benkadi focuses on agriculture. “During the rainy season, we grow maize and rice. When the dry season arrives, we do market gardening,” explains Rokia Coulibaly, Benkadi’s secretary general.

In Tiéman, in the commune of Baguinéda (Koulikoro), the ONE Campaign organised a visit to the Benkadi group of farmer women’s field, which the women obtained as a result of the Land Tenure Law.

The women process products such as okra, onion, tomato, mango, ginger, and guinea sorrel. However, Rokia tells us that the dryer has been broken for several months. Another member of the group, Mariam Doumbia, points out that “the association does not have the means to repair it, let alone acquire a new one.” They also reported distribution problems related to prices imposed by traders, which are just too high. 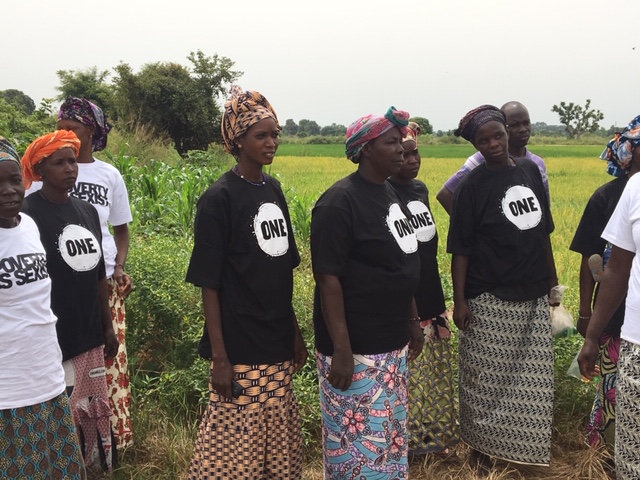 The Benkadi association is involved in the development of the village of Tiéman. The income from its activities is used to finance several actions. Every woman in the village can have a loan from the operating budget, without interest. That way, they don’t have to go to microcredit institutions. In addition, they are able to cover the school fees of the children as well as any other family expenses.

But the bravery of the women of Tiéman must not hide all the difficulties that they are facing, particularly the lack of exploitable lands.

“We only have two plots for gardening. The first measures half a hectare, provided by the village, and the other is a third of a hectare given by the government. The number of members of the association increases over time. We need more land, two hectares more if possible,” explains Rokia

The supply of water to market gardens during the dry season also remains a challenge.

According Oulie Keita, director of ONE Campaign in Francophone West Africa, “when we talk about women, we mean rural women. The survival of citizens depends on the work of our sisters and mothers living in rural areas: they must be supported.”

Oulie believes that these rural women must be enhanced by giving them more visibility. “The government has certainly done a lot by allocating 15% of the national budget to agriculture. However, there is still a lot to be done. These women do not necessarily have the financial means to maintain their land. They are in need of water, seeds, materials.”

“We need to find ways to grant them drilling, give them access to credits so that they can buy seeds, continue their processing to support themselves,” explains Oulie.

It should be noted that the Land Tenure Law stipulates that at least 15% of lands owned by the state or local authorities must be allocated to women and youth groups and associations in rural areas.

It’s important that we support these women and ensure they have access to the land and resources they deserve.