COVID-19 has exposed fault lines in both rich and poor countries. From failing public healthcare systems to racial inequality, the pandemic has laid bare unjust and inequitable structures that are failing the most vulnerable and marginalised groups. Poverty levels are rising globally. Between 88 million and 115 million more people were pushed into poverty in 2020 because of the pandemic, according to the World Bank.

In South Africa, the pandemic exacerbated inequality levels. This was evident during the protests and looting of shops that took place in major South African cities, including Johannesburg and Durban, after the jailing of former President Jacob Zuma. The riots left more than 200 people dead, and many political analysts claimed the riots were orchestrated by Zuma’s supporters who felt that he was being politically targeted. Even President Cyril Ramaphosa stated that the riots were an “insurrection” aimed at destroying the country’s economy and infrastructure.

But the emerging consensus now about the true cause of the riots is South Africa’s deeply fractured society, which has not completely healed from the wounds of apartheid. Television footage showed looters stealing essential items like food and pampers, suggesting that much of the looting was spontaneous and opportunistic, rather than organised. The unrest revealed a county with a sizeable number of people dealing with poverty and hunger.

The world’s most unequal society

With a Gini coefficient of 63, South Africa is ranked by the World Bank as the most unequal country in the world. This is a legacy of the apartheid regime and colonialism that relegated the majority of the black population to poverty and landlessness. The richest 20% of the people in South Africa still control almost 70% of the resources, nearly 30 years after a government was democratically elected.

Incomes are heavily skewed along racial lines. White South Africans, who comprise 8.4% of the total population, earn the highest incomes across all sectors. A 2020 Oxfam report warned that “inequality in South Africa is out of control,” noting that it would take the earnings of 461 black women from the bottom 10% of workers to make as much as the average white male CEO takes home in a year. 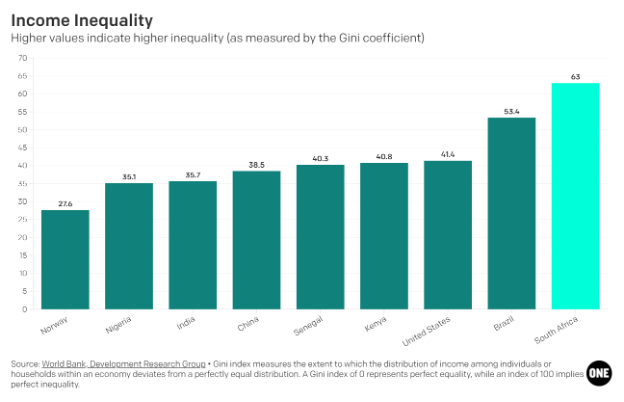 Income inequality in South Africa has led to other forms of inequality. Less than 1 in 10 black men have attended university, compared to 3 out of 10 white men. Unemployment rates among black youth are the highest of any group; 45.3% of black youth aged between 15 and 34 do not have a job, and black female-headed households are the most impoverished. About 4 in 10 black households in South Africa are headed by women.

The report blames a macroeconomic policy that does not support employment creation and a “minerals energy complex” that has shaped the entire economy and perpetuated inequality. “State capture” – a term that became popular during Jacob Zuma’s tenure when he was accused of collaborating with corrupt businessmen and contractors to siphon millions from government coffers – has ensured that only a few benefit from the country’s resources. The former president’s alleged nefarious dealings with the notorious Gupta family – who apparently selected ministers, awarded contracts, and set economic policy for the Zuma administration – cost the South African economy more than $80 billion, according to one estimate.

The COVID-19 pandemic made things worse for the ordinary South African. Food inflation has risen to 6.3%, the highest since 2017, and the unemployment rate rose to 32.6% in the first quarter of 2021. During strict lockdowns, two out of three people in the country reported not being able to work because of COVID-19 restrictions. South Africa has imposed harsh lockdowns since the start of the pandemic.

The Beta variant of the virus, which was first detected in South Africa in May 2020, took an additional toll on the economy. And the country is now currently experiencing a third wave of the pandemic as the more deadly Delta variant, which has been detected in more than 100 countries, replaces the Beta variant as the leading cause of new infections.

Low-income earners and those who are unemployed have been bearing the brunt of the pandemic, leading to increased levels of frustration and desperation, and culminating in the looting spree sparked by Zuma’s jail sentence. A Wall Street Journal article describes the human and economic cost of the pandemic on those in precarious or low-paying jobs: Sello Kgoale lived in a rented two-bedroom house and had a steady cleaning job before the pandemic. His mother-in-law and grandmother succumbed to coronavirus in the first wave of the pandemic. In the second wave, he lost both his job and his home. “I came to Johannesburg 21 years ago from the north, full of hope,” he said. “Now we have nothing left but anger.”

An Oxfam survey of 295 economists from 79 countries found that the majority of respondents believed that rising income inequality in their countries would be accompanied by increasing racial and gender inequalities. The survey’s findings noted that it took just nine months for the fortunes of the top 1,000 billionaires to return to pre-pandemic levels. But for the world’s poorest, recovery could take more than 10 years. If countries act now to reduce these inequalities, poverty levels could go down to pre-pandemic levels in three years, not the decade predicted by many economists, says Oxfam.

Organisations monitoring inequality levels in South Africa are calling for urgent measures to avert a prolonged crisis. “Long-term, socially sustainable distributions of income would require radical transformation of the economy towards more job creating, linking sectors that serve the needs of the population – for example via a developmental welfare state across health, education and other social needs – rather than the imperatives of profit and capital expatriation,” recommends the 2020 Oxfam report.

For more on the health, economic, and social impacts of COVID-19 in Africa, check out ONE’s Africa COVID-19 Tracker. It pulls together the latest real-time data from global institutions, governments, and universities about the impacts of the pandemic for the continent and for every African country – including information on food security. For more insights and analysis, sign up for our Aftershocks newsletter and follow us @ONEAftershocks.

Rasna Warah is a Kenyan writer and journalist who is working with the ONE Campaign’s COVID-19 Aftershocks project.