A roundup of the latest news, stats, and analysis of COVID-19’s impact in Africa. View our data tracker and sign up for our weekly newsletter, and read on for the latest on Africa’s third wave, how the pandemic is hitting Africa’s tourism sector, and how healthcare workers are storming markets to promote vaccine uptake.

Nothing we have seen before: This week was Africa’s worst since the beginning of the COVID-19 pandemic. Confirmed cases across the continent surged past the previous peak. Infections are now rising by 25% every week. The WHO’s Africa Director, Dr. Matshidiso Moeti said, “the speed and scale of Africa’s third wave is like nothing we have seen before.” South African President Cyril Ramaphosa said that the country’s health system is “buckling” as he introduced a two-week ban on all gatherings, and Liberian hospitals have started producing their own oxygen amid severe shortages. Sierra Leone also tightened restrictions this week following a 1400% increase in cases between May and June.

India scenario: It may be too late for vaccines to stop the “India-scenario” sweeping across the continent. Dr. Ayoade Alakija, co-chair of the Africa Union Vaccine Delivery Alliance, said, “we are in acute emergency mode,” warning that African countries are in desperate need of oxygen, field hospitals, testing, and health workers to combat the mounting crisis. Africa remains the least vaccinated region in the world, with only 1.1% of the population fully vaccinated.

Tip of the iceberg: Woefully low testing rates mean this data could be the tip of the iceberg. For the majority of African countries, there is no publicly available data at all on testing. New analysis from the ONE team shows that in Namibia, which is currently carrying out more tests per capita than any other African country, one in every three tests is coming back positive, compared to one in every 70 in the UK. The Economist estimates that the true death rate from the virus in Africa is likely to be up to 11 times higher than officially reported, potentially as many as 1.4 million deaths so far. 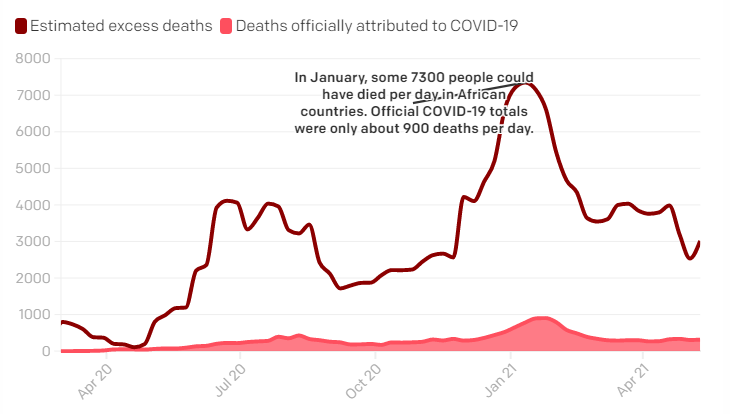 Wish you were here: The African tourism industry is set to lose up to $250 billion this year in lost earnings due to the pandemic. A new report from the UN Conference on Trade and Development predicted that the industry is unlikely to return to normal before 2023, as the lack of vaccines on the continent could keep tourists away for years to come.

K-shaped recovery: The heads of the IMF, the World Bank, the WHO, and the WTO said there is a growing danger of a “K-shaped recovery” as rich countries grow fast and vulnerable countries don’t. Speaking at a joint conference organised by ONE and the Paris Peace Forum, they called on G20 countries to embrace a target of vaccinating 40% of the world population by the end of this year, and 60% next year. They joined a growing chorus calling for the G20 finance ministers to take urgent action to end the pandemic at their meeting in Venice this week. IMF chief Kristalina Georgieva argued that faster access to vaccinations for high-risk populations could save more than half a million lives in the next six months alone.

Tax grab: Also on the agenda for G20 finance ministers will be plans to tax multinational companies more fairly. Sounds good on paper, but some developing countries argue that the proposal, which would introduce a global minimum corporate tax rate of 15%, would mainly benefit rich countries while emerging economies “may get next to nothing.” A rival plan developed by the UN Tax Committee, focusing specifically on the “digital giant” companies, has been backed by developing countries including Ghana and Nigeria, which argue that the UN plan better reflects their needs.

Double whammy: There are signs that the US Federal Reserve may raise interest rates sooner than expected, with potentially severe consequences for African economies. African countries borrowed heavily during the pandemic, as external debt in emerging markets globally grew by over $11 trillion. So if the Fed raises interest rates, many African countries could be hit with a “double whammy,” paying higher interest charges on larger stocks of debt. Carmen Reinhart, chief economist at the World Bank, warned, “that is bad, bad, really bad news for the emerging markets.”

Inflated costs: Africans are being hit hard by soaring global food prices. Rising inflation is having dramatic consequences in countries like Nigeria, where up to seven million more people have been pushed into poverty. Zambia’s inflation rate surged to a two-decade high on the back of rising meat, fish, and chicken prices, while families in Kenya are struggling to cope with huge increases in the cost of bread.

Outbreak²: Kenya is in a race against time to vaccinate 4 million children against measles amid a surge in cases of the disease. The country has launched a 10-day vaccination campaign that will target children aged nine months to five years in 22 of Kenya’s 47 counties. Measles is the third most common cause of death among children from vaccine-preventable diseases in Kenya, but the pandemic has caused a huge dropoff in vaccination rates; in 2020 only 85% of children had received the first dose of the vaccine and less than half had been given the second.

Bonds, Ghana Bonds: Ghana plans to issue Africa’s first-ever green and social bonds of up to $2 billion by November, making it the first African country to sell debt to fund development programmes. Ghanaian Finance Minister, Ken Ofori-Atta, said the proceeds from the bonds would be used to fund social and environmental projects, and to pay for the country’s education and health systems.

Two-tier travel: The EU’s newly introduced digital travel certificate discriminates against Africans. The Digital Green Certificate, launched on 1 July, aims to ease travel for people who are fully vaccinated or have recovered from COVID-19. But the certificate is not valid for recipients of the Covishield vaccine, which accounts for 90% of the vaccines distributed in Africa. This effectively creates two classes of vaccines, making travel to Europe next to impossible for most Africans.

Scaling up?: COVAX expects to have 1.9 billion doses of COVID-19 vaccines available by the end of this year, including 1.5 billion for low-income countries. Managing Director Aurélia Nguyen said this week that COVAX is diversifying its portfolio of vaccines by negotiating with new suppliers. The dose-sharing facility has thus far been beset by supply issues, as rich countries continue to hoard global supplies.

Sinopproved: South Africa approved China’s Sinovac COVID-19 vaccine in a boost to the country’s vaccination drive – 2.5 million doses have been approved for delivery, according to a statement from the Chinese embassy to South Africa. As it stands, only 5% of South Africans have been vaccinated, as confirmed cases in the country surged to record levels this week.

Market forces: Health workers in Cote d’Ivoire have stormed popular markets to urge traders and shoppers to get vaccinated against COVID-19. Armed with megaphones, they called on market-goers to register and receive their jab from a mobile health unit parked outside. The campaign is expected to be ramped up in the next two weeks to target more than 130 markets in the country’s financial capital city, Abidjan. Bravo!