A roundup of the latest news, stats, and analysis of COVID-19’s impact in Africa. View our data tracker and sign up for our weekly newsletter. This week, we’re covering mental health in the face of COVID-19 unemployment, the bitter combination of diabetes and COVID-19, and the pandemic’s pollution problem.

Face, meet palm: At least 1 million COVID-19 vaccine doses have been thrown away since last December in Canada, roughly 2.6% of the total number of doses delivered across the country. Some pharmacists are still being encouraged to throw away unused doses, rather than give them to non-eligible people. Meanwhile, only 6.9% of Africa’s population is fully vaccinated and COVID-19 deaths have increased the fastest in low-income countries, which have the lowest vaccination rates globally. Strive Masiyiwa, head of the African Vaccine Acquisition Task Team, says the African continent can no longer rely on donations and vaccines produced abroad and instead must build out its own vaccine infrastructure.

Going for bold: On Sunday, Kenya announced that unvaccinated people will be banned from certain places — including hospitals, bars, restaurants, and hotels — after 21 December. Less than 9% of the country’s population has been vaccinated, raising concerns about the feasibility and impact of the edict and timeline. The government plans to launch a 10-day mass vaccination campaign on Friday.

Abolish royalty: For the first time, low- and middle-income countries will have royalty-free access to a COVID-19 antibodies test. This could significantly advance those countries’ ability to track COVID-19’s spread and could compensate for another COVID-19 inequality: The daily testing rate for COVID-19 is 55 times higher in high-income countries compared to low-income countries. The antibodies test, which detects the presence of SARS-CoV-2 antibodies after an infection or vaccination, could also inform decisions on the need for boosters. This advancement comes thanks to a non-exclusive licensing agreement between the Spanish National Research Council and the WHO’s Medicines Patent Pool.

Inequality on display: As shoppers in wealthier countries invade stores this Black Friday looking for deals on the latest tech gadgets and toys, more than half of the world’s population is still trying to get its first COVID-19 vaccine dose. The disparity between the number of booster shots administered globally and first doses in low-income countries is increasing exponentially, at a rate of more than 6 to 1. Here’s what global vaccine inequality looks like, in one image.… 👇🏾 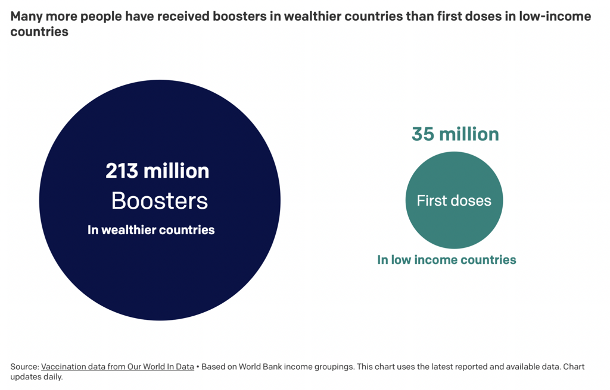 Malaria’s silver-lining? Malaria exposure may reduce COVID-19 severity, according to two new studies based on research from Mali and Uganda. Researchers in both countries found lower incidences of severe disease, hospitalization, and death for people exposed to SARS-CoV-2 in areas with high malaria rates. Amongst COVID-19 patients in Uganda, researchers found a link between previous malaria infection and lower levels of cytokines, a surge of proteins that cause an inflammatory response and tissue damage.

A hurdle to summit: During his trip to Kenya, Nigeria, and Senegal last week, US Secretary of State Antony Blinken announced that US President Joe Biden plans to hold a summit with African leaders (date not specified). Blinken signaled the Biden administration’s intent to overhaul the US’s relationship with Africa, which hit its nadir during the Trump years. Blinken got to see firsthand the outsized influence China wields across Africa, which has long made the continent a strategic priority while the US’s focus was elsewhere.

Locking down motivations: People’s risk perception of COVID-19 plays a large role in adhering to lockdown protocols. That’s according to a new study conducted in The Gambia, which matches findings from other African countries. It highlights that accurate pandemic information led to higher rates of citizens correctly understanding the severity of the disease and acting accordingly. Stigma and reputational risks also are strong drivers for people to follow lockdown rules, but at the cost of increased mental trauma and potential discrimination.

Dimming prospects? An agreement to waive COVID-19 intellectual property (IP) rights appears increasingly unlikely after the TRIPS Council failed (yet again) to reach an agreement. Or is it? The council agreed to continue meeting ahead of the WTO’s 12th Ministerial Conference next week, and its chair pledged “to make sure that no stone is left unturned” to reach an agreement. A new coalition government in Germany might support a waiver, which would be a reversal from the previous government’s position and potentially weaken the EU’s opposition. More than two-thirds of the WTO’s 164 members, including most low- and middle-income countries, has pushed for a waiver on IP related to COVID-19 treatments, tests, and vaccines for the past year, so far to no avail. Tick tock.

Seeking approval: Pfizer and BioNTech applied for approval of their COVID-19 vaccine for use as a booster in South Africa. If approved, it would be the country’s first approved booster. This comes as COVID-19 cases in South Africa are once again on the rise, with daily cases surging more than 11-fold over the past week, according to ONE’s Africa COVID-19 Tracker. With a third of South African adults fully vaccinated, and the potential of an approved booster on the horizon, experts hope a potential fourth COVID-19 wave would be less severe than previous waves.

FOCACal point: The Forum on China–Africa Cooperation (FOCAC) is next week, and we’re abuzz with the possibility that China could recycle 25% of its $41 billion SDRs and channel them toward the African Development Bank. This precedent-setting move would be in Africa’s and China’s (and everyone’s!) interests, and would build on growing cooperation between the continent and its biggest bilateral trade partner.