Gas station: Activists are accusing European leaders of treating Africa like a “gas station.” With concerns rising about Europe’s dependence on Russian gas, EU countries are turning to Africa for energy security. Meanwhile the latest report from the International Energy Agency shows that the number of people without access to modern energy is rising for the first time in a decade. Around 75 million people who recently gained access to electricity are likely to lose the ability to pay for it, and 100 million people may revert to the use of traditional biomass for cooking. Of the roughly 750 million people without access to electricity globally, 600 million live in Africa.

Extinction event: Without major commitments to curb emissions, the chances that we exceed 1.5°C by 2026 are now basically a coin flip. Only 29 (of 200!) countries made the September 2022 deadline to submit updated climate targets for keeping 1.5°C of warming within reach. At 1.5°C (2.7°F), heatwaves are over five times more likely to occur, leading to massive increases in heat-related deaths. Rising sea levels swallow low-lying countries, which are currently home to more than 600 million people. At 2°C (3.6°F), heatwaves will expose 400 million people to extreme heat globally, and nearly 20% of African species risk extinction. At 3°C (5.4°F), one-third of Lagos’s population is displaced by the sea, and virtually all African cropland becomes unviable for current species. And at 4°C (7.2°F), GDP per capita in sub-Saharan Africa falls by up to 80% by 2100. But of course curbing emissions is not politically feasible. 🤷‍♂️

What’s the damage?: Fierce debates landed loss and damage on the COP agenda for the first time. This could force attention on rich countries’ financial accountability to offset the costs of climate change that low-income countries can’t avoid or adapt to. Costs could amount to $580 billion a year by 2030. Austria, Scotland, Germany, Belgium, New Zealand, and Denmark have made pledges totalling $257 million. The US begrudgingly voiced openness after decades of “denial, delay and deception”. Sixteen states, including four from Africa, are calling on the International Court of Justice to weigh in. African countries contribute 4% to global carbon emissions, yet the continent is home to the world’s 10 most climate vulnerable countries – many of which are experiencing their 152nd drought since 2000.

Blistering attack: Barbados Prime Miniser Mia Mottley launched a blistering attack on rich nations, evoking slavery to make the point that climate change is a massive injustice. “We were the ones whose blood, sweat and tears financed the industrial revolution,” she said. “Are we now to face double jeopardy by having to pay the cost as a result of those greenhouse gases from the industrial revolution?” On a brighter note, her Bridgetown Agenda to reform the international financial system garnered the support of French President Emmanuel Macron.

Redemption Song(we): Cameroonian Economist Vera Songwe launched a new landmark report with the UK’s Nick Stern on climate finance needs. The world needs a breakthrough and a new roadmap on climate finance that can mobilise $1 trillion per year by 2030 for emerging markets and developing countries, excluding China. Resolving debt challenges will be central to the success of the plan as countries most vulnerable to climate change are also the most vulnerable to debt distress. South African President Cyril Ramaphosa said more climate funding needs to come in the form of grants and concessional loans, to avoid the continent ramping up debt, a message echoed by AU Chairperson and Senegalese President Macky Sall.

New rules: New lending rules drawn up by the IMF, World Bank, and others will allow indebted countries to pause debt payments after a climate-related disaster. Great news. But with increasingly frequent disasters, it’s unclear how long payments could feasibly be stalled. And it would only apply to future loans – excluding the $500 billion in debt servicing owed by the world’s most climate-vulnerable countries in the next four years. Meanwhile, the IMF backed debt-for-nature swaps, which would allow countries to restructure loans and spend proceeds on climate projects. High transaction costs and implementation ambiguity could hinder investor interest. 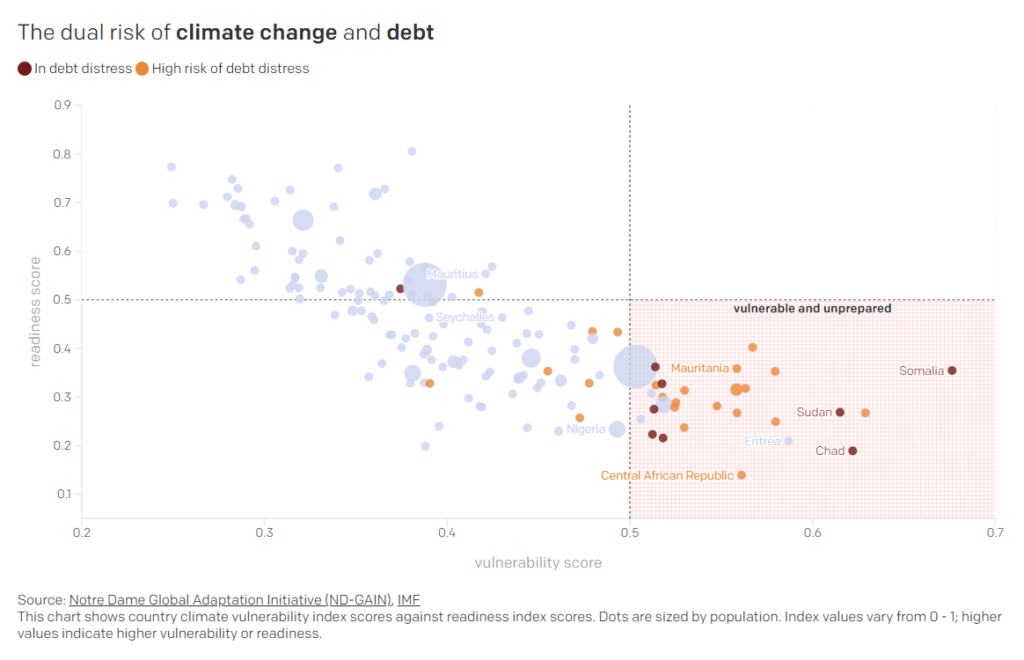 Lightning bolt: The plane transporting the World Bank’s David Malpass to Egypt for COP27 was hit by lightning on the way. Thankfully, no one was hurt. But let’s hope it electrifies the bank’s financing agenda, including their newly announced Global Shield Financing Facility. Achieving Africa’s energy and climate goals will require over $190 billion per year from 2026 to 2030, with two-thirds going to clean energy. Current levels of investment pale in comparison to what is needed. Just 2.4% ($55 billion) of global investment in renewable energy between 2010 and 2020 was in Africa.

Rank deception: Voluntary corporate pledges to reach net zero emissions are mostly full (literally) of hot air, according to a new UN report. Financial institutions that pledged to reach net zero are investing $8.5 billion in companies causing deforestation. Around 80% of global emissions are covered by pledges that commit to reaching net zero. The UN urged participating companies to end this “rank deception,” and stop new fossil fuel investments. Top asset managers have pointedly refused. Other banks are simply not including heavy-emitting sectors in their climate targets. 👀 Meanwhile, environmentalists dragged the new US carbon credit plan, designed to help developing countries transition away from fossil fuels.

Held prisoner: The continued imprisonment of political dissenter Alaa Abdel Fattah cast a long shadow over the week’s proceedings and drew increased scrutiny to Egypt’s abysmal human rights record. Elsewhere, climate activists were allowed to protest… with a *one-hour time limit* in a designated, heavily surveilled area. Not exactly a beacon of democracy. Most NGO observers were occupied with logistics, as they navigated canceled bookings, price hikes, and other unprecedented barriers (adding to existing ones such as visas and funds). Activists warn that civil society limitations and human rights concerns could damage the entire summit’s credibility.

From the ONE team