A roundup of the latest news, stats, and analysis of COVID-19’s impact in Africa. View our data tracker and sign up for our weekly newsletter, and read on for the latest on the looming third wave in Africa, Nigeria’s faltering economy, and the new vaccine that could give a much-needed shot in the arm to COVAX.

Tidal wave: COVID-19 cases are surging across Africa. The WHO said that confirmed cases rose by more than 20% since last week, calling for “urgent action” to curb the wave of infections. Uganda has seen an astonishing 2,800% rise in cases since last month, with reports of patients dying while waiting for a hospital bed. Rwanda, Namibia, and South Africa have also reintroduced restrictions in an effort to tackle the crisis. The African CDC Director John Nkenhasong warned that 14 African countries are “aggressively” heading towards a third wave, saying “you can clearly see that the variant that was identified in India is getting a hold on the continent.”

School’s out: Zambia this week implemented school closures and other lockdown measures for 21 days to curb the spread of COVID. School closures have been one of the driving factors behind the disruption of blood donations in African countries with far reaching consequences for patients with diseases like malaria and sickle cell anemia. Nigeria, which the WHO says already has some of the lowest blood donation rates, saw hundreds of units of blood expire due to the lockdown, while most of Ghana’s regular donation drives were cancelled. 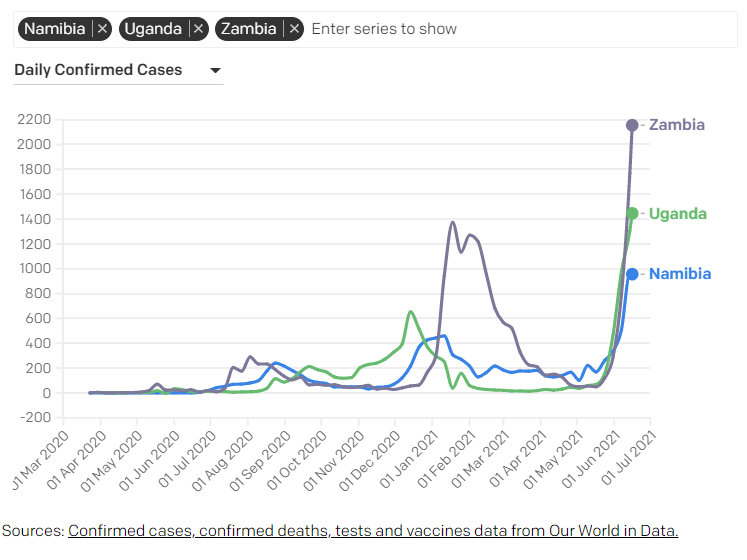 Shortfalls: The WHO predicted this week that 90% of African countries are likely to miss a target of vaccinating at least 10% of their populations by September, warning that Africa urgently requires an extra 225 million doses just to reach this goal. Shots administered in Africa plummeted from around 900,000 last week to as low as 500,000 this week. Meanwhile, an allocation of J&J shots to Zimbabwe has been delayed due to clotting and storage concerns. African countries are also suffering from a severe shortage of oxygen, with one Somali doctor saying that between five and 10 of his COVID-19 patients were dying because of a lack of oxygen almost every day.

Wrong direction: Global trade barriers related to COVID-19 medical supplies are on the rise, making it harder still to get vaccines and other treatments to those who need them. “The trend is going in the wrong direction,” said WTO head Ngozi Okonjo-Iweala as she urged WTO members to reach a deal by July on waiving drug firms’ intellectual property rights to improve access to vaccines.

Bulldozer in reverse: Tanzania is formally working to join COVAX. The country, which has a population of over 58 million people, is one of only four African countries that have yet to launch their vaccination drives. It’s the latest sign of Tanzania’s policy shift under new President Samia Suluhu Hassan, who has sought to improve the government’s handling of the pandemic following the death of former President John “The Bulldozer” Magafuli.

Could have been on Zoom: G7 leaders proved themselves irrelevant to the greatest challenge facing the world today as they met in the UK. Economist Jeff Sachs said the G7 Summit achieved nothing that couldn’t have been done over Zoom. Former British PM Gordon Brown called it an “unforgivable moral failure.” The trailed aim — a plan to “vaccinate the world” — disintegrated into a wooly commitment that will provide barely enough to protect 5% of people in low- and middle-income countries this year. The world needs 11 billion doses to reach global herd immunity. ONE’s David McNair has the skinny.

Cratering economy: Nigeria’s economy is being undermined by surging inflation, pushing 7 million Nigerians into poverty. One in three Nigerians in the workforce are unemployed, as personal incomes in the country are set to fall to their lowest levels in four decades. This has also led to a surge in criminality and violence, with kidnapping at its highest level in at least a decade. Bloomberg this week warned of the devastating impact of inflation in rich countries on poorer ones.

WTF: The Republic of Congo is being punished for the possibility it might request debt relief. Fitch Ratings lowered the country’s credit rating to CCC, making it more expensive for the country to borrow cash to fund its pandemic recovery. Fitch said this reflects “the possibility that the authorities seek debt restructuring under the Common Framework.” You can explore the breakdown of Congolese debt repayments using our Africa COVID-19 Tracker.

Bank boost?: Development banks from the G7 countries this week jointly pledged $80 billion for African firms and projects over the next five years. Meanwhile, the IMF has estimated that sub-Saharan Africa will need an additional $425 billion to fight the effects of the pandemic and reduce poverty between now and 2025.

Seen and heard: Women make up just 24% of the people heard, read about, or seen in the news. ONE is partnering with the Africa Women’s Journalism Project to change that. Our incredible cohort of 12 female journalists — from Ghana, Kenya, Nigeria, Tanzania, Uganda, and South Africa — will investigate some of the under-reported gendered dimensions of COVID-19 in Africa.

Car crash: The UK government’s aid cuts are a “car crash.” MPs released a damning collection of evidence in which dozens of NGOs, scientists, and other experts slammed the process, decision-making, and impact of the cuts. The Leprosy Mission England and Wales, which was forced to end projects aimed at ending leprosy in Mozambique, said the UK’s decisions “have put the health, livelihoods and education of millions of people who depend on UK Aid at risk.”

Super Novavax: Novavax, a small US-based biotechnology company, announced Monday that its COVID-19 vaccine is safe and highly effective. The vaccine, which Novavax hopes to begin distributing later this year, is easily transportable (only regular refrigeration required), and the company has pledged 1.1 billion doses to COVAX.

Secret deals: 6% of COVID-19 vaccine contracts have been published through formal channels, and much of what is released is heavily redacted, according to Transparency International. With total global spending on COVID-19 vaccines projected to reach $54 billion this year, the public ought to know if governments are getting fair deals.

In the dark: We remain alarmingly in the dark about COVID-19 vaccine deals, and we need a global commitment to share vaccine procurement information, argues the Center for Global Development.